It was my great fortune to make my first trip to Finland's largest, explicitly jazz focused festival, on two of the sunniest days of the very variable Nordic summer.

Summer festivals have been a feature of the music scene probably since time immemorial—Wolfgang Mozart was very familiar with the concept at least, writing commissions for evening fêtes and soirées. And it has surely always been an inescapable fact that the weather can make or break the show. All festival organizers and audiences have to contend with this unfortunate fact of life, and one can only guess how Wolfgang and company managed before the invention of waterproof fabrics. It was my great fortune to make my first trip to Finland's largest, explicitly jazz focused festival, on two of the sunniest days of the very variable Nordic summer.

Despite the previous lack of large venues and the distance from major European cities (Pori is nearly 250 kilometers even from Helsinki), the festival has built up a reputation for attracting major international artists. Undeterred by its apparent isolation, over the years the likes of Charles Mingus, Cab Calloway, Chick Corea and Herbie Hancock have appeared. Since the start of the new millennium, the roster has been extended to include names such as Sting, Santana and Stevie Wonder, which has succeeded in keeping the attendances for this 10-day long musical feast constantly well over 100,000.

The lack of sunblock in my logistical planning was down to expectations of a thoroughly wet sojourn on Finland's west coast, but the combination of a highly arboreal and hence shady setting, and the prevailing sea breezes, made the two day sojourn nothing less than superb. The festival is mainly spread along the southern banks of the River Kokemäki in the center of Pori, particularly along Jazz Street, a pedestrianized road running 200 meters beside the river. The two largest venues are accessed across any one of three bridges, on an island called Kirjurinluoto, situated between two branches of the river. Walking between concerts was a pleasure in the sun, though the hordes of bicycles showed that the local population were aware of the distances involved. A folding bicycle may well be among my luggage next time.

The lack of accommodation proved incidental with the official campsite affording apparently limitless flat space under the pines on the southern edge of the town. The trip into the festival area took 15 minutes by shuttle bus, and by the latter half of the festival week, it ran continuously throughout the day and into the early hours. Many local folks took the chance of earning some extra cash by renting out their apartments or houses for the week. In addition, there was simple dormitory lodging in some local schools for a modest sum, though it did not seem to be bookable by internet. The only major drawback of the event seemed to be that existential necessity of having to choose between simultaneously appearing artists.

For most visitors, this selection is less of a challenge as tickets for different venues must be booked separately with no day passes to be had. This is surely a factor of the multiplicity as well as the longevity of the event, this year being the 44th, and the last under the artistic directorship of one of the original founders, Jyrki Kangas. Even if he can be credited with much of the success for establishing and sustaining the event, he also must be held responsible for the festival's ventures into realms far removed from its original jazz intent. The most notorious of these was in 2002 the booking of ACDC from a fraudulent agent who absconded with the considerable advance payment. 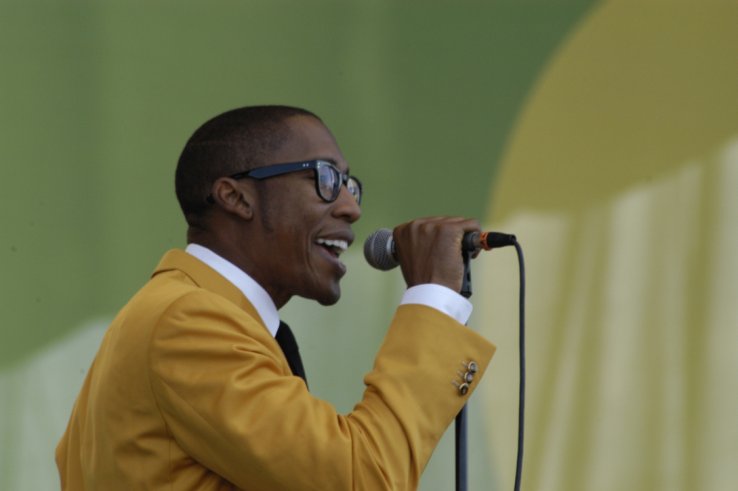 Kangas has frequently stated his aim to be "thinking big," and in all respects this year's program lived up to this, with the artist roster including a large proportion of acts well outside the jazz rubric. This is such an intrinsic part of the modern nature of the festival business that it barely merits a mention, except to congratulate the organizers for daring to continue the range far into the left field, including a stage (host to the Ultra-Music Nights) for acts so extreme that to classify them as music beggars the concept itself. Where else in such northern latitudes would one have the chance to see performances of such quality from international artists who normally are only found at clubs in New York, Paris or Berlin? Indeed the 'contemporary impro chamber opera' of the Free Tallin Trio with their guest double bassist Joelle Léandre, and the frenetic "dadaist" solo piano performance of Matthew Bourne, are unlikely to pass from my memory for years to come, creating new reference points for evaluating the extreme!

Since its inception in 1966, the Pori Festival has focused on international acts, many on the European summer circuit. With the exception of the selection of an Artist of the Year (this year being pianist Jaska Lukkarinen), the profile of Finnish acts has typically been low, making the bill less appealing to foreign visitors, but more attractive to the local fan base. This year's intention was to pay respects to the soul and funk traditions with a range of singers and bands from America's East Coast predominating over other sources.

At the marquee LP 44! stage, evening performances by the likes of the Hypnotic Brass Ensemble, the Nicola Conte Combo, and the Spanish Harlem Orchestra kept the groove going until the early hours. The exception to the American influence was the Ultra-Music program where cutting edge European names like Sophia Domancich from France, Norwegian Marja Ratje or Dane Stefan Pasborg were supreme.

Headliners on the main stage on the final three evenings were young Welsh soul celebrity Duffy, Texas' own Erykah Badu and Brian Setzer with his orchestra. These acts were supported in the two thousand plus seat arena by a string of excellent support bands, such as Pee Wee Ellis and his Tribute to James Brown, Roy Hargrove, Raphael Saadiq, Booker T. Jones and others, making the 6-hour plus show something of a fest-in. The audience was encouraged to bring picnics and snacks into the arena and make an entire afternoon of the program, unlike other venues in Pori and other festivals in Finland at least. The program outside the arena included a number of restaurant venues geared to a seated audience, such as Café Jazz and Klubben, and the local repertory theater featured international and Finnish artists. For the younger, late night attendees, there was also a selection of open air clubs sporting featured DJs along Jazz Street until the early hours. 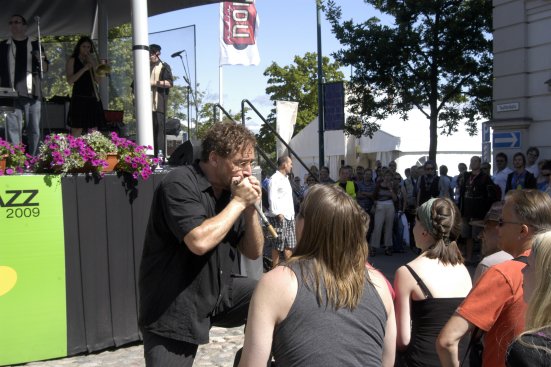 As one would expect at a festival of this size, there were a number of free concerts, including a children's program for the first five days, and day or nighttime concerts at the venues along Jazz Street. The best of these was the bandstand at the bottom of a hill running down from the theater to its junction with the Jazz Street. Sponsored by radio station Nova, many excellent acts from other venues also played a one-hour set for the local audience. One favorite act here was the New York-based Hazmat Modine. Led by the harmonica of Wade Schuman, the 8-piece amplified band played a mix of tunes revealing influences of klezmer, blues, jazz, calypso and more. Many pieces were written by Schuman, others included classics like "Who Walks in When I Walk Out," putting them right at the center of the crossover jazz nexus that one might consider the heart of the festival. Schuman's antics down among the audience suited to a tee the mix of passing youths, families and serious jazzers lucky enough to be in the vicinity. Behind him the vibrant, engaged band swung, shuffled or jived as the music required.

According to the official statistics for 2008, over 80% of the paying public came from outside the area of the city and its environs. This means that with just over 56,000 paying guests, the festival has become the seasonal financial backbone to a town that has seen the continuous loss of port and industrial workplaces since even before the recent recession. More to the organizers' credit is that 51% of the whole number are women, even if the proportion of lady artists on the roster was typically low. That few of these are from overseas is evident in the scarcity of signposting in anything but Finnish, but with English rapidly surpassing Swedish as the second language of almost everyone in the country, there is little difficulty in obtaining all services. In addition to the paying visitors, the citizens of the town itself are obviously key contributors to the life in and outside the venues themselves. Most of the vendors are local to the region, with this year's traditional festival burger, samosa and paella stalls supplemented by Finnish specialties such as bags of hot fried vendace, or reindeer strips served with berries and mash. To aficionados' chagrin, beer and other beverages are also limited mainly to Finnish brands, yet the national proclivity for over-indulgence was only minimally evident.

The average age of the attenders was not quoted in the statistics, but anecdotal evidence suggests that it was well less than 40, given the hordes of youths jumping around in front of the main stage, or spread out in the arena and in the city parks adjacent. What other guarantee could one hope for to provide a festival of this vintage with hope for a further 44 years?