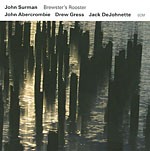 After a string of more jazz-centric ECM releases—1992's relatively free Adventure Playground, the large ensemble of 1993's The Brass Project, and the only document of his ongoing quartet with pianist John Taylor, bassist Chris Laurence and drummer John Marshall, 1994's Stranger Than Fiction—saxophonist John Surman's subsequent output for the label has consisted of unorthodox but no less intriguing projects. From solo recordings (1995's A Biography of The Rev. Absalom Dawe) and works for saxophone/bass clarinet and string ensemble (2007's The Spaces In Between) to continued exploration with drummer Jack DeJohnette (2002's live duet, Invisible Nature and 2003's expanded Free and Equal), Surman has consistently stretched the boundaries of composed and improvised music in ways no less identifiable for all its diversity.

Surman's voice remains distinct, but there's little doubt that fans have been clamoring for a return to more straightforward jazz territory and Brewster's Rooster does just that. Featuring two old friends—DeJohnette and guitarist John Abercrombie—and a relatively new acquaintance, bassist Drew Gress, it's truly timeless; undeniably modern, yet harkening back to ECM's late-'70s classics. Approaching seven Surman compositions, one standard (Billy Strayhorn's "Chelsea Bridge," an elegant ballad featuring Surman's deep-throated yet ever-lyrical baritone and DeJohnette at his textural best) and a tune by Peter Warren with unsurpassed grace, the group swings when required, but proves equally capable of unfettered freedom on the sketch-driven "Haywain" and idiosyncratic title track.

Surman focuses on baritone, featuring soprano only on Warren's lyrical and slightly melancholic "Slanted Sky" and the saxophonist's "Counter Measures," a tune of simmering intensity that also features some of Abercrombie's most empathic playing of the set, working hand-in-glove with Gress and DeJohnette in ways that recall his Gateway trio with DeJohnette and bassist Dave Holland. Gress is no Holland clone, however, but an elastic player capable of groove but less deeply immersed in it as Holland is. Instead, Gress works with DeJohnette, often suggesting more than is directly given, creating a feather-light but profoundly deep rhythm section capable of bringing Surman's sometimes pastoral writing to life.

At times harmonically ambiguous, Brewster's Rooster may be more decidedly jazz-centric but is no less adventurous for its relatively conventional format. Whether it's on the bright "Going for a Burton," the Latin-esque modality of "Hilltop Dancer," the fiery "Kickback" (featuring a duet between Surman and DeJohnette that's an album highlight) or lithely swinging "No Finesse," Surman is defined by relentlessly motif-driven melodism. Abercrombie plays both contrapuntal foil and harmonic accompanist, creating a delicately balanced group sound not unlike guitarist Mick Goodrick's classic collaboration with Surman on In Pas(s)ing (ECM, 1979), or positing how Gateway might have sounded on Homecoming (ECM, 1995), had it been expanded to a quartet.

As classic as this quartet's sound is, and how reverential it feels to ECM times past, Brewster's Rooster remains a thoroughly contemporary take on the jazz quartet. Surman rarely stands still, but this is one time where it would be wonderful if he could keep this group together long enough to record a follow-up or two.