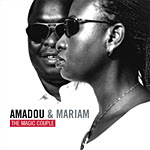 For most people outside Mali, and maybe France, Amadou & Mariam came out of nowhere in 2005 with Dimanche a Bamako (Nonesuch). But the duo had released three other, Paris-recorded CDs before their Manu Chao-produced breakthrough, which were themselves preceded by a series of cassette-only albums recorded in Cote d'Ivoire. The excellent anthology The Magic Couple cherry picks 76 minutes of beaten gold from the three earlier discs—Sou Ni Tile (Tinder, 1999), recorded in 1997, Tje Ni Mousso (Circular Moves, 2000), recorded in 1999, and Wati (Circular Moves, 2003), recorded 2001.

Amadou Bagayoko and Mariam Doumbia aren't the first husband and wife team to break out of Mali—in the 1980s singer and guitarist Ousmane Sacko and singer Yakare Diabate toured Europe and released an enchanting live album, La Nuit Des Griots (Ocora, 1987)—but they are the first Malian artists so successfully to fuse local roots music with a European pop sensibility. They were already looking beyond their birth culture in 1997, as four tracks from Sou Ni Tile reveal. "Je Pense A Toi" (check the YouTube clip below) foregrounds the Middle Eastern-styled violin of Sameh Catalan, "Combattants" and "A Chacun Son Probleme" feature harmonica player Loic Landois, and "C'est La Vie" includes the exuberant, Latin American-flavored trumpet of Barbaro Teunter. Weave into the mix Amadou's spangly electric guitar and the supple rhythm team of bassist Shihab M'Ghezzi Bekhouche and drummer Stephane San Juan, and the template for Dimanche a Bamako is already being drawn.

Other non-Malian instruments to be heard winningly on The Magic Couple include trombone, acoustic piano, Fender Rhodes, Hammond B3 and even a hurdy gurdy. The flute, too, blends magically with Amadou & Mariam's aesthetic. Three tracks feature the instrument. The first, "Mouna" ("I wonder why"), from Sou Ni Tile, finds Mariam sounding remarkably like fellow Malian singer Oumou Sangare (already a big star in 1997) in pitch, cadence and delivery, and the use of a flute, a signature sound on Sangare's albums from the very beginning, reinforces the impression. Mariam finds her own voice more completely on later tracks, from Tje Ni Mousso and Wati. On "Les Peuls," dedicated to the Peul (aka Fulani) people of the region, guest flautist Diourou Diallo is heard on the particular flute used in Peul traditional music.

Thanks to the legacy of guitarist Ali Farka Toure, Mali is synonymous with "desert blues." But "Chantez-Chantez," from Tje Ni Mousso is, at least in its verses, pure and unadorned Chicago blues, driven by Amadou's righteous, Muddy Waters-like guitar; the chorus is poppier and more upbeat, as you might expect from the hookline "chantez chantez, jouez jouez, danse danse."

It's just one of the examples on The Magic Couple of how Amadou & Mariam absorb and successfully recalibrate non-Malian styles. A great trawl through the couple's back catalogue.