Polly Gibbons: Jazz or Blues, It's The Feeling 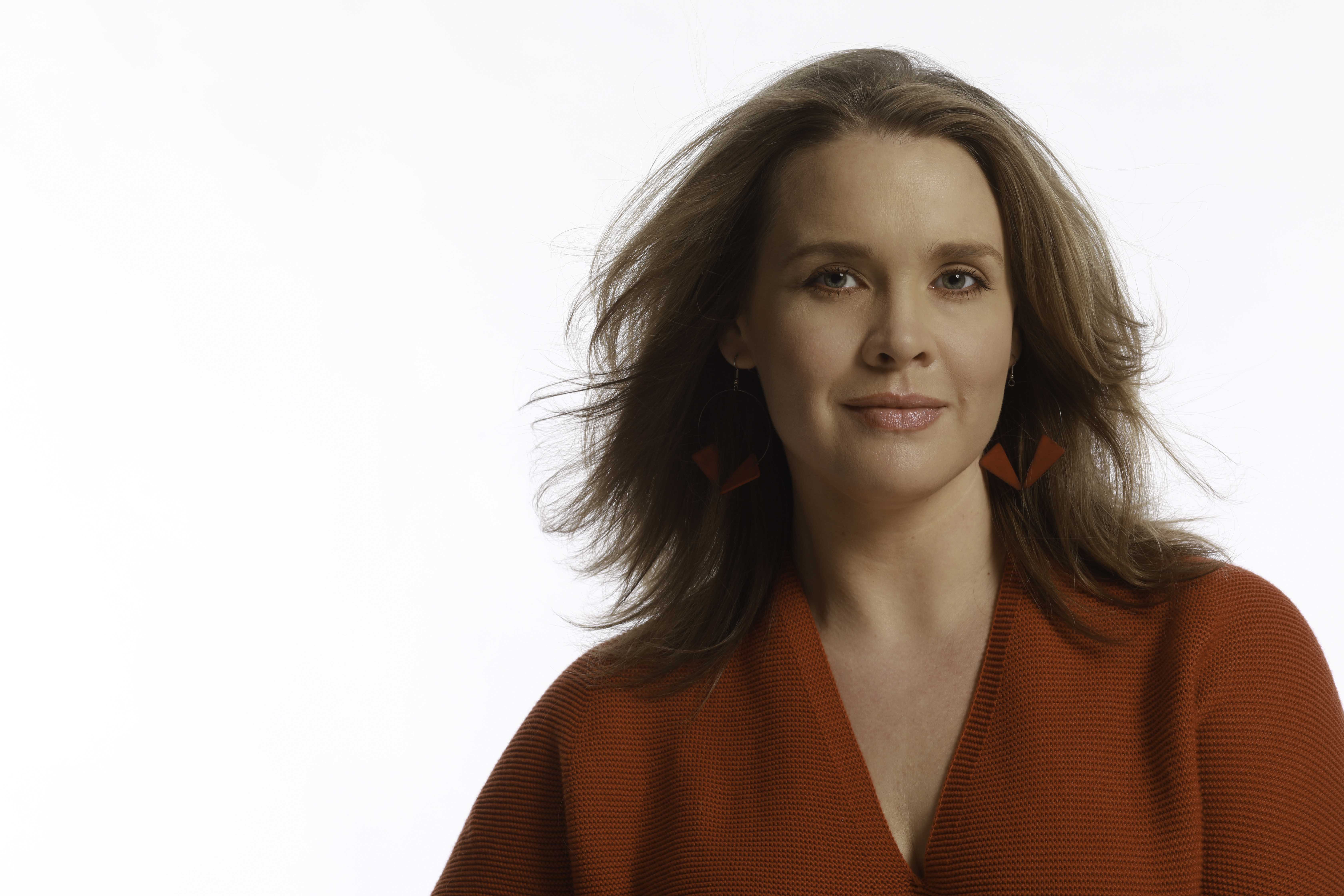 I can only sing what I feel. And great songs come in all sorts of genres, as far as I'm concerned. There is a melting pot of music.
—Polly Gibbons

British singer Polly Gibbons is past the up-and-coming stage. Her strong will, passion and impressive talent continue to propel her down a path where more good things are sure to come. An indication of her prodigious talent is heard on her latest release, and third for Resonance Records, All I Can Do.

It's a joyous romp through jazzy and bluesy standards. When she swings and sings jazz, gruff traces of the blues emerge through her rich vibrato. And when she sings blues, the free-floating change of phasing and melodic invention common to jazz is still part of the art.

"Jazz is a word that describes a genre. And this genre seems to have many, many sub-genres within it. There's such a variety. Diana Krall and Pharoah Sanders are highly different, and yet they're both referred to as jazz, under the jazz umbrella. It's kind of wacky, really. But the way I think about jazz music... At the heart of jazz is play, and improvisation and being in the moment. There will always be jazz parts to my music, whatever way I go. It's always going to be at the heart. I believe in the brilliance of the musicians and the intricacy and the possibilities of the music. I think jazz is a wonderful platform for that. Being playful and not repeating yourself constantly it very important."

"I will always have jazz firmly rooted in whatever I do, even the blues. I think it will always be there because it's such an important and brilliant kind of art form. I'm a bit of a jazz die hard. It's a very broad genre. There's always been this debate: Is it jazz? It's both restrictive, but also kind of fun to be playful and to feel a music in so many different ways and have so many possible interpretations. It's awesome how varied it is."

All I Can Do was recorded in 2018 at Power Station in New York City, a studio where the Rolling Stones, Paul McCartney and Sting have made albums. An audience was invited and the songs done live. It has spawned a strong touring schedule this year. Another step along the way for the girl who grew up with six siblings on a farm in Framlingham, a small town northeast of London and not far from the English Channel. It was not an area of musical activity, but Gibbons would occupy herself by singing.

Her talent, she says, "must have always been percolating. I realized had a natural flair for it quite quickly. It was always bobbing about in the background. But the actual time I realized I could sing was when I was about 13. I became more conscious of music, this amazing art form."

It was a cousin who brought it to her attention and a chain reaction occurred. "She made me sing to my sister. She told me to sing to my mom. My mom said, 'Do you want some lessons or something?' I said 'Yeah. I don't mind.' I went to a local singing teacher. She taught me how to breathe. Then she quite quickly sent me on my way to a local jazz player, because she could hear I had a lot of blues. I'm from a farm, so there's not a lot going on in the area. She could hear I had a lot of blues in my voice."

Around that time, her sister was playing a Billie Holiday record. "I remember exactly where I was when I first heard Billie Holiday sing 'I'm a Fool to Want You.' Immediately I was amazed by it. I wondered what on earth the it was? I was around 13. Then I joined a band at school. We did a few soul songs whilst investigating jazz. Being curious about it." There was no formal music education for Gibbons.

"I learned on the job," the affable Gibbons says matter-of-factly. "When I got to about 17, a great British jazz singer, Ian Shaw, put me forward for this gig in London, in a bar. I did it twice a month. That was a great training ground, working with musicians. I learned on the job. Luckily there were some nice people who pointed me in the right direction."

Gibbons was about 20 when Shaw introduced her to more of the London jazz scene. One night he introduced her to the 606 Club, a noted club in Chelsea, in West London. "That was my first jazz hang. And the first place in London that I started doing my own gigs," she says. "Then I started getting booked for playing in bars— cutting my teeth, learning songs, singing standards. Playing with different musicians. Then at some clubs outside of town."

Her influences in addition to Lady Day were Nina Simone, Donnie Hathaway, Randy Crawford, Bessie Smith, Betty Carter, Helen Merrill and Joni Mitchell. "When I rate jazz singers, first it's the voice. Do they have a voice I'm interested in or moved by?" she say. But it wasn't just voices she was hearing. "Singers do tend to be the focal point usually, because they're singing lyrics and telling stories. But I really want to be making music and listening and hearing. So I spent a lot of time listening to instrumentalists and getting stuck into their interplay.

Miles Davis was the first instrumentalist to get under her skin. "I got stuck into miles of Miles. Then I went backward. Oscar Peterson. Fats Waller I really loved. Louis Armstrong. Bud Powell. Kenny Kirkland. Phineas Newborn, Jr.. I'm into brass as well. Freddie Hubbard. After an initial flurry of singers, I actually stopped listening to them for awhile. I focused on trying to be very keen—keen to what's going on in the band, which I consider myself being part of. Creating."

In 2006, before she had released her first album, the BBC Jazz Awards nominated her in its Rising Star category. She opened for George Benson and Gladys Knight in their tours in the UK. As her career grew, she co-wrote an album with a London-area soul singer, Ola Onabule, and made an album with James Pearson, a pianist and artistic director of the famous Ronnie Scott's Jazz Club in London, called My Own Company . They took first place in the Indie International Songwriting Contest for their song "Midnight Prayer." That connection got her gigs as the warmup act for many artists at the club, including Van Morrison. Her career was building. Then, by chance, she met George Klabin, owner and producer at Resonance Records.

"A guy from the UK wanted to do an online digital TV station," Gibbons recalls. "He didn't have any money. He asked if he would be able to film me doing a song as an example of his recording work. Then I would have a nice demo for people, a video to put on a website or whatever. Quite by chance he took it too George Klabin and asked if he was interested in this blues and jazz TV program. George said, 'No. I'm not, but who's the singer?' That's how George and I came to make three albums together over the last five years."

A few years she moved up to being a headliner at Ronnie Scott's, and has made an impression in the States as well.

"In New York, you need to wheel and deal your way. Everybody is a singer or an actor. It helps to be connected," she says. Gibbons knew Mary Ann Topper, a renowned agent and manager who has worked with Herbie Hancock and Wayne Shorter, among others, and fostered the young careers of Dianna Krall, Joshua Redman, Christian McBride, Russell Malone and more. She had connections, as did Klabin. "Gianni Valenti at Birdland was very supportive of me and gave me my first gig in the club a few years ago. Then gave me a residency there last summer, which was nice. Mary Ann got me into the Blue Note and Dizzy's and Mezzrow." She's also performed at the Montreal Jazz Festival and the Pittsburgh International Jazz Festival.

All I Can Do has Pearson on piano, organist Shedrick Mitchell, guitarist Paul Bollenback, bassist, Richie Goods and drummer Mark McLean. Tamir Hendelman also plays on some cuts and did some arranging. Topper introduced her to the musicians. Klabin arranged the date for New York, rather than London. "George said 'Polly, you're really great live with an audience. You vibe with them' which I kind of agree with. It was fun," Gibbons says.

"The first album I did [Many Faces of Love] was more straight ahead. The last one, Is It Me had the brass section on it. This album is pretty jazzy, but also pretty bluesy. I'm definitely not just a straight ahead jazz singer. I love blues. I feel blues as well. I like doing more of that kind of sound. George was up for exploring that a bit more with me, which was good."

The new album includes Horace Silver's "Permit Me to Introduce You to Yourself," "Everything Must Change," standards like "Just a Lucky So-And-So" and "Anything Goes." She also dives into funky blues like "Some of My Best Friends Are the Blues," "All I Can Do Is Sing the Blues" and "I Want a Little Sugar in My Bowl." All are delivered with creative twists and turns, and with heartfelt emotion. Her jazz and blues chops are strong. Her voice flexible and expressive.

She can feel her depth and creativity growing through the process of her last few albums. And she's been taking more time recently, in down time before touring, to get deeper into songwriting. "It's been really good to get ingrained in the nitty-gritty of songwriting and crafting good songs and telling stories. It's felt an enriching experience, in a different way."

Gibbons, who is confident and engaging, adds, "I can only sing what I feel. And great songs come in all sorts of genres, as far as I'm concerned. There is a melting pot of music. People in the industry have said, 'You may have to narrow down your sound. You're very bluesy, very soulful, very jazzy. I don't know where to place you.' I'm into it all, so why not go for it? Why not enjoy it? Which is what I've been doing."

Her instincts have served this talented musician well.