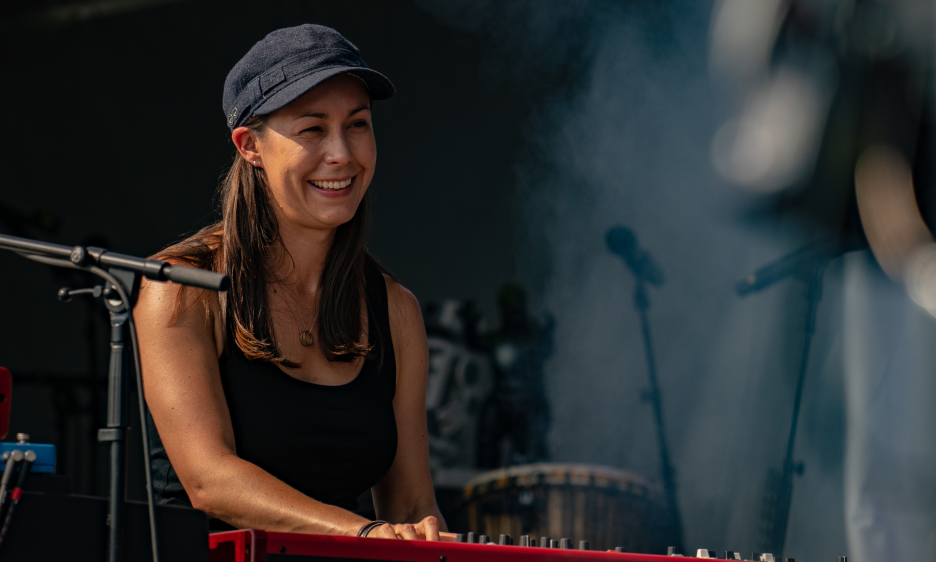 The bright, hot late afternoon sun hardly outshone keyboardist Holly Bowling's stage presence during Ghost Light's July 26th opening set on the main stage of Tumbledown. While she was unobtrusively navigating the quintet during an virtually uninterrupted hour of improvisational segues, this brilliant musician smiled regularly across the stage at her bandmates, while beatific grins often brightened her face under that trademark cap of hers as she soloed.

Yet Bowling's demeanor was hardly the only indication of Ghost Light's the significant evolution and marked improvement since their appearance at Higher Ground the previous November. In fact, their single set was an almost direct corollary to their studio album, Best Kept Secret (Self Produced, 2019), where structure encouraged discipline and in turn nurtured a heady, ethereal atmosphere. At Waterfront Park, the quintet displayed virtually none of their tendency to hang on to an idea too long: guitarists Tom Hamilton and Raina Mullen introduced brisk, complementary guitar figures to open "I Dare You" and then proceeded to play off each other with increasing intensity, during which time Bowling utilized her pianos to alternately fill the spaces and embellished melody lines.

Further elaborating upon the rhythms in "Keep Your Hands to Yourself." drummer Scott Zwang and interim bassist Dan Africano (in place of the departed Steve Lyons) pushed with increasing insistence to the first crescendo(s), whereupon the keyboardist took her first extended solo, around the thirty minute mark. It was a jaunty interlude that led to yet another series of dynamic ebb and flow passages wherein no notes were wasted and virtually none were superfluous. The drama was understated to be sure, but no less palpable for the absence of any histrionics from these musicians, and it certainly struck a responsive chord in the minimal audience crowded in front of the stage.

It was a remarkable exhibit of focus, perhaps contrary to Ghost Light's natural instincts, but one which continued for nigh on another thirty minutes. During this increasingly heated interval, guitar solos by both Mullen and Hamilton gave way as often to the steady rumble of the bass and drums—inordinately clear in the al fresco sound mix despite some occasional crackling toward the homestretch—as to Bowling's usage, in turn, of every one of the keyboards at her command: synthesizers had a resonance as full as the organ she played with such glee near the end of the show, that is, before her stage monitors failed, causing her rightful consternation and bringing "Fever Dreams" to a premature close.

A somewhat self-consciousness air permeating "Bullseye Blues" suggested Ghost Light don't quite feel comfortable enough to excel at more straightforward rock and roll. Paradoxical as it seems, the quartet may be better off simply succumbing to their main influences, Phish and Grateful Dead (even if they're not exactly quoting the latter's "Dark Star" or "St. Stephen"). Even so, the slightly abandoned denouement of "Don't Come Apart Just Yet, My Dear" made for an appropriately lighthearted closure to a deceptively ambitious set of music. the loud acclaim for which belied the unfortunately scant number of early arriving observers.

Relatively abbreviated as it was, Ghost Light's 415pm placement on this Twiddle festival bill may not invite altogether apt comparisons to their aforementioned Vermont performance or their recording, all the more so since the quintet's lineup has now been altered. Yet the group's consolidation of its strengths, centered for the most part around Holly Bowling, augurs well for the continued honing of its new chemistry.