BY DOUG COLLETTE
August 3, 2019
Sign in to view read count 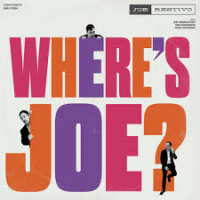 The title Where's Joe? carries a deliciously ironic subtext because guitarist Joe Restivo has hardly been an unobtrusive figure on the Memphis music scene. On the contrary, after having schooled himself on the history of the area as a flashpoint for blues and jazz, as a member of the Bo Keys, Restivo began making regular club appearances on and around Beale Street in the Nineties (not to mention venues and festivals all over the world). Accordingly, the vintage, plain design of this package, as well as the faux vinyl graphic on the CD, is a bit of a red herring, hearkening as it does to an era gone by. With this album, Joe Restivo proves good music is timeless and should be savored as such.

The fresh, vibrant interplay of the four musicians may or may not proceed from the rhythm section, but its sturdy stability allows Restivo to concentrate on his playing even as it frees saxophonist Art Edmaiston, once of JJ Grey and Mofro as well as the late Gregg Allman's final solo ensemble. In fact, the latter effectively introduces the album's relaxed atmosphere on "Bolivar's Blues," a (slightly retitled) composition by none other than Thelonious Monk, its beat held steady by bassist Tim Goodwin and drummer Tom Lonardo (who worked for some years with Mose Allison.

Restivo goes on to embroider the equally unpredictable melodic changes so typical of the iconic jazz pianist and composer. His fluid lines proceed from precise picking, relying less on volume than taste and discipline, virtues worth holding in high esteem in the modern age of the full-shred guitar heroes. Nevertheless, the quick-thinking of the interactions between this quartet of musicians is an elemental component of viable musicianship in general: on one of the three covers here, "633-Knock!," the deceptively lazy tempo at which the foursome proceed illustrates how navigation of changes at high speed isn't necessarily any greater a challenge greater than simply adjusting to leave space for each participant to both initiate and complete ideas.

Where's Joe? contains both original and cover material worthy of such honorable arranging and playing. In terms of the latter, Restivo draws a chart for "House of the Rising Sun" to reaffirm the durability and attraction of its melody. As a composer, he chips in four compositions, including the title song, the easygoing lilt of which is no less engaging than "Thelma" or "A Few Questions;" on the second, Edmaiston, Goodwin and Lonardo remind simplicity is as difficult as complexity to master. And on the exquisite balladry of the frontman's "Starlight Motel," it may at first sound self-evident to predict where the guitar, bass, drums and sax will go, but it is no less a pleasure to hear them arrive, in turn, at the prospective location at which each instrumentalist aims.

Kevin Houston is the man who so accurately recorded and mixed Where's Joe? to analog tape (with no overdubs) at Archer Record's Music + Arts Studio in Memphis. This engineer's previous assignments number such artists as Buddy Guy, North Mississippi Allstars, as well as the father of that band's principals, musician/producer Jim Dickinson (Kevin's relationship with whom blossomed to the extent the two worked together on many projects at the latter's Zebra Ranch Studio). Houston captures the warm ambiance that predominates here as fully and completely as the otherwise brisk likes of "Tiny's Tempo."

Having seemingly emerged from another time and place, Joe Restivo and company nevertheless remind in no uncertain terms—albeit in a gentle and understated approach—how a classic sound refuses to become dated. Where's Joe? will ultimately transport those who hear it to a wholly different place than where the listening began, a considerable feat worthy of placing this record on 'Best of 2019' lists.