By Mark Sullivan
August 23, 2016
Sign in to view read count
An assortment of striking jazz/improvisation recordings. Three of them are piano trios—each with their own unique character—but two of them have no piano, or any other harmonic instrument. 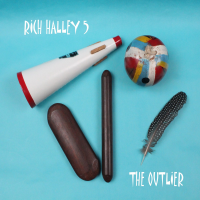 Tenor saxophonist Rich Halley's longstanding quartet with trombonist Michael Vlatkovich, bassist Clyde Reed and drummer Carson Halley—last heard on Eleven (Pine Eagle Records, 2015)—becomes a quintet with the addition of reed player Vinny Golia. Golia sticks to baritone saxophone and bass clarinet, which substantially augments the low end in these arrangements. When the horns play a head together—on the title tune or "Reciprocity," for example—they achieve a "little big band" effect that sounds much bigger than you might expect from only three horns. Golia is of course an asset as a soloist as well, taking notable solos on both horns. In addition to Halley's usual strong compositions—"Recipe for Improvisers" is an especially apt title, as his tunes always set out the ingredients for his improvisers to cook with as they see fit—there are three tracks that were created collectively. 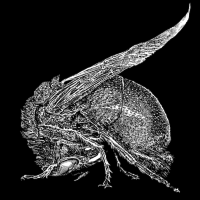 Australian pianist/composer Casey Golden leads his trio through an EP consisting entirely of a single piece in four parts, the band's first foray into extended composition. It's also an enhanced group sound: Golden plays synthesizer, Wurlitzer electric piano, and a music box in addition to acoustic piano, and special guest Daniel Walsh adds guitar to the mix, joined by bassist Bill Williams and drummer Ed Rodrigues. The piece has a minimalist, slowly unfolding atmosphere. There are solos, but it's mainly a collective sound. The tone is set by the actual mechanical music box which opens and closes the piece, a sound so delicate that the music seems to emerge from silence. Walsh's guitar colors three of the four parts significantly, even though he does not solo. It's a lovely performance, more involving than the title "Miniature" implies. 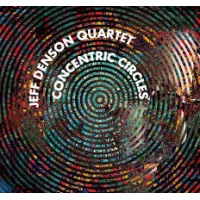 Bassist, composer and vocalist Jeff Denson leads an acoustic quartet through a program of intricate originals on Concentric Circles. These are complex compositions, with through-composed sections and written-out parts alternating with improvisation. "The pieces aren't lead sheet style compositions" as the composer describes them. Which doesn't mean they sound forbidding: on the contrary, they're full of attractive themes, energy, and swing. Denson contributes vocals on two different selections: "Wishing Well" is a song with lyrics, almost in contemporary singer/songwriter style; "Once The Door Opens" includes vocalise, and is in a chamber jazz style. Denson plays the sole cover, Duke Ellington's "I Got It Bad" on arco solo bass, with extensive use of harmonics, sounding as if he is accompanying himself. The group sound benefits from Paul Hanson's bassoon, an unusual solo voice which can blend with the bass in interesting ways. It is rounded out by pianist Dan Zemelman and drummer Alan Hall. 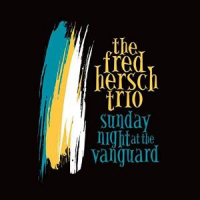 Pianist Fred Hersch returns once again to the storied stage of the Village Vanguard with his longtime trio with bassist John Hebert and drummer Eric McPherson. Hersch felt the group really got to a special place by Sunday night in their week-long run, so he made the unusual choice to present the first set in its entirety, with just two songs from the second set to round out the album. The set opens with "A Cockeyed Optimist," a rarely played Richard Rogers tune, and also includes an emotionally naked version of Lennon and McCartney's "For No One" (based on the arrangement Hersch made for the album Slow Hot Wind (Varèse Sarabande, 1994) with vocalist Janis Siegel). The trio revisits the Jimmy Rowles classic "The Peacocks" and Hersch's "Serpentine," while the usual Thelonious Monk slot is filled by "We See," another unexpected choice that Hersch has never recorded before. 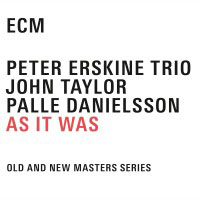 Peter Erskine Trio
As It Was
ECM Records
2016

Drummer Peter Erskine and his trio with pianist John Taylor and bassist Palle Danielsson made four albums for ECM: You Never Know (1993), Time Being (1994), As It Is (1996) and Juni (1999). The three met as members of trumpeter Kenny Wheeler's quintet and big band—which probably explains the presence of a couple of Wheeler tunes—and had been featured as a trio during the course of those performances, so the combination was not as unexpected as it may have seemed at the time. Taylor accounted for the lion's share of the compositions, but it was very much Erskine's concept. He was looking for a democratic, undemonstrative group sound: one that would "get audiences to lean forward in their seats to hear us" in his description, an approach that came out of the playing he had done with guitarist John Abercrombie and in a trio with saxophonist Jan Garbarek and bassist Miroslav Vitous. Together the trio immediately found a distinctive collective voice, one that remains unique today. Although I had followed all three of these players to varying degrees, I'll confess to having ignored these albums when they were initially released. So I am grateful for their reissue as part of ECM's Old And New Masters Series, and look forward to getting to know them better. 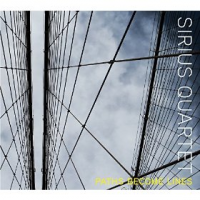 Sirius String Quartet is a string quartet with a difference, even if they have dropped the word "String" from their name. The group motto is "blending the precision of classical music and the energy of 'comprovisation,' " which gives a good idea of what their music sounds like. Violinists Fung Chern Hwei and Gregor Huebner (there is no First and Second Violin division) and violist Ronald Lawrence play standing up, a striking departure from staid Classical music convention—cellist Jeremy Harman's instrument dictates that he must play seated. This program was entirely composed by group members Harmon, Huebner and Hwei. Its genre mix of odd meters, dissonance, romantic harmonies, jazz, Afro-Cuban rhythms and abstract free improvisation gives the players ample opportunity to display both precision and reckless abandon. It's not unusual for there to be extreme shifts in a single piece. "Spidey Falls!" contains highly rhythmic playing, abstract glissandi, tutti chords, and a hot fiddle solo in its six-minute playing time. A group with its own voice, somewhere between the jazz focus of the Turtle Island Quartet and the New Music focus of the Kronos Quartet.