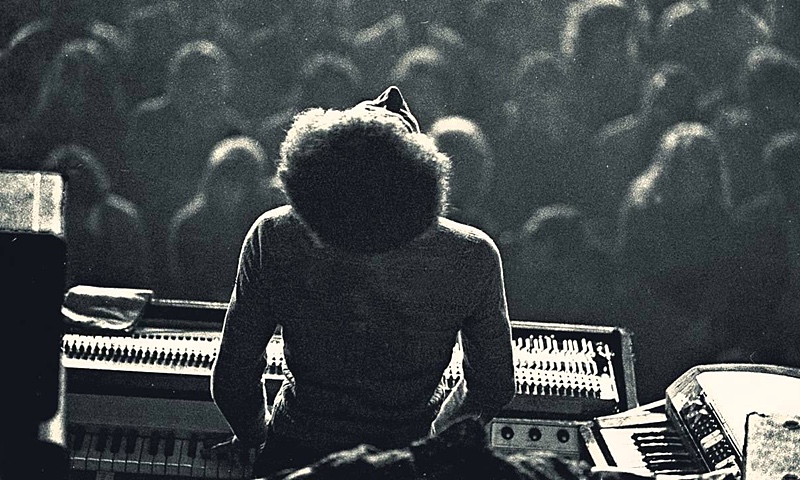 By Jeff Fitzgerald, Genius
May 8, 2015
Sign in to view read count

A recent AAJ poll reveals that if you were to ask the average American to name the most influential living jazz pianist, 89.4% of them would giggle like a schoolgirl because the word "pianist" sounds naughty when you say it out loud.

Keith Jarrett, considered by virtually the entire cast of The Sopranos (except for Jamie-Lynn "Meadow" Sigler) to be the most important living jazz pianist, was born on May 8, 1945, in Allentown, Pennsylvania. His mustache was born on July 12, 1971, in Altoona. Determined early on to be a musician, he (Keith, not the mustache) took up the piano at the age of three and was declared a prodigy by the sort of people who have time to dwell on that sort of thing. As for the rest of us, we have to go to work.

And so did Keith, rigorously devoting himself to the study of classical theory, which is the supposition that music composed by long-dead Europeans could still get women "in the mood." The theory was finally proved in 1979 with the movie 10 , showing that Ravel's "Bolero" could get the elfin Dudley Moore in with the still-hot Bo Derek. The theory held true two years later with Arthur , when Christopher Cross? appalling pop tune "Arthur's Theme (The Best That You Can Do)" netted Moore the increasingly creepy Liza Minnelli. By the age of 15, and the full-bore onset of adolescence, he was studying classical composition and had already mastered a wide variety of clothing fasteners common to early sixties fashion.

Planning on heading to France to study under Nadia "The Parisian Pedagogue" Boulanger, well-known (by who? I've never heard of her) piano instructor, Keith abruptly decided to go to Boston's Berklee School of Music and concentrate on jazz. A wise decision, in my opinion. Even in that more innocent time, it was still not a good idea to go traipsing halfway around the world to study under someone just because they have a fancy French-sounding name. He left Berklee after a year, following a dispute with cafeteria officials over their definition of Pigs in a Blanket.

Performing around Boston for a short time, mostly because traffic was so gridlocked he had no choice, he soon fell victim to the allure of the Big Apple. Once in New York, Keith joined Art Blakey and the Jazz Messengers just long enough to help them defeat the Modern Jazz Quartet in a 4-man bobsled race held at Lake Placid to decide which group got first dibs on Miles Davis' leftovers. He then joined the Charles Lloyd Quartet (after accidentally joining the Harold Lloyd Quartet and wondering why the rest of the guys were wearing straw boaters and round glasses). Here, he gained not only valuable experience, but international exposure (which was at that time still just a misdemeanor).

Leaving Lloyd in 1969 he soon formed his own group with the great bassist Charlie Haden and drummer Paul Motian (insert your own "My Favorite Motian" joke here). He later added saxophonist Dewey Redman, who had made his fortune in the chewing tobacco business before deciding to pursue his true love. And when she wasn't available, he turned to jazz.

Which is all well and good.

As a new decade dawned, and the specter of Seventies "fashion" hung in the air, Keith sat in for a while with Miles Davis while trying to stave off his inevitable Afro. This lead to a deal with Columbia, which produced the album Expectations. His contract with CBS was abruptly cancelled two weeks later, however, when rumors of his international exposure reached the label's scandal-wary execs. Undaunted, he found a home at the ECM label in Germany, where they seem to be more tolerant if Teutonic tourists stuffed into Speedos are anything to go by.

ECM?s Manfred Eicher persuaded Keith to record albums of solo piano, beginning with Facing You, because of the prevalent European perception that whenever Americans get together in groups they tend to open either a military base or a McDonald's. When the album was a hit, Keith followed it with a monolithic triple album that would establish him as a major voice in jazz but never seriously challenge Chief Wilson's single season record of 36 triples set in 1912.

While his solo success on the other side of the Atlantic would have been enough for most mustachioed jazz pianists from Pennsylvania, Keith found himself wanting to fully explore his creative voice within the group idiom. (Wow. My Jazz Writer's ClichéMeter just pegged.) Keith managed to finagle a deal that would allow him to record with his quartet on the Impulse! Label while continuing his solo work on ECM. This was accomplished by convincing the Germans that the Impulse! recordings were performed by his doppelganger, a ruse that was so successful that the doppelganger was eventually signed to ECM to record with a European quartet (Jan Garbarek, Jon Christensen, and Palle Danielsson) while Keith laughed all the way to the Deutsch Bank.

With all his considerable success in jazz, Keith never lost his love for classical composition and performance. He also never lost the hope that classical music might work the same magic for him that it did for the aforementioned Dudley Moore or later, Thomas Hulce in Amadeus. In fact, since the early seventies Keith has maintained two distinct, almost parallel careers (three, if you count the doppelganger) in both improvised and composed music. Not since Mozart, or at least Fred Waring (bandleader, composer, and inventor of the electric blender), has an artist been so versatile.

From his prodigious beginnings to his madcap European adventures, Keith arrived in the eighties a mature artist. He no longer needed an afternoon nap and rarely threatened to hold his breath till he turned blue if things did not go his way. He formed in 1983 what would be his primary group element from that point on, the Standards Trio, with Jack DeJohnette (repeat fancy mustard gag, from last month ) and Gary "NBC" Peacock.

Since the early eighties, Keith has performed exclusively with the Trio or solo in either classical or completely improvised jazz concerts. It is his improvised concerts that are perhaps the most interesting, just Keith and his piano with no predetermined structure. It is the immediacy of jazz taken to its logical extreme, the act of creation in real time with not so much as even a suggestion from the audience (he quit taking requests after hearing "Play some Skynyrd!" one too many times). Some likened the experience to watching Manolete pick a fight with a random bull on the street, which is just silly.

1984 saw Keith play no jazz at all, concentrating on his other passions of classical composition and performance, while devoting his free time to his mad quest to break the high score on Donkey Kong (he saw the concept of a giant ape throwing barrels at a determined working man as a metaphor for the music business). The withdrawal from jazz weighed heavily on Keith, as did the encumbrance of carrying around all those quarters. In 1985, he suffered a breakdown that left him in such a state that for several days, the only musical activity he could manage was to hum the theme to Hill Street Blues.

Emerging slowly from this incident, he found himself in a state of revelatory creative ecstasy. Recording on standard home cassette recorders, and playing all of the instruments himself, he turned out 30 improvised pieces. Twenty-six of these would be collected and released on the double album Secrets , while the other four were left by the door, mistaken for Kit Kat bars and given out as Halloween treats. Undaunted by the error, Keith would still divide his life Before Secrets (B.S.) and After Secrets (A.S.). Feel free to enjoy those abbreviations, kids, but remember to play nice or I'll have to separate you.

Moving into the Nineties with his four primary creative outlets—solo jazz, solo classical, the Standards Trio, and his brother Dale's number 88 stock car racing team ( I may be wrong about that last one, but NASCAR tie-in's are big money, so I'll thank you to keep it under your hat. Keith finally began to receive the respect he deserved, particularly from the classical world. For one thing, Van Cliburn no longer gave him a Melvin every time they met. He also received a Grammy nomination for his rendition of Bach's Well-Tempered Clavier Book I , and several awards both for recording Shostakovich?s 24 Preludes & Fugues op. 87 and for spelling Shostakovich correctly on the first go.

In 1994, Keith and the Standards Trio performed live at the Blue Note in New York and jumped on the box set bandwagon with a 6-CD collection of the entire three-night experience that was hailed by critics as "lengthy." Keith followed that with what is considered to be one of his finest solo performances at the famed La Scala Opera House, the first non- classical, non-monster truck event ever to grace the storied venue.

1996 saw Keith and the Trio performed in Tokyo what is widely considered to be one of their greatest shows, intermingling timeless jazz standards with the ancient traditions of Kabuki theater. A later attempt in Osaka to combine jazz and Sumo fell flat because Keith weighs maybe a buck fifty soaking wet.

In the late nineties, Keith was diagnosed with what came to be known as Chronic Fatigue Immune Deficiency Syndrome (which used to be called just plain "sick and tired"), which left him unable to meet the rigorous demands of live performance. He now spends a great deal of his time raising awareness for a variety of mustache-related causes, as well as lobbying the medical community to come up with a cooler name for his disease. And even though his illness has kept him from his deserved place at jazz's current forefront, I'll still lay you 3:1 he could take Brad Mehldau in a fair fight.

Ultimately, Keith's place in jazz is vouchsafed not only by his ECM recordings and his Trio discography, but by his impact across the span of jazz piano and its inextricable kinship with the European tradition (there goes the ClichéMeter again). Perhaps only Wynton Marsalis has had an equivalent effect on both jazz and classical, but he's already had his turn here so forget I mentioned him.