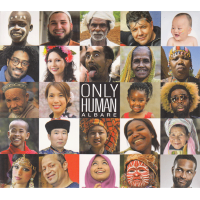 Australian guitarist Albare (Albert Dadon) celebrates ethnic diversity and cultural threads common to all people with the effervescent Only Human. Together with pianist Phil Turcio they have penned a set of ten catchy, impressionistic tunes that the band interprets with tastefully understated performances.

The breezy music coalesces around a few clean and elementary motifs without an intricate structure as each track evokes a specific mellow mood. The lilting and languid "Hotel Royal" for instance conjures up images of an island resort as the leader's resonant strings float over the loose and ambient rhythms. Turcio lets loose a smooth cascade of over the electrically enhanced backdrop.

Throughout this elegant album the emphasis is mostly on sleek harmonies with little in the way individual flights of fancy. The greatest spontaneity comes from pianist Axel Tosca Laugart who replaces Turcio at the keys for the majority of the record. On the soulful "Lonely Planet" for instance the swaggering group vamps create a retro-urban atmosphere with Tosca Laugart's smoky dynamic keys adding a jazzy sensibility.

Elsewhere on the romantic and mellifluous "The Tale," Tosca Laugart's subtle lyricism and Albare's bluesy embellishments save the song from excessive sentimentality as its melodic backbone gets a tad too syrupy. Meanwhile the guitarist brings pizzazz with his rapid, blue-hued strums to the bustling "Roundtrip" as the pianist adds a nightclub feel to it with his thick chords.

Albare has created a cohesive and enjoyable work with an upbeat, sundrenched aura. What Only Human lacks in improvisational rigor and compositional complexity it makes up for in alluring grace and charming musicianship. The result is a pleasant disc that makes for an entertaining albeit not terribly stimulating listening experience.