Born in Camaguey, Cuba, bassist, violinist, and composer Yunior Terry is part of one of Cuba's most gifted musical families. Following his father and two older brothers Yosvany and Yoel, he began his musical training at the age of seven. He grew up surrounded by the music of Afro-Cuban religious traditions and learned to play the chekeré from his father Don Pancho, the undisputed master of the instrument. Yunior graduated from the prestigious National School of Art (ENA) with a double major in bass and violin. While in Cuba, he played violin with the Cuban National Symphony and bass with folkloric and Latin jazz groups.

Yunior moved to the United States to continue his musical studies at CalArts in Los Angeles, graduating in 2002 with honors. Since then, he has worked with some of the biggest names in Latin American music, including Jerry Gonzales and Fort Apache, Steve Coleman and Five Elements, Quetzal, Arturo O'Farril, Pete Escovedo and Sheila E., Dafnis Prieto Quintet, Jane Bunnett, and the Latin Jazz All Stars. 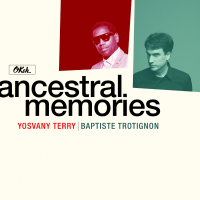 All About Jazz musician pages are maintained by musicians, publicists and trusted members like you. Interested? Tell us why you would like to improve the Yunior Terry musician page.