Born into a family of professional musicians, Phil commenced playing the piano at a very early age.

He has worked with both local and international artists as a pianist, composer and producer and has penned hits for Australian Idols and icons alike.

From composing music for the Sydney Olympics in 2000, and the World Youth Day 2008, to television themes and playing with international artists, Phil's flexibility as a musician keeps him in constant demand.

He recently toured with Larry Carlton and his group on his latest Australian tour.

Over the years, Phil has worked on many Australian television shows including Hey Hey it's Saturday, Australia's Got Talent, Carols by Candlelight, and In Melbourne Tonight to name a few.

Phil and his band 'Hemispheres' were nominated for a Grammy in 2008, for 'Best New Contemporary Jazz Group.'

His recording studio in Melbourne now sets the scene for Phil to develop upcoming artists, record, program, compose, and produce.

He is unquestionably one of Australia’s finest all around musicians 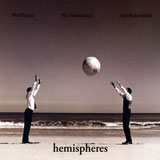 All About Jazz musician pages are maintained by musicians, publicists and trusted members like you. Interested? Tell us why you would like to improve the Phil Turcio musician page.