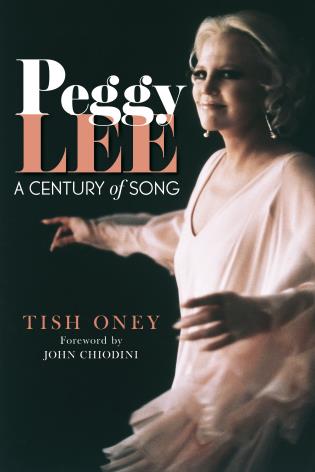 A Century of Song marks the centenary of Peggy Lee's birth, but coming eighteen years after her death, the title is a reminder of the enduring legacy of one of the twentieth century's greatest singers. Few are as qualified as Tish Oney to evaluate Lee's music and career. An internationally renowned jazz singer, pianist and pedagogue, her doctoral dissertation at University of Southern California Thornton School of Music focused on Lee's original songs—a surprisingly hefty two hundred and fifty of them. Oney's doctoral lecture/recital show, The Lyrical Genius of Peggy Lee, has since toured worldwide. What is more, Oney has transformed one of Lee's poems into an original song, and has toured and recorded with John Chiodini, Lee's late-career guitarist and musical director. Oney, therefore, is perhaps uniquely well positioned to analyze one of the most distinctive voices in the history of popular music.

From the outset, Oney nails her intention to focus exclusively on Lee's music and career high to her mast, paying scant regard to the details of Lee's turbulent private life. Though first husband and musical collaborator Dave Barbour is a recurring figure in Lee's narrative, her three subsequent marriages warrant only a short paragraph, which is perhaps as it should be in a book that unapologetically celebrates the music of a multi-talented artist on the one hand, and dissects the anatomy of her craft on the other.

Born in May 1920, Norma Delores Egstrom grew up on the family farm in Jamestown, North Dakota. Her mother died aged thirty-nine, when Norma was just four, and she was brought up in the shadow of an alcoholic father and an abusive stepmother. Little wonder then, that Oney describes the teenage Norma as "restless," or that her special voice would bring her singing gigs further and further from home. Talent contests eventually brought her onto the radio while still a teenager. For this live radio broadcast, Ken Kennedy, the musical director at WDAY, Fargo, gave Norma the name Peggy Lee. A little later, on a hotel gig in Chicago, Peggy Lee was spotted by Benny Goodman, who immediately saw Lee as the perfect replacement for Helen Forrest, who had left Goodman's band shortly before.

Just like that, Lee found herself at the front of one of the most popular swing bands of the day, led by one music's hardest taskmasters. In one particularly demanding year, Goodman hauled his band through fifty consecutive one-nighters in different cities. Of Lee's earliest recordings with Goodman, in 1941 for the Okeh label, the author notes her: "uncanny pitch precision, easygoing rhythmic sense, and relaxed delivery the artist would become known for throughout her life."

Lee enjoyed great commercial success with Goodman, "one of the first American pop culture stars," particularly with his arrangement of "Why Don't You Do Right?," which stayed on the pop charts for almost five months in 1943. The summer prior, guitarist Dave Barbour had joined Goodman's band. Barbour and Lee soon became an item, in contravention of Goodman's strict rules concerning romance between band members, and soon after the couple left to form their own successful musical partnership.

Oney only pays attention to the details of Lee's personal life as they related to and affected her music. Readers looking for a more rounded biographical picture might glean more from James Gavin's unblinking portrait Is That All There Is? The Strange Life of Peggy Lee (Atria Books, 2014), or Lee's own Miss Peggy Lee: An Autobiography (Bloomsbury Publishing, 2002)—both of which the author draws from, primarily to quote Lee herself, or to provide context to her own musical observations. Oney also frequently references Iván Santiago Mercado's exhaustive Lee discography/videography. The nuts and bolts of this book, however, involve Oney's insights into Lee's approach to singing.

Song by song, album by album and milestone by milestone, Oney traces Lee's musical development from her early years with Benny Goodman and her unbroken chain of success in the 1940s and 1950s with Capitol, to the '80s and '90s, when her artistic merit was not always reflected in record sales. Oney's suggestion that Lee deserves consideration as one the all-time great blues singers may be contentious, but her equally bold claim that Lee "permanently changed the landscape of American popular music as well as the role and society's expectations of the female pop singer" certainly stands up to scrutiny.

Singer-songwriter, lyricist, Academy Award-nominated actress, voiceover artist, radio show host, poet and activist, Lee's fifty-year career was more varied than almost any of her contemporaries, as the author reiterates time and again. And Lee, ever the perfectionist, pursued all these avenues largely on her terms. In the male dominated music industry where producers typically chose which songs appeared on an album, Lee worked unceasingly to exert her artistic autonomy.

At the same time, Lee was unafraid to flaunt her femininity, prompting producer Dave Dexter Jr.'s backhanded compliment that Lee ..."could sing like a little girl in a church choir or a husky-voiced, tired old whore." Indeed, it was her attraction to sexually provocative songs, the author relates, that brought Lee into conflict with Capitol and forced her move to Decca.

It is impossible to come away from this book, especially if revisiting Lee's music en route, without a heightened sense of the nuance, skill and control in Lee's delivery, whether singing the blues, swinging like no-one, interpreting a soft ballad or visiting contemporary popular fare. Oney's relentless attention to the technicalities in Lee's singing—the smears and slides, the perfect pitch, her rich tone and emotional gravitas, the soft, breathy delivery that was her calling card, and her improvisational ability to transform a song's melody and rhythm, build a persuasive picture of a singular talent.

Early in Lee's career she faced accusations of being a Billie Holiday copy, an undoubted influence, but as the years rolled by, and as Lee diversified the type of songs she sang, this comparison ceased to echo so strongly.

These pages reveal much more than the technicalities behind Lee's vocal chops. The author depicts Lee as a pioneer in creating music videos and certainly Lee was no slouch in front of the camera, receiving an Academy Award nomination for Best Supporting Actress in Pete Kelly's Blues (1955). Nor was she a fool. The author hails Lee as: "one of the first musical artists to aggressively pursue intellectual property rights and royalty collection for film composers." In 1988 Lee sued Disney, eventually winning $2.3 million in 1991.

The breadth of Lee's music and the long list of high-profile collaborations are impressive. She recorded with Nelson Riddle's orchestra while Frank Sinatra conducted, sang duets with Bing Crosby, recorded with George Shearing and Paul McCartney, and wrote lyrics for Duke Ellington. She worked closely with Quincy Jones and Randy Newman, the latter who arranged the iconic "Is That All There Is?," Lee's only Grammy win from fourteen nominations. She formed a successful partnership with songwriters/producers Jerry Leiber and Mike Stoller, while her own songs were recorded by Sinatra, Dean Martin, Sarah Vaughan, Doris Day, Tommy Dorsey, Billy Eckstine and Nat King Cole, amongst others.

Lee's radio shows in Los Angles and New York also broke new ground—highlighting the work of up-and-coming songwriters, whom Lee never missed an opportunity to champion. The fact that Lee recited the poetry of T.S. Elliot, Rudyard Kipling, Samuel Taylor Coleridge and Robert Browning, also set her radio shows in a category of their own.

There were million-selling singles and critically acclaimed albums, notably Black Coffee (Decca, 1956), which the author describes as one of the very first concept albums ever produced: "It was to jazz what verismo was to opera -dream-burning realism," the author relates, noting the "hypnotism" of Lee's vibrato phrasing. [Incidentally, Black Coffee is one of Joni Mitchell's favorite albums -ed]. And ever willing to experiment, Sea Shells (Decca, 1958), which featured Stella Castellucci on harp and Gene DiNovi on harpsichord, saw Lee put music to 7th-9th century Chinese poetry, and embrace traditional Irish and English folk songs, sea chants and children's songs.

Although an avid Lee fan, Oney does not shy away from noting when Lee's performances, songs or albums fell below her usual high standards, a critical balance that lends her writing greater authority. There was the disastrous Broadway show Peg: A Musical Autobiography in 1983, which closed after just a few shows. Long before that, at the end of the 1960s, Lee's decades-long smoking habit had taken its toll on her voice, to the extent that the singer: ..."began to have difficulty sustaining energy and pitch all the way through a phrase."

Pneumonia exacerbated the problem and Lee was obliged to bring oxygen tanks to her recording sessions and shows. Despite facial paralysis and hearing issues, Lee remained in demand on the world's major stages until near the end. In her later years, when declining health made it challenging for her to perform, Lee soldiered on in a wheelchair. Yet still, Lee's qualities as a singer endured. She might not have had the lungs of her youth, but, Oney states, Lee retained her "delightful tonal variations" and "her subtle phrasing and expressive lyric interpretations" to the end. Lee's last major gig was at the Hollywood Bowl in 1995. She died of a heart attack in 2002.

Whilst Oney's account of Lee's career might lack some of the color of other books on Peggy Lee, it does more than most to explain the skill in her singing, the breadth of her musical language, and her allure. Significantly, the author makes a persuasive case for Lee as a highly accomplished songwriter, and not just an interpreter of others' songs. Above all, Lee comes across as a consummate professional of exacting standards, and one who stood her ground artistically throughout her career.

Peggy Lee: A Century Of Song will doubtless delight Lee's legions of fans, but its insights into Lee's stagecraft should be of particular interest to any aspiring singers who are sincere about the art of song, regardless of genre.