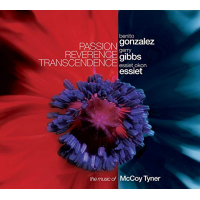 In the grand, giving spirit of the master, pianist Benito Gonzalez, drummer Gerry Gibbs and bassist Essiet Okon Essiet hold absolutely nothing back and pull no punches on their exhilarating tribute to McCoy Tyner, Passion Reverence Transcendence.

With each tune taped in a single take, the trio explodes with a bold and proclamatory rush. "Fly with the Wind" (originally written by Tyner for trio and strings in 1976) sets the bar high and never looks back. It's a feverish give and take as Gonzalez aggressively reveals the melodic nuances with punchy, crackling clarity, leading Gibbs and Essiet who are, without any exaggeration, literally a locomotive steaming down the tracks, from one sonic leap to the next.

And we're barely twenty five minutes into the music. Can they keep this pace up?

They can. And will after they take a breather. "Blues On the Corner" is a loose and loping blues which Gonzalez approaches with a Thelonious Monk-like, mischievous glee. Essiet again delivers a fascinating solo on the richly layered, energetic "The Greeting." Gonzalez then pares down 1974's expansive gem "Atlantis" from it's original eighteen minutes to just over a third of the time, but reveals as much of Tyner's intuition for harmonic construction and invention in that time as possible. Another blow-out.

Before concluding the outing with three Tyner-inspired compositions of their own, the trio treats "You Taught My Heart to Sing," a lyrical ballad from the mid 80's, with rolling elegance. The pianist then takes a stunning solo turn on John Coltrane's everlasting "Naima," which Tyner has rendered sublimely uncountable times. You need only ears to experience the beauty.

Essiet's Weather Report styled "Tyner Train Express" highlights Gibbs' synthesizer and a pumping baseline. Gibbs' mid-tempo "Between Friends" and Gonzalez's explosive, improvisational set ending "Brazilian Girls" are more in the McCoy Tyner vein, but that hardly matters. The three have done themselves and Tyner more than justice on Passion Reverence Transcendence. They've returned Tyner to the fore and blasted themselves into that rare territory of contemporary jazz masters themselves.

Fly with the Wind; Just Feelin’; Rotunda; Festival in Bahia; Blues on the Corner; The Greeting You Taught My Heart to Sing; Atlantis; Inner Glimpse; Naima; Tyner Train Express; Between Friends Brazilian Girls.