Home » Jazz Articles » The Other Night at Quinn's

The Other Night at Quinn's 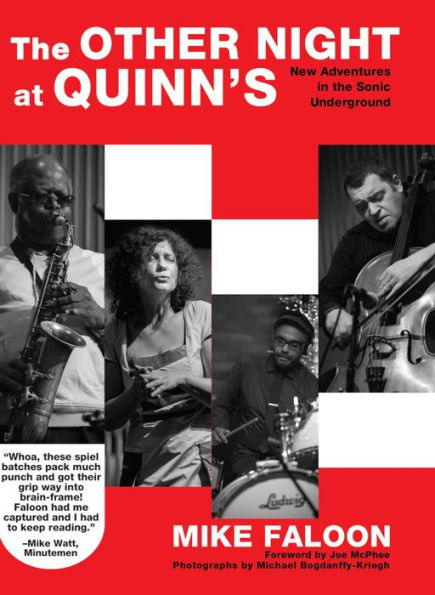 In addition to absorbing the sounds on recordings and live performances, the traditional route to an appreciation of jazz and improvised music usually entails seeking out the perspectives and opinions of experts. When diving into the music's deep end as novice listeners we're guided by an abundance of books, magazines, liner notes, websites and blogs that offer views of what is essential, what isn't, and everything in between. We study historical texts in order to get a handle on the music's stylistic evolution, and peruse the biographies of significant figures, seeking a greater understanding of what made them tick. As the years go by and we shape our own convictions, the views of critics, scholars and pundits aren't nearly as important, yet we often continue to read them anyway. If nothing else they serve as a source of new information and oftentimes provide a basis of comparison to our hard-won opinions.

One of the refreshing things about The Other Night at Quinn's is Mike Faloon's disregard for particulars and perspectives gleaned from the literature on jazz. Faloon forges brilliant, meaningful, and individualistic viewpoints about jazz and improvised music—mostly of the avant-garde and experimental variety—after his accidental discovery of Quinn's, a former diner, now bar/restaurant and live music venue located in Beacon, NY. He treats every live performance as a discrete entity, stays open to a variety of challenging, unfamiliar sounds and concepts, plays close attention to the details, and draws on his own resources and life experiences in grappling with the music and the scene at Quinn's.

Like most people, Faloon juggles several identities. He's a middle-aged man, son, husband, father, homeowner, public school teacher and man of letters, all of which figure into his narrative. A variety of interests, including movies, comics, baseball and books are also present in virtually every chapter. When Faloon happened upon the performances at Quinn's "my default preferences [in music] were still set to underground pop and punk, melody and brevity, and songwriting above all else. Lengthy improvisations rarely, if ever, entered the equation." (p. ix) Lacking any prior exposure to the artists' recordings or print media accounts of their work, his initial reaction to the abundance of unfamiliar sounds is one of bewilderment and disorientation. Instead of giving up he returns time and time again, taking notes and posting columns online as a means of orienting himself. (p. ix) Not being able to anticipate the sound of each concert becomes a large part of the attraction of Quinn's.

The chapters about the gigs at Quinn's are brief—between four to seven pages in length. Faloon usually offers a single paragraph, and then employs three asterisks as a means of separating it from the next one. Forging connections between the paragraphs requires a fair amount of interpretative work on the part of the reader. The same can be said about the things Faloon doesn't do. He doesn't preach or over-explain things, doesn't traffic in music theory terminology, and doesn't land on conclusions too quickly, too often, or too hard. For the most part, straightforward portraits of the careers and lives of the musicians and conventional reviews of the performances aren't part of his methods. He prefers to find meaning in uncertainty, getting lost, and losing his bearings—all of which are essential parts of Faloon's experience at Quinn's. "I can see each member of the band but it takes a moment to determine the point of origin, figure out who's making what," he writes of a band called Man Forever. "Eventually I change tactics, taking in the whole rather than untangle the parts." (p. 154)

Faloon is subjective and circuitous, his curiosity and ingenuity knows no bounds, and his commitment is unwavering. Although the words don't always come easily, he never stops seeking the right ones to describe a performance. "I don't have a steady response" to vocalist and violinist Iva Bittova. "I'm still thinking about the performance, searching for the right words, wishing I shared more of...[a friend's]...certainty and excitement." (p. 175) Although there are instances in which his "inner cynic squirms" (p. 190), Faloon works hard at listening without preconceptions or prejudice. He utilizes each night at Quinn's to mess with, extend, and alter his own perspective. In a chapter about guitarist Ben Monder he tries to "make sense of something so far beyond our reach, humanize it. All the while marveling more than minimizing" (p. 252)

Despite the weight of his preoccupations and concerns, The Other Night at Quinn's doesn't solely exist as a means for Faloon to come to terms with the music. Eight of the book's thirty-eight chapters are devoted to the voices of musicians, patrons, staff, and presenters who surrounded him on a nightly basis. All of them, ranging from local residents who offer accounts of the ups and downs of Beacon in the late twentieth-century, to performers Joe McPhee, Mary Halvorson, and Andrew Drury, to James Keepnews, the series curator, are given the freedom to speak their minds instead of being subjected to a standard, inhibiting list of questions. Their voices are not an extension of Faloon's. After reading their accounts it's easy to come to the realization that it truly takes a village to make a live music venue like Quinn's function in a meaningful way.

An essential aspect of Faloon's account of the scene at Quinn's is an awareness of how different segments of the audience react to the music. Quinn's may be a place where non-aficionados come to hear avant-garde sounds, but a positive—or, even a civil—response is not always the norm. On the one hand, Faloon observes Keepnews "doubling over in joy and disbelief as the music unfolds" (p. 103), and captures the vibe of the room when most people are fully engaged and listening intently. (p. 171) On the other, there's no shortage of people who are capable of drowning out the band. "For some...[Joe McPhee]...has crossed the line between risk and reward...A couple of conversations break out, rise above the music. The table behind me has been talking in hushed tones. Now they're too loud, disruptive, emboldened—things got weird, we've given ourselves license to blather". (p. 23)

The author consistently displays an impressive talent for describing the sounds and the methods of the artists at Quinn's. Even though the musicians efforts are often experimental in nature, Faloon contends that anyone willing to let go of preconceived notions of what music is supposed to sound like can discover something interesting and rewarding. Joe McPhee's saxophone makes sounds that are "high, loud and piercing, pitches that we're programmed to flee from in other settings. Sounds that signal to many, Get out of the way! Sounds that beckon the fortunate to climb aboard, to treasure the ride." (p. 136) Drummer "Andrew Drury picks up a small metal object, part of a sink faucet he found on a construction job. He leans over his floor tom, places the faucet on the drumhead and exhales. He works with care and precision, a jeweler placing loupe to gem, magnifying what lies within, revealing mournful, voluminous sounds. A solo sans sticks." (p. 241)

One of the things that separates Faloon from most music writers is a willingness to use his "real life" to illuminate the music. The parallels and analogies aren't exact, but he consistently draws meaningful connections and continuities. Drummer Ches Smith is not unlike the crew chief that takes down a tree in Faloon's back yard. Both are perfectly willing to cut into and tear apart the structures they're leaning on. (p. 110) The commonality between the band Iron Dog and a childhood memory from a swimming pool is the generation of a whirlpool-like momentum when individuals converge and move in the same direction. (p. 199) Faloon regards drummer Chris Corsano's efforts to deal with a broken snare stand as a "microcosm" of his mother's struggles with a chronic illness. "When the parts won't work like he wants them to, he puts others first and plays on." (p. 140)

Anyone who has exerted a certain amount of effort into trying to comprehend music that isn't "linear, sequential, everything accounted for, no mess and easy to digest," (p. 261) will recognize at least something of themselves in The Other Night at Quinn's. Faloon's work contains a tacit kinship to those who regard music as an essential part of their lives, and welcome the challenges presented by unfamiliar sounds and methods. It's interesting to consider how many others like Faloon are out there, fans with unique perspectives, products of their own curiosity and ingenuity, that go well beyond platitudes, empty praise, and simplistic criticisms.