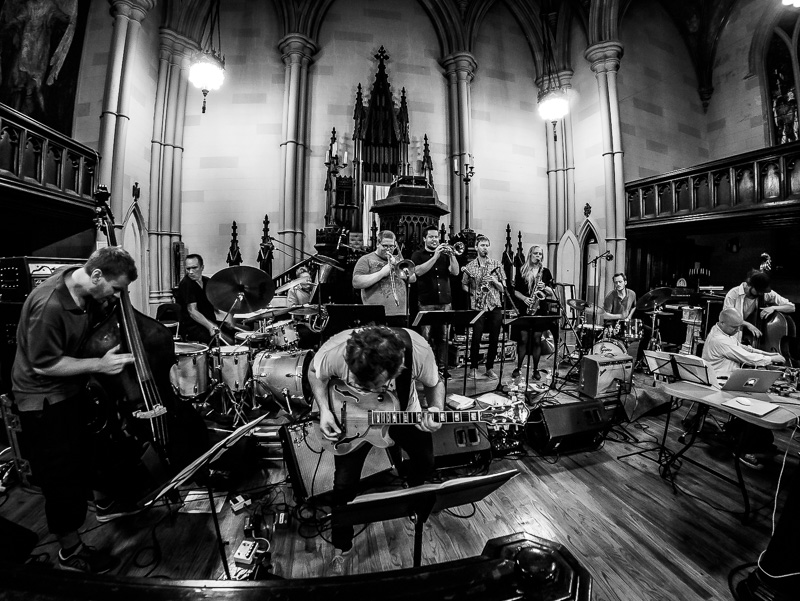 There aren't many churches where a believer can purchase Large Unit underpants upon entrance. Brooklyn's Issue Project Room experimental music venue is currently undergoing even further renovations, so they've been promoting gigs at various temporary haunts around the city. A reverberant Brooklyn Heights space such as this one might be viewed as an uncertain proposition when housing a fully engorged band such as this, with twinned drums and bass, plus a lusty dose of maximised guitar and electronics. This could have been a disastrous choice, and perhaps it was, given that discussion with a few folks post-performance revealed that the sound quality was not particularly robust, detailed or delineated when heard from the rear pews. Your faithful scribe lounged on the very front row, just to the side of the full right speaker emission, probably picking up a good deal of localised onstage sound. Here, all was perfection, with instruments clearly separated, ramming out when required, and roundly resonant during the calmer sections of Norwegian drummer Paal Nilssen-Love's music.

This was the first date in a compressed two-week North American tour, and the Unit appeared visibly geared up for intensive action. The compositions tended to be reasonably extended, tightly constructed with repetitive riffing sections, divided sometimes into satellite combos, and always allowing ample room for expressive individual improvisations. It was clear from facial expressions that the players were frequently surprising themselves, delighting in unpredictable sonic results, unfamiliar chance patterns or sheer blown-out chops, members shocking with a fresh way of expressing the score's blending of symbols, written instruction and conventional notation.

The single set was a rich delicacy, running over not much more than an hour. Content was crammed, every second offering up power, dynamism, momentum and rupture. Some of the most gripping sections occurred when the ensemble chopped itself smaller, as with a guitar/bass/drum capsule outburst that was answered by another trio of electronics/bass/drums. The traditional church organist was replaced by the church electronicist, as Finland's Tommi Keranen sat serenely at his table of effects boxes, only the sudden rapid twist or tweak of a knob revealing the immense power at his fingertips, great ripping and rending grotesqueries that complemented and sometimes disrupted the overall 'jazz' construction.

A stippling, percussively played section made a processional progress, and then a dubby two-bass trundle broke out from Jon Rune Stṛom and Christian Meaas Svendsen, very reminiscent of early PiL, from the era of their Metal Box album. Klaus Holm emitted a baritone saxophone squeal-solo, as Nilssen-Love and Andreas Wildhagen set up a doubled drum tattoo. Extreme guitar feedback closed, with Ketil Gutvik being very fond of drawing out hums, tones and rings, extending them into the church ether.

A close observation of Keranen's tabletop array was instructional, as he waggled a small plastic contact microphone around a tiny speaker cone, vibrating deep into its tiny feedback world. Another skeletal threesome set-up emerged from the full-on strafe, this time a very sparse stretch, courtesy of alto saxophone, bass and drums. The Unit's horn section were frequently given the straight-ahead task of being a riff machine, as opposed to proffering a significant number of solo spotlights. Much of the highwire excitement was provided by the other teams, the drums, bass, guitar, tuba and electronics. As the set chased its climax, Pere Ake Holmlander trotted out a monster bass line, providing a bovine spine as the horns slow-locked above, Mats Aleklint's trombone solo ascending on its blustering flight path. Keranen's Sherman Filterbank solo ripped askew, as if he was rejoicing in the mutilation of that weighty slab of meat from his homeland (so the "Culius" composition was titled).

Why would a regular New Yorker want to see another pianist interpret the works of Philip Glass, when the master minimalist himself can be found in concert so regularly in his home town? Because Bruce Brubaker specialises in a selection of arrangements where the mostly ensemble-scale Glass pieces are translated into a solo piano existence, retaining the melodic heart, but lending them a new intimacy. It's as if these more grandiose compositions are allowed to exist on the plane of Glass's piano études. Another reason would be the specific situation of this Poisson gig, which illustrated the club's quieter, early evening aspects. Lighting was very low, with tables candlelit, and the full audience almost completely stilled for intent listening. Sometimes a chair might softly scrape, a muncher might crunch or a cocktailer would slurp.

Okay, so the opening piece on Glassworks was for solo piano on the original album, but Brubaker included compactions of the final stretch of the Satyagraha opera, and sections from the Thin Blue Line movie. He imposed a sense of deep authority on the proceedings, perhaps overly serious in his maestro stance, but ultimately this was a fertile choice, probably forcing the gathering into such steeled concentration. The flow was such that single lines flourished in tandem with billowing chordal progressions, suggesting the larger works to a mind's eye which was already perhaps filling its own details from the reservoir of recorded memory. Such is the power of a greatest hits set-list, although these were, in fact, less predictable selections from the Glass oeuvre.

The Glasshouse Orchestra/Muzsikás
Skirball Center For The Performing Arts
June 17, 2015

This inspired double-bill was part of Kulturfest 2015, the first edition of a new, dedicated exploration of Jewish music, in all its various guises. Both bands approached the folkloric sounds of Hungary, one from a New York perspective, the other directly from the source. The Glashouse Orchestra opened the evening, a new-ish outfit led by The Klezmatics trumpeter Frank London, and featuring a line-up of two violins, reeds, cimbalom (Hungarian hammered dulcimer), electric guitar, upright bass and drums. Their sound was well-honed and extremely precise, but still held the qualities of spontaneous enthusiasm, tightrope walking with a complete confidence. The Hungarian violinist Edina Szirtes Mókus also possessed a striking voice, singing lead on several tunes, imbued with a hollering resonance, her countrynman Miklós Lukacs skittering with delicate agility across his cimbalom strings. As one number concluded, ringing with a hardcore folk grit-fall, the next song would typically jump forward in time, as guitarist (and old Lou Reed sideman) Aram Bajakian twanged out a surf-descended riff-figure, bassman Pablo Aslan also entering the field from a completely alien Buenos Aires direction. This was an excellent example of vintage material being infiltrated by a modern attitude, retaining integrity whilst still energised by current overload practices.

Muzsikás are Hungary's most renowned interpreters of old folk sounds, crucial to the revival of this songbook way back in 1973. Their interests are similar to London's, but this is a purist approach, a compact quartet with a guest vocalist, Agnes Herczcu, the fiddles and bass possessing a grainy roughness that makes the tunes sound completely authentic. Despite their status on the scene, it would have been wiser to have Muzsikás play first, as their music has more subtlety, and less variation. Following the careening eclecticism of Glasshouse, these old traditionalists suffered due to their more introverted nature. Nevertheless, there were still frequent shifts in instrumentation and line-ups for each tune, as Herczcu came and went, some songs stripped of drumming, and particularly when they brought out the gordons, earthy incarnations of the cello, their thick strings struck with sticks for added percussive attack. For the final stretch, the Glasshouse crew re-emerged and the two bands grafted together to form an entity that magnified the expression of the preceding qualities, producing a suitably rousing climax to a vortex-tour of Hungarian Jewish classics.