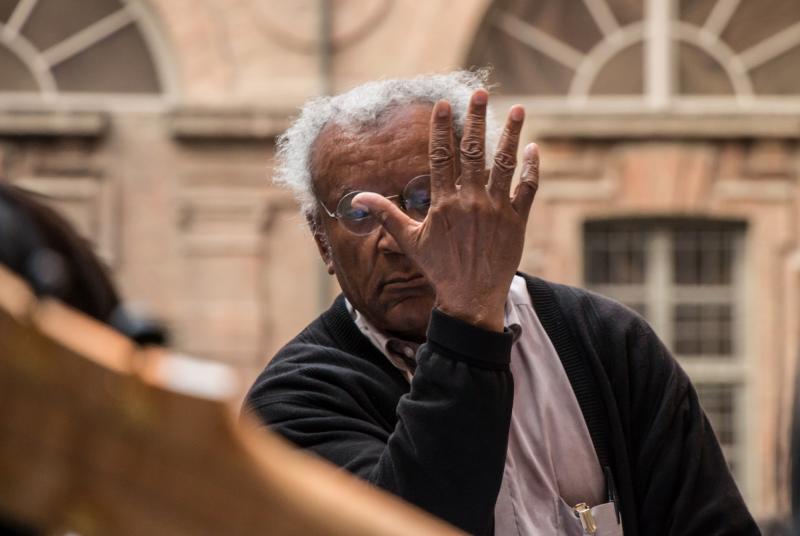 By Francesco Martinelli
June 25, 2015
Sign in to view read count

The Sonic Genome offers a new paradigma, an utopian blueprint for music and society.

Someone might ask: "Why is an African-American saxophonist from Chicago performing inside the Egyptian Museum in Turin? Where is the connection between "da jazz" and Ancient Egypt?" Sorry, but it isn't a legitimate question. If you still don't make the connection, take the Sun Ra 101 course including mandatory listening of recordings by Earth, Wind & Fire...

Torino's Jazz Festival (arguably one of the best of its kind in Italy) for its Fourth edition in 2015 invited Anthony Braxton to perform his latest opus—the Sonic Genome—inside the renovated Egyptian Museum in Turin. The holdings of this Museum are among the most important in the world for Egyptian Archeology, and the permanent exhibition has recently been reorganized in a stunning display.

Turin—let's note this in passing—it's the only Italian city where you breath the best of European air. Not the Europe of bankers and business but the Europe of shared culture, of well-organized community life. Milan lost its chance ages ago, probably due to the domination of Berlusconi and his similes. Florence and Venice are tourist traps; I dearly love Naples and Palermo, but their cultural and community lives are not on a par with their histories and traditions. In Turin you have the modernity of the Cinema Museum and the antiquities of the Egyptian, the best organized traffic in Italy, an unparalleled offer of traditional food, and many other pluses, including the new jazz festival, whose 2015 program included the European Premiere of Braxton's Magnum Opus.

The Sonic Genome is maybe the most thrillingly ambitious experiments by Anthony Braxton: its goal is the creation of an interactive musical environment. For eight continuous hours, fifty-plus performers use the compositions and improvisational languages developed by Braxton through his forty years of artistic investigation to create a living sound world. The Ghost Trance Music serves as the connecting principle for the musical structure. Ensembles form and split apart like cells dividing and reforming into new organisms; likewise, the members of the audience (or "friendly experiencers," as Braxton would call them) are invited to be active participants, choosing who and what to listen to as they move about the space. Described as "less a compositional strategy, and more a utopian model for an ideal democracy," Anthony Braxton's music finds its definitive expression in the Sonic Genome. The entire body of around sixty musicians was divided into 12 ensembles, named after the characters in Braxton's "Trillium" opera, 12 like the language types that the composer long ago identified as building blocks of his music. Each performer can pull from throughout Braxton's rich oeuvre, from solo and duet music to operas and compositions for creative orchestra. Musicians can improvise in reaction to the sounds around them, choose to remain silent and simply listen, or walk out, but the activity in the space continues unabated. Braxton was assisted by choreographer Rachel Bersen, and by his ex-sudents, now major musicians in their own right,Taylor Ho Bynum and James Fei, conducting and coordinating.

Describing in detail what happened is beyond any single reviewer, and rightly so. In all his career Braxton had the aim of not being easily manipulated/handled, and the Sonic Genome is a culmination of his work under this respect as well. The duration itself made impossible to keep focused all the time, so all participants took time away, walking in the silent hall of the Museum—the music was not allowed in all halls due to preservation issues—and then were called again from the distant, echoing sounds.

A few images: the initial, rumbling vibration created in the top balcony of the museum slowly evolving in a series of microscopic variations, not an initial big bang but rather a supporting drone; the different strategies for attacking the space elaborated by the different teams—using corners and staircases or deploying around statues and cases; the determination of Kyoko Kitamura and her band of singers, joyful, dancing voices hovering between Ligeti and Hildegard von Bingen in guerrilla operations between the lines; the lyrical bent of Sara Schoenbeck bassoon leading a chamber music ensemble on the stairs; Mary Halvorson's squad producing small sounds in a minuscule cave temple; Andrew Raffo Dewar 's band including leading Italian improvisors like Filippo Monico and Pasquale Innarella quoting songs and marches; Alexander Hawkins' enthusiastic conduction... but all these beautiful details hardly match the totality of the experience.

As a child going to classical music concerts with my parents and later with friends I always felt elated in that magic moment before the official beginning where the swelling sound of the tuning orchestra was so full of promises (not always fulfilled by the actual program played). Anthony Braxton's Sonic Genome realizes the potential of the improvising orchestra, keeping that initial wave of excitement and transforming it into a surging tide.

But at the same time it captures the joyous spirit of the marching band: everybody smiles when a band goes by, no matter how good or corny it is. The surprise of music in an unexpected place, free to come and go, echoing from a distance, unfettered by the social conventions of the concert hall or the the jazz club. Around a band playing for people in the open a community instantly grows: street musicians, buskers, are now keeping music alive in our cities often more efficiently than musical institutions. In the Sonic Genome the rigid borders between performers and listeners, stage and audience, are broken and the music flows freely around in its space, or in fact creating its own space. Its sound is an exploration of the sonic environment, where both performers and listeners are immersed. This is more and more obliterated by canned music funneled directly into our ears in order to forget our drab surroundings. Echoes, reverberations, call and response in space help sound proprioception and realization.

It is a ritual for our times. Traditional rituals largely lost spiritual content and social rituals are dominated by a hierarchy of values determined by profit and business, but the Sonic Genome offers a new paradigm, an utopian blueprint for music and society. All participants—musicians and listeners alike—felt transformed after the experience.