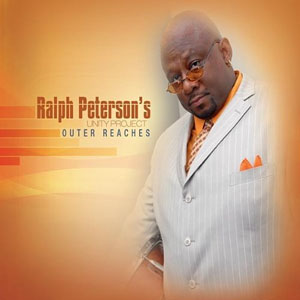 To build the kind of staying power that keeps fans coming back for more, you've got to have consistency. In a jazz world where artists are expected to be self-reliant when it comes to promotion, dropping out for more than half a decade can have some serious implications. Emerging loudly as part of 1980s young lion supergroup Out of the Blue, drummer Ralph Peterson has since built a significant discography with his instrumentally intriguing Fo'Tet, last heard on Fo'Tet Augmented (Criss Cross, 2004), as well as in more conventional contexts like the quintet of new young lions on Tests of Time (Criss Cross, 2003).

But with a six-year gap between recordings, does Peterson have what it takes to get back on the radar? Based on Outer Reaches, absolutely. Debuting his Unity Project, Peterson looks fondly back at organist Larry Young's 1966 Blue Note classic, Unity. But like his kick-ass Art Blakey homage, Art (Blue Note, 1994), Peterson may mirror the lineup of Young's career watershed, but transcends mere imitation through unbridled energy and a modern approach to the organ-driven ensemble that, in Unity's time, shattered misconceptions about the venerable Hammond B3's potential. Peterson's always carried the torch for bop's hardest-hitting drummers—Blakey, Roy Haynes and Max Roach—but he's always brought his own kind of incendiary enthusiasm and appealing writing to every project.

More than just a tribute to Unity, sporting four of its six tunes, Outer Reaches also gives props to Woody Shaw. Alongside the trumpeter's modal classic "The Moontrane," up-tempo swinger "Beyond All Limits" and fiery but Latin-esque "Zoltan," all from Unity, Peterson also includes the gentler waltz-time "Katrina Ballerina," from the trumpeter's overlooked The Moontrane (Muse, 1974). That Unity's tracks mirror the original arrangements—right down to starting "Zoltan," with a drum solo that expands on the innate power of Elvin Jones' original—doesn't detract from Outer Reaches speaking with the collective voice of Peterson's Unity Project, featuring a trio of relative unknowns who deserve broader recognition, in particular organist Pat Bianchi, who proves himself far more than a Joey DeFrancesco wannabe on tracks like "Beyond All Limits" and Unity's cover, Thelonious Monk's "Monk's Dream," channeling Monk's quirky pianism on his own instrument.

Compositionally, Peterson's no slouch, contributing strong, blow-ready tunes that fit Unity's stylistic purview, with the hard-swinging title track, lyrically balladic "On My Side" and ambling "An Inside Job."

But it's the inclusion of guitarist David Fiuczynski on two tracks that suggests Unity Project is looking beyond its titular namesake into some of Young's later work. On "Zoltan," Fuze's grittily overdriven solo foreshadows Young's involvement in drummer Tony Williams' Lifetime, while the closer—a high volume, high octane, trio-only version of guitarist John McLaughlin's "Spectrum," from Williams' iconic Emergency! (Polydor, 1969)—is delivered with reckless abandon and utter aplomb by Fuze, Peterson and Bianchi.

Peterson may be battling the inevitable results of being absent for more than half a decade, but on the strengths of Outer Reaches, he deserves to be welcomed back, and with open arms. Hopefully this is the beginning of renewed activity for the drummer, because he's been away for far too long.

The Moontrane; Monk's Dreams; Outer Reaches; Katrina Ballerina; Beyond All Limits; On My Side; An Inside Job; Beyond My Wildest Dreams; Ritha; Zoltan; We Three Kings; Spectrum.