Francois Carrier: Out Of Silence

By Mark Corroto
November 17, 2017
Sign in to view read count 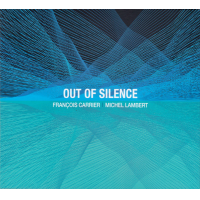 There is this phenomena that is becoming apparent (at least to me) in the music of free jazz musicians. It is a deep-rooted insecurity. First I thought it was a component of the music, a certain stability in instability. But spinning the latest release from saxophonist François Carrier and drummer Michel Lambert, one gets the sense that fully developed, mature musicians can perform free jazz at its highest level without all the anxiety.

Such is apparent with Out Of Silence a 2015 live recording from London, it follows the FMR Records IO (2015) and Shores And Ditches (2012). Carrier and Lambert have performed together for nearly two decades now, releasing music as a duo, trio, and quartet. With all due respect to the various lineups, the recordings of Carrier and Michel Lambert in duo are the finest output for both of these players. That goes back to the security of their well balanced maturity as musicians.

Opening with the lengthiest piece, "Out Of Silence" (15:25), their laid-back approach might be mistaken for insouciance. Nonetheless, it is the same nonchalance one might also hear in Lester Young's playing. Quite like a duck, they appear calm on the surface but paddle like hell underneath. Here and on "When The Heart Starts Singing," Carrier switches to a Chinese oboe, like Peter Brötzmann is want to do with his tarogato, for contrast. He balances his alto saxophone, let's call it his speaking voice, against the much higher register of the oboe. The contrast is striking, as is Lambert's conversion of mechanical energy into electric. He meets the saxophonist with his perpetual motion machinery. The other six pieces are consistent and fruitful, as the pair are in sync continuously. Carrier's tone is extraordinarily beautiful for a free jazz performance. Such is the imperturbable sound of a self-possessed musician.

Out Of Silence; A Thousand Birds; For No Reason; Soul Play; When The Heart Starts Singing; Meadows And Shores And Hills; Happy To You.