By Paul Rauch
September 3, 2020
Sign in to view read count 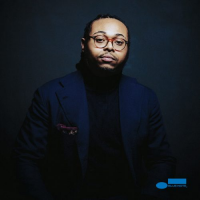 At the moment Omega, the debut solo album of young alto saxophonist Immanuel Wilkins, was released on Blue Note in May 2020, America was ablaze with the fight for justice following the murder by police of George Floyd in Minneapolis. The sessions for the album were recorded prior to the event that propelled the Black Lives Matter movement, and spread to the streets in demand for racial justice like no other time in American history. Yet the album is an opus to the Black experience in America, depicting injustice that bears the age of centuries, and illuminates the fight taken on by a new generation, in this case, both sociologically and musically.

The brilliance of the 22 year old altoist and composer is plainly evident on each track of Omega, as is the deep and transformative talents of the young quartet he leads. Pianist Micah Thomas, bassist Daryl Johns and drummer Kweku Sumbry leave the listener with the understanding that these young artists are bound by the common thread of leading jazz music deep into the new century, bringing with them a style that is neither straight ahead or avant-garde. The quartet plays in a new firmament that employs deep lyricism and melodic content, surrounded by more than ample room for imaginative soloing that bears the imprint of modern life in this medium we can refer to as modern jazz. As an alto player, Wilkens glides between Charlie Parker and Ornette Coleman with no apparent degree of separation. The adventurous spirit of Gary Bartz comes to mind as well, most notably within the notion that Wilkens' playing more bears the traits of unbound restlessness and musical adventurism heard from intrepid tenor players following the vapor trail of the great John Coltrane.

That's a heap of praise and expectation for this young artist, and an entire generation of young players. To Wilkins' advantage is his time spent being mentored by the likes of Wynton Marsalis, Joel Ross, Gerald Clayton, Orrin Evans and Ambrose Akinmusire. Time spent touring with pianist Jason Moran provided refinement and positive direction, making him the perfect producer for this effort that represents one of the finest of this turbulent and historic trip around the sun for humanity.

The opener, "Warriors," epitomizes modern jazz in 2020, with an intricate melody swinging within polyrhythms, providing ample space for post-bop interpretation. Wilkins plays with fire, and shape shifts into more tender moments. It carries a message and a call to action and social responsibility, or as Wilkins remarks, "It's about us serving as warriors for whatever we believe in."

"Ferguson—an American Tradition," imagines the pulse of the nation in 2014, when Mike Brown Jr., an unarmed teenager, was shot and killed by a police officer in Ferguson, Mo. Officer Darren Wilson was not indicted, triggering a rage in the black community, and shedding light on centuries of deadly aggression directed toward African-Americans at the hands of the police. Wilkins' playing constitutes a dialog of revolution, his social awareness expressed through the lens of his sublime discipline of virtuosity rising from, and channeled towards, the real, everyday threat of police violence experienced by Black Americans.

Two pieces are more inspired by respect for generations past who have paved the way, both in terms of activism and musicianship for Wilkins, and a new generation of jazz artists. "The Dreamer" honors activist/author James Weldon Johnson, a ground floor founder of the NAACP. "Grace and Mercy" carries a similar vibe, with Wilkins and Thomas leading the way forward harmonizing the melody, and soloing introspectively between the graceful playing of Johns and Sumbry. While jazz composition among new generation artists tends to fall somewhere between jazz and modern classical music, these two melodies seem to eschew jazz music's transition to institutions of higher learning, and follow the path of jazz more in a neo-folk vein. Sumbry's drum and cymbal work creates a wider, more ethereal transition for the listener. His playing alone, alludes to this piece being the spiritual center of the album.

Undoubtedly, the four-part suite composed by Wilkins while still a student at Julliard stands out as the emotional epicenter of the entire concept from which this project arose. Both contemplative and unwound, "The Key" and "Saudade" feature exhilarating expressionism and melodic discipline, culminating in Wilkins' most explosive playing on the record. "Eulogy" features diametric ends of a thread that begins with Thomas' elegance and transitions into Wilkins' spiritual, soul searching intensity. Sumbry leads the band into "Guarded Heart," the finale of this 20 minute suite that lyrically characterizes the album.

The title track is the closer, and perhaps the most spiritually joyous of this collection of Wilkins' original compositions. Once again, Thomas is the piece of the rhythm section that stands out, gifting Wilkins with a harmonic and rhythmic base to solo with a profound sense of freedom.

As a new generation arrives on the international jazz scene, one comes to the realization that while much changes generation to generation, much as well, remains the same. It seems there is always young, unabashed talent waiting in the wings in jazz, which is of course, a huge positive. What makes this new generation special is the ability to blend generational traditions, delving into new modes and developing them with a tap root still firmly inplanted in generations of jazz history. Innovation has a habit of floating endlessly in a sea of isolation and emptiness without being attached to something that has meaning over time. Wilkins can be aggressively austere, searing and unabashed, as well as sensitive and embracing, often within the confines of a single solo. His playing is electric within a staggering tonal range. Omega just may be one of the most relevant recordings of this epic year of 2020, if not for its acceptance of social responsibility, then for its sheer virtuosity, and colorful melodicism. The future of jazz is in the hands of musicians like Wilkins, and a host of others too populous to name. That marvelous fact gives jazz fans much needed worldwide hope, steeped in trust.