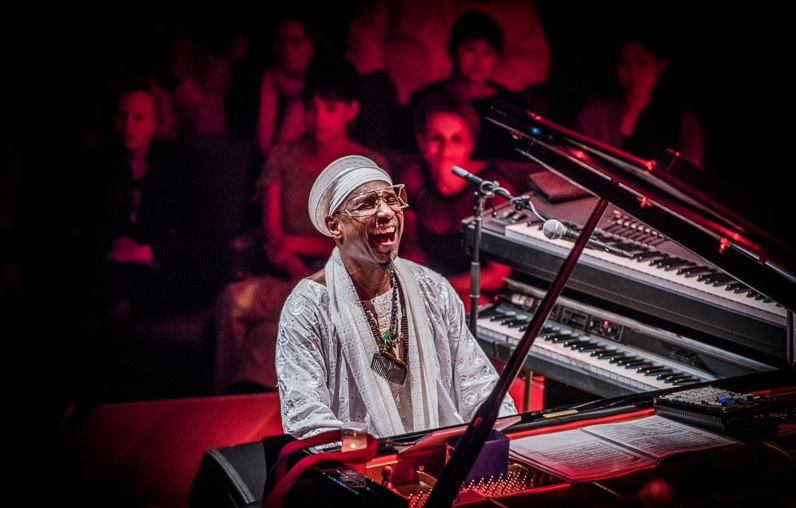 "You don't really listen to an Omar Sosa concert so much as experience it. The Cuban-born pianist's overall demeanor exudes a sense of calm and deep reflection, while a spiritual connection to music and his ancestors comes through in his piano playing." —NPR Music

At the commencement of each evening of his four-night residency at SFJAZZ, Omar Sosa, clad entirely in his trademark white, gown-like attire with flat-topped white cap, entered the stage holding a lighted white candle which he placed on his piano. Then, with his left hand, he serenely fingered his Yamaha Motif XF8 while playing a Yamaha CFX Concert Grand piano with his right. A Fender Rhodes was under the Motif, while an 88A Micro Korg was mounted in the center, as was a GoPro video camera.

Sosa is no stranger to San Francisco, where SFJAZZ has its concert hall. A native of Camaguey, Cuba, Sosa first arrived in the city in 1995 and put up roots before moving to Barcelona, Spain in 1999. The first two evenings featured his Bay Area collaborator John Santos, as well as a guest appearance on the second evening by trombonist and recording engineer Jeff Cressman. Santos, in addition to being a bandleader (Orquesta Batachanga, Machete Ensemble, John Santos Quartet), is also a music educator and board member at SFJAZZ.

Appropriately, given his espousal of the Afro-Cuban and Afro-Puerto Rican religion Santería, Sosa began with an invocation to Elegua, the Orisha of the roads and crossroads, whose spirit must be invoked at the commencement of a ceremony or ritual. As Santos intoned in Yoruba and Congo, Sosa clapped his hands. Mozambique native Childo Tomas entered with a twirling tube and then thumbed a pickup-equipped kalimba (mbira, thumb piano), which he held sideways as he played.

The two other members of Quarteto AfroCubano, drummer Ernesto Simpson and saxophonist/flautist Leandro Saint-Hill, then entered and took their places; the beat swerved towards funk, with Sosa standing and taking a bow at the end. As the keyboardist's "Mi Conga" commenced, Sosa chanted, while Simpson turned to mallets and then sticks before Saint-Hill pierced the mix with some lovely flute playing. The band's chants of "cha cha cha," with its dynamic rhythms, drove two women out of their seats situated directly above and to the rear of the ensemble, dancing in tandem. Saint-Hill then turned back to his flute. The audience joined in, clapping hands.

Next up was Sosa's atmospheric "Iyawo," which featured Saint-Hill on evocative soprano saxophone. Santos moved forward on the stage with an intriguing shaman-like staff which produced shimmers of sound, empowered by its attached cymbals. The collaboration went on in a similar vein, through "My Three Notes," "A Love Lost," "Sad Meeting" and, finally, "Old Afro a Baba," before a standing ovation brought Santos and Simpson back for a duet on "Muevete en D."

The next night saw Sosa again bring his white candle, place it on the piano and stand to and play his synthesizer and piano. It was the beginning of a night with the very special JOG Trio. The group features German trumpeter (and rapper) Joo Kraus and well-known percussionist Mino Cinelu. Whereas Kraus played on Sosa's commissioned CD Eggun (Ota Records, 2012) (a tribute to Miles Davis' classic 1959 Columbia album A Kind of Blue), the Martinique-born Cinelu has played with both Davis and Weather Report, as well as Pat Metheny, Christian McBride, Geri Allen, Sting, World Trio, Kenny Barron and many others.

In addition to percussion classics, such as mounted African djembe, Cinelu held forth on a Zildjan Constantinople cymbal (an instrument renowned for its purity of tone), the Roland SPD-SX (a mounted sampling pad), and a Roland HPD-20 (a digital hand percussion instrument)—both of which he employed to prodigious effect.

The evening featured two sets. The first offered sublime tonal flavors which brought the members' Miles Davis connections to mind. Cinelu soloed on triangle and held the djembe; Sosa reached inside his piano to whisk the strings; and Kraus added effects to his trumpet. Cinelu paid tribute in a chant-song to the "spirit of the drum," sitting atop his cajón and riffing with Sosa. The vibrant mix came to a frothy climax, with Sosa and the other musicians shaking hands.

Following an intermission, special guest saxophonist Yosvany Terry joined the ensemble. Shaking his white-beaded chekeré, an instrument he learned at the feet of his father Eladio "Don Pancho" Terry Gonzales (a violinist and master of the chekeré), Terry dramatically stepped down from the theater's upper stairs—playing his way past enthused and enraptured audience members as he made his way to the stage. After his lustrous solo, the band moved into "Alma," the title track to Sosa's 2012 CD of the same name. Now residing in Harlem but born and raised, like Sosa (and Saint-Hill and Simpson), in Camaguey, Cuba, Terry's presence served to immediately energize the ensemble, taking the sound to a new level. Cinelu joined the mix, his left hand directly tapping his snare drum's skin while his right held a stick. Taking to his feet, he played his Roland, adding an electric feel to the mix, while Terry soloed on soprano.

"Chonguica" offered Kraus on muted trumpet and more sweet soprano from Terry, while "Light in the Sky" again featured Cinelu on cajón and his Roland pad and drum. "Para Ella" and "Angustiado" were also featured. When Sosa again reached inside his piano to play the strings directly, Cinelu played the grooves lining the theater's walls. "1993" rounded out the set.

Solid appreciation from the crowd brought them back for "Cha Cha du Nord," which offered more chekeré from Terry, interacting with Sosa's stellar piano work. And special guest trombonist Cressman—who, as Sosa told the audience, had enthusiastically welcomed Sosa back when the pianist first arrived in San Francisco—joined the band. Cinelu again sat atop his cajón and played passionately, while Terry contributed some exuberant tenor.

Sunday, the final night of Sosa's residency, brought the US premiere of the GFS trio: Sosa; Sardinian-born trumpeter Paolo Fresu, who is famous in Europe but less so to American audiences; and renowned Mumbai (Bombay)-born percussionist Trilok Gurtu, known for his work with Oregon, John McLaughlin, Don Cherry and John Tchicai, among many others.

A synthesized drone, which brought to mind the tamboura—the instrument which anchors the sound in Indian classical music—kicked off Gurtu's "Monk-E Desh." Fresu faced Sosa, playing his trumpet with one knee perched on a chair, and then switched to flugelhorn, the trumpet alternative used by Miles Davis on 1960's Sketches of Spain and 1957's Miles Ahead. For Sosa's "Toridanzon," the pianist pumped out a Latin rhythm with his feet, singing into the mike and motioning to the audience to click their fingers, while Gurtu held forth on tabla and Fresu offered bold and brash flugelhorn. For Fresu's "S'Inguldu" (also from Alma), Gurtu donned wristbands resembling watches and held forth on the cajón. Sosa played the strings inside his piano and then sang, bringing forth some nonsense syllables countered by Gurtu's super-fast percussion. A Konnakol (Carnactic Indian vocal percussion) battle ensued. Gurtu brought an amazing array of gear to the set (including a mounted djembe, reflecting the African influences he has incorporated into his percussion mix), and a highlight was when he played a ten-liter metal bucket with water inside, using his stick to lower the tone.

The rest of the set followed in a similar vein with Gurtu's "Balatho, Fresu's "Nenia," Gurtu's "Pathri" and, finally, Sosa's "Angustia," as Sosa, clad in his white garb, stood in front of the enthused audience waving his arms.