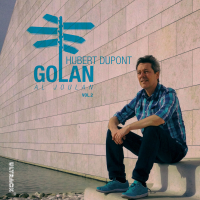 French bassist, composer and activist Hubert Dupont had been touring with a trio called Sabil, playing their initial concert at the Institute of the Arab World in 2013. It was there that he formulated the concept for his multi-cultural, genre-bending Golan/Al Joulan Vol. 1 (Ultrabolic, 2016). In biblical lore, Golan is described as "a city of refuge" while geopolitically, the area had been part of Syria, then captured, occupied and later annexed by Israel. Dupont allows the music to develop under the influence of the region, it people and its politics. He extends his mélange of Arab music and jazz on Golan/Al Joulan Vol. 2 with the same sextet in place.

Dupont had been a sideman for Robin Eubanks and Steve Lacy and recorded with Rudresh Mahanthappa. In working with the Sabil trio, he had teamed with two Palestinian musicians, percussionist Youssef Hbeisch and oud player Ahmad Al Khatib, both part of the Golan releases. The remainder of the group is French flautist Naïssam Jalal, Tunisian violinist Zied Zouari and reed player Matthieu Donarier. Donarier has recorded with Daniel Humai and released three solo albums.

The four long compositions—averaging ten minutes—were all written by Dupont and recorded live at Musiques au Comptoir, a club in the Paris suburb of Fontenay-sous-Bois. Dupont essentially provides structure as jumping-off points for this improvised music. On the opening piece "Tusi," Dupont lays out a rich, slightly slurred bass line joined quickly by Zouari's equally skewed violin. Hbeisch brightens the tempo and the clarinet and flute join in a genre-defying blend of styles. Initially, more somber, "Accept the Changes" begins with clarinet, violin and oud, Donarier taking an extended solo that grows progressively in force then gives way to solos from Hbeisch, Al Khatib and Jalal. Much of "Furatain" belongs to Al Khatib and Hbeisch though Dupont allows himself a complimentary solo before the piece slows to a finish. The closing "Midday Promise" is the most open and uplifting of the compositions as it whirls in an ethereal manner, dominated by clarinet and flute and anchored by Hbeisch's steady beat.

Shadings of Middle Eastern music in jazz date back to Duke Ellington's "Caravan" and Dizzy Gillespie's "Night in Tunisia," but rather than a cultural assimilation of styles, they were constructed more in the vein of sampling regional palates. Golan / Al Joulan Vol. 2 draws heavily on Arabic music but freely plays with cultural identity adding flavors of North Africa, Eastern Europian and Western Jazz. The result is a satisfying cross-breeding of cultural influences that stands apart from an artless fusion experiment to create an engrossing byzantine, organic sound.