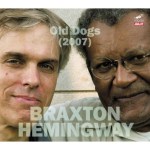 It is very difficult to separate the music of saxophonist Anthony Braxton and percussionist Gerry Hemingway from the actual experience of listening to four-disc, four-plus hour Old Dogs (2007). Each disc represents a morning or afternoon's work, recorded at Wesleyan University in early August, 2007, requiring almost complete immersion—letting go each moment, as it passes. There is little possibility of consuming this music in one sitting; it requires listening in either small bites, or an unfettered approach of allowing the music to flow through.

Hemmingway was a member of Braxton's quartet from 1983-1994 (one of the saxophonist's most successful groups), along with bassist Mark Dresser and pianist Marilyn Crispell. Braxton's past history with Hemingway paved the way for these inspired sessions; the two reuniting twelve years after the end of the quartet.

Braxton has recorded many duo outings with a wide variety of players, including Joe Morris, Fred Frith, Taylor Ho Bynum, Evan Parker, Andrew Cyrille, and Derek Bailey. Here, he plays seven different saxophones (his tenor had been stolen), while Hemmingway often steps away from his drum kit to take up various instrument he found at the Wesleyan facility, including marimba and vibraphone—both of which he has played on other recordings.

The variety and diversification of sound heard here is staggering. Without dividing each hour-long disc into tracks, the pair seamlessly knits the different improvisations together. The overall interplay or conversation between Braxton and Hemingway can be the emphasis, or smaller parts of the whole can be encountered and treasured. In 100 years of recorded jazz music, early recordings by artists like Louis Armstrong were limited to but three short minutes; with Old Dogs (2007)<./em>, the outstanding Braxton and Hemmingway were granted a full hour at a time, and they provide a total experience of sound.