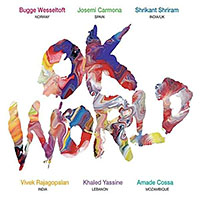 There are artists who find their niche and then spend the rest of their careers carefully honing that one thing—often to great effect and, in some lucky cases, great success. Then there's Bugge Wesseltoft. Since emerging in the mid-'90s with his techno/house/electronica-driven New Conception of Jazz series—which didn't just establish him in his native Norway but, with guest appearances from artists like John Scofield and Dhafer Youssef, abroad as well—the keyboardist/producer/Jazzland Recordings label head has shaped a career defined by diversity. From electro-centric solo piano excursions like Playing (Jazzland, 2009) and beautiful slow-motion jazz standards on Songs (Jazzland, 2012) to a last-minute fill-in for bassist Arild Andersen's guitarist, Frode Alnæs, at Mai Jazz 2008 in Stavanger, where he effortlessly flowed between Norwegian and Swedish traditionalism and McCoy Tyner-like flights of modal fancy, Wesseltoft's reach has always been broad. But it just got broader with OK World, which brings the keyboardist—here, focusing solely on acoustic piano—together with a group of musical friends with whom he has become acquainted during his many travels across the globe.

On this largely acoustic session, with the exception of Indian-born/Britain-resident Shrikant Shriram—who, in addition to flute, contributes some fine fretless electric bass—Wesseltoft is joined by players from Spain (guitarist Josemi Carmona), India (percussionist Vivek Rajagopalan, who brings the ethnic mridangam and cangira to the date), Lebanon (percussionist Khaled Yassine, whose instruments of choice are darabouka, cahoum and bendir and who is also a member of Tunisian oudist Anouar Brahem's Astounding Eyes of Rita group) and Mozambique (percussionist/vocalist Amade Cossa, who contributes djembe, congas and bass drum). OK World's ten original compositions come from all six members—individually, collectively and with the contributions of others including guest vocalists Georges Nehme (Libya) and Maryam Saleh (Egypt), who sing plaintively on the initially dark-hued "Moving Mountains," which is also a feature for Wesseltoft, who opens the song (and the album) alone, and Carmona, whose nylon-string guitar is as definitive a color and voice to OK World as Wesseltoft's intuitive pianism and Shriram's lithe yet punchy bass playing and feather-light flute work.

The tune then picks up steam, with Shriram and the percussionist's leaping into double time as Carmona's solo comes to an end, leading to an in tandem solo for Rajagopalan, Yassine and Cossa that contributes to making "Moving Mountains" an early indicator of the cross-cultural fusion of rhythm, harmony and linear lyricism to follow. That the album was recorded both in real time and through file sharing in studios as distanced as South Africa, Madrid, Lebanon, Mumbay, Kairo, Maputo and Norway is a remarkable accomplishment in itself, given the album's synchronous energy and musical confluence.

Nehme also appears on "Mawwal," his voice layered into a deep, solemn choir that ultimately leads to a more propulsive, trance-inducing, drone-based middle section where Shriram's lissome flute work is layered over Wesseltoft's carefully placed piano and Shriram's overdubbed bass, which combines with the three percussionists, all magically avoiding each others' toes here and throughout the recording to create an unshakable and absolutely irresistible groove—just one of many to be found across this 63-minute set.

An even larger cast of guests bring the buoyant optimism of Wesseltoft's "My World is OK" to life—an upbeat piece that revolves around the chanting of a simple but compelling line: "My world, my world, my world is OK. " When repeated enough, it actually starts to convince, just a little bit, despite all the real troubles taking place around the globe. It's a wonderful thought, indeed—even if the harsher realities of life as it is today sadly suggest otherwise. Still, if Wesseltoft's world is OK, it's because the music of OK World possesses a rare and wonderful ability to bring a disparate group of musicians from a multitude of cultures together for a recording that's as deep as the human condition and as rich as the emotions that drive us all. Perhaps, if people from so many parts of a troubled world can come together for an OK World, then there is hope for our world yet.