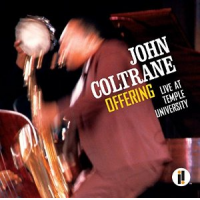 Discovering unheard John Coltrane material is the Holy Grail for serious music devotees, and the imminent release (Sept.23,2014) of a 1966 live date in the form of Offering: Live at Temple University on the Impulse! label (in conjunction with Resonance Records and Universal Music) to join The Olatunji Concert and One Down, One Up Live at the Half Note in the Coltrane archive is good news, indeed, for those wishing to explore the iconic saxophonist's later years. Adding significantly to the first-class feel of this production is the inclusion of a 23-page liner booklet written by the always perceptive Ashley Kahn.

The performance starts before the tape begins rolling, so the opening "Naima," is slightly clipped, but two things are immediately evident: first that 'Trane is in absolute peak form—his improvising skills have never been sharper; second: this is not the "Naima" from Giant Steps or even Live at the Village Vanguard Again. It is almost impossible to pick out more than a few snatches of the original melody, and stripped of its harmonic benchmarks, Coltrane's acidic rhapsody cuts through the elliptical accompaniment with exuberant ferocity—muscular in all registers. Alice's solo is crowded with effusive melodic information—delivered in a strangely virtuosic fashion. Imagine Oscar Peterson on LSD and you get the idea. Johnson's contribution is more of a theory than an audible reality, but the lawn-sprinkler hi-hat and kick-drum battery of Ali is clearly evident.

The 26-minute-long version of "Crescent," has evolved from the lonely melancholy of its original iteration into a darker, edgier performance at Temple University. Although he hews far closer to the melody—this "Crescent" is looser and freer and imbued with an agitation that becomes more profound when the four percussionists emerge from nowhere. Sanders, in his first appearance, rips the tune from its moorings with harsh screams, squeals, and gurgling multiphonics —effectively creating an alternate reality that threatens to permanently raise the hair from the back of the listener's neck. Over the obstreperous percussion, Alice churns out a fierce melodic cascade that doesn't really reference the changes, per se, but burns with a kinetic flow reminiscent of Cecil Taylor, one of her husband's favorites. Just as she locks into a dialog with the multiple drummers, there is the sudden inclusion of apparently uninvited alto saxophonist Arnold Joyner—who actually straddles the divide between the extremes of Coltrane and Sanders quite well with coruscating squiggles and shrieking repetitions. Coltrane returns, paraphrasing the melody and extrapolating it with a high-energy sermon that combines velocity and speaking-in-tongues into a tour-de-force that ends quite abruptly.

"Leo," opens disc-2 with its violent, fragmented theme, and Sanders hits the gates first with sandblasted wails and whinnies. Five minutes into Sanders' brutal novella, 'Trane begins vocalizing cell-like structures that mirror his own saxophone ideas. It's a new expression (much different from the chants on A Love Supreme) that he will return to several times in this concert. Despite the intense agony and ecstasy inherent in the Sanders exposition—"Leo" really belongs to Ali. Above the percolating backdrop of congas, bata-drum and cowbell, Ali's five minute drum solo is a muscular fusillade that bristles with kinetic energy and kaleidoscopic shifts in direction.

In stark relief of the lengthier material on this recording (21 minutes is the average duration on the four other compositions) the title track clocks in at a mere 4:19. "Offering" alternates between the pensive and the volcanic, with a heavy emphasis on the former in the elegiac form of the rubato ballad Coltrane had long since perfected.

That leaves the iconic "My Favorite Things," as the evening's benediction. Johnson can finally be heard via his a cappella introduction (which in 1966, had also served as a prime feature for the absent Garrison.) Johnson's pizzicato is more aggressive—at times he sounds like he's trying to rip the strings off the instrument—nonetheless, it's an impressive statement, and it's a pity that so little has been heard from him in the intervening years. 'Trane is off to the races on the straight horn, elucidating the familiar themes but without much in the way of support. Alice is way off in the background (there appears to be just one operating microphone in this recording—which was done at the student radio station) and with Johnson once again invisible in the mix—it's just Coltrane and the drummers. When it's Alice's turn to solo, however, she is much more prominent, and her left hand sounds a lot like what her predecessor, McCoy Tyner was known for: alternating between quartal harmony and thrashing fifths; balanced with quicksilver right-hand runs, it's one of the most powerful and illuminative episodes in her recorded output, and one can only wish it had been captured in higher-fidelity.

Again, an unfamiliar horn wafts in- -this time it's 18-year-old college student Steve Knoblauch, at 'Trane's invitation, on alto. Knoblauch solos briefly, with an intelligent "New Thing" awareness before Coltrane returns, on fire, with eight minutes of furious soprano whiplash that seems to recapitulate and expand every inspired idea he ever draped across the skeletal structure of this forever transformed show- tune .

For those inclined to dismiss "late-period 'Trane" as an unfortunate derailment, Offering probably won't induce many conversions. But for those who are willing to go there—this recording represents a new opportunity to hear the master at the absolute height of his powers reaching into his personal vortex and showering sparks into our darkness.