Rick Germanson Trio: Off the Cuff 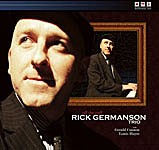 With so many mainstream piano trios flooding the market, it's increasingly difficult to separate the wheat from the chaff. It's easier when, in the instance of a Brad Mehldau, John Taylor or Enrico Pieranunzi, the artist's voice is so distinctive and approach so readily identifiable that there can be little doubt of its relevance. It becomes a greater challenge with pianists working this space who combine original composition with the Great American Songbook and, occasionally, more contemporary popular sources. Still, there are pianists who, in their unassuming honesty, feel and touch, rise above the crowded arena. Like Lenore Raphael, who brings elegance and charm to everything she touches, Milwaukee native/New York resident Rick Germanson is a straight-ahead player who may not move the music forward in great leaps, but plays without presumption, approaching everything he touches with heart, soul and improvisational élan.

Off the Cuff features Germanson's new trio, with Gerald Cannon back from You Tell Me (Fresh Sound New Talent, 2005) and Louis Hayes replacing the more outgoing Ralph Peterson. Hayes' more delicate approach may contribute to Off the Cuff's more graceful experience, but the trio can when it wants to, as it does with aplomb on the short but sweet Arlen/Mercer classic, "The Dream's On Me." The veteran Hayes who, over the course of 40 years, has played with legends including Horace Silver, Cannonball Adderley, Woody Shaw and McCoy Tyner, approaches the music with a largely light touch, although he hits hard on his equally brief and impressive solo over the ending ostinato of "The Dream's On Me," a clear album highlight along with his intro to Germanson's fiery "Brick."

Cannon's a younger player with a less extensive pedigree, but with work ranging from Roy Hargrove and Peterson to Sherman Irby and Steve Turre, it's clear that he's a capable player who can (and does) work hand-in-glove with Hayes as a strong rhythm partner, while delivering his own share of strong and confident solo work on tunes including Germanson's ambling "Daytona," where the pianist's riff-based intro leads into a comfortable swing to provide the bassist all the freedom he needs. There may be clear delineation of solos on the disc, but when Cannon and Hayes enter on Germanson's challengingly fervent "Jill's Song," it's clearly an egalitarian unit with strong ties to the Bill Evans school.

Germanson, whose history includes work with Pat Martino, Eddie Henderson and Tom Harrell, may fit firmly in the mainstream, but his harmonic sophistication places him a little more left-of-center than many. His solo piano feature, "The Way of Water," combines abstract impressionism and brief moments of more vibrant expressionism, while he exercises just the right combination of reverence and flexibility on Vernon Duke's enduring ballad, "Autumn in New York," stretching it out to become the disc's longest track without ever overstaying his welcome.

Germanson may not rattle any revolutionary cages with Off the Cuff but it's a compelling set, played with heart and honesty, that demonstrates why mainstream jazz and the music at its foundation continues to possess popular appeal.

Quagmire; Jill's Song; Daytona; Up Jumped Spring; The Time the Dream's on Me; Wives and Lovers; The Way of Water; Autumn in New York; Brick; Any Thoughts?