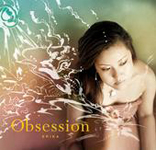 Young vocalist Erika springs a surprise on herself with Obsession. Japanese by birth and schooled relatively recently in jazz, she is not only pitch-perfect while singing in English, but negotiates Brazilian charts in Portuguese with near perfect emotion (if not always perfect diction). The biggest surprise of all is the Japanese repertoire, with which she rounds off her wonderful album.

Using her voice as an instrument, Erika exudes a deep passion for song. She is able, therefore, to dive deep into the lyric and find the nuances of emotion hidden in the relationship of imagined characters within the narrative. With a robust contralto, she spins a hypnotic story in song, letting her voice soar and swoop as she tells stories with superb realism. Her phrasing rolls with rhythmic splendor and is almost married to the swing of each song, as she weaves her lyric in and out of Essiet Essiet full-blooded bass. She is also apt to let her emotion-laden lyric sparkle in the subtle coloring of Willard Dyson's drums. On what is the album's stand-out track, Milton Nascimento's "Bridges/Travessia," the vocalist lets it all hang out as her voice resonates deep within the plucked splendor of Romero Lubambo's guitar.

Erika's confidence echoes throughout the album. She deftly pulls off some pretty challenging music in the leaping melodies of Djavan's "Samurai" and "Oceano," and the minor modes of Chico Buarque's "Atras da Porta." She does the same with the swagger of Van Morrison's "Moondance," Heikki Sarmanto's fey "My Little Brown Book," and Antonio Carlos Jobim and Vinicius De Moraes's "Chega de Saudade." Switching from the passionate blush of Brazilian music to the swing of standards from further up north also requires some virtuosity, and Erika demonstrates plenty. "Moondance" is a fine example, as she shows her deep affinity for swing. Because of her intonation, she brings a fresh approach to the song, which has already been adorned by a superb little break from Cuban saxophonist Yosvany Terry. Terry excels as well, as he plays heavenly arpeggios on Ivan Lins' "The Island."

Erika and pianist Carlton Holmes bring a lovers' simpatico to the Carl Sigman/Jimmy Van Heusen classic, "I Could Have Told You." But Holmes also brings a special skill to this album. As a producer, Holmes shows a penchant for rich textures and zones in on the perfect tonal color of the music, no matter where it originates from. His feel for the shuffle and swooning grace of Brazilian music is genuine and, although perhaps appropriately schooled for the date, he also pulls off the Japanese charts with aplomb.

Erika shows great promise with this, her signature disc. Surely great things in music must be expected of her as she surfs through the world of music to find characters that she brings to life in song, again and again.