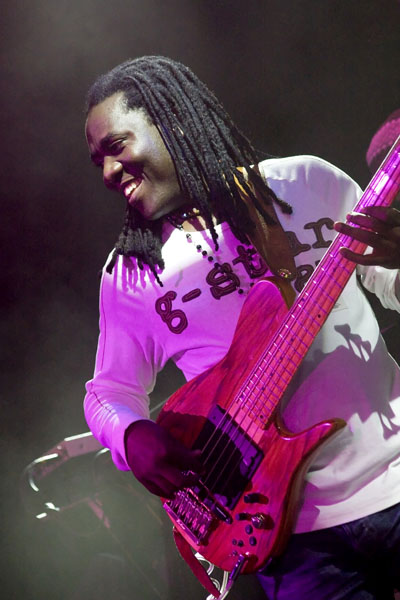 slideshow
For the first time in the Dominican Republic, Richard Bona, for one concert only!

Richard Bona, the well-known bassist and vocalist from Cameroon will perform a single concert on his first visit to the Dominican Republic on Wednesday October 12, 2011, at 8:00 PM at the Teatro La Fiesta of the Jaragua Hotel.

Latin Jazz Kafé DD, presided by David Drumeaux, will be the producer of the encounter that Bona and his band will have for the first time with a Dominican public that for years has enjoyed his musical offerings.

Richard has been invited to the country several times, and has been keen on coming and sharing his music with this particular audience. For this occasion, Bona brings his many jazz and world music hits, along with a variety of other genres that will surprise many of his concert-goers. “He is taking advantage of his visit to the Dominican Republic to present, to this public, his most recent creations; we guarantee an unforgettable night for lovers of all music," says David Drumeaux.

Bona is a multi-instrumentalist—with an incredible natural ability to learn any instrument by just watching how it is executed&#151as well as being a very capable singer. Bona is a musician and a composer first, and a bassist second, and his music possesses the integrity of having each instrument designed to play a role and contribute musically to the essence of the theme; to an area or space whose center is occupied by the melody, and not by any particular instrument.

Bona's language, in his dual role as composer and musician, reflects his many and varied influences, from the complex harmonies of jazz and the intricate polyrhythms characteristic of traditional African music, to the importance of melody, which is derived from his interest in pop and soul. He has played with the likes of Larry Coryell, Michael Brecker, Pat Metheny, Mike Stern, Steve Gadd, Bob James and Chick Corea, among many others.

Opening the concert will be the host country's Rafelito Mirabal & Sistema Temperado. This is the oldest and most experienced group in the Dominican Republic, since 1987, playing music from artists including Pat Metheny, Weather Report, Steps Ahead, John Scofield, Mike Stern, Elements, and Special EFX. The group now adds the Dominic Republic's folkloric wealth, playing original compositions and arrangements that honor these roots by incorporating Pri-Pri, Gaga, Guloya, Pambiche, Classic style and typical style Merengue Classic, and many more, to Jazz. Mirabal states that ¨Sistema Temperado comes with a tremendous repertoire of high-octane music for this concert, that most certainly will leave the stage on fire for the concert by the famous Cameroonian musician, Richard Bona! “