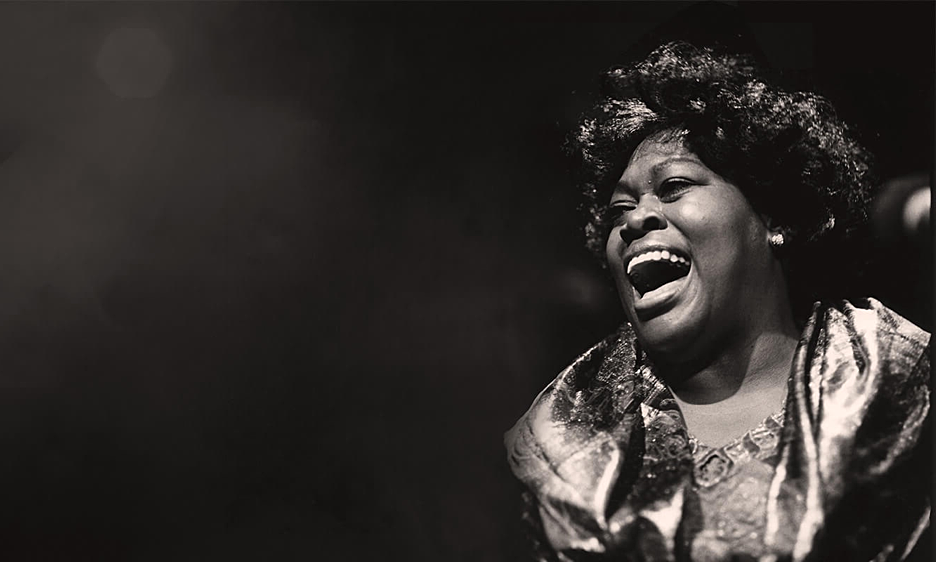 SOURCE: ALL ABOUT JAZZ
April 3, 2021
Sign in to view read count
Margie Evans, a legendary, international Blues and Gospel entertainer, songwriter, music producer, actress, music historian, community activist and motivational spokeswoman, who broke barriers for African American female Blues performers with poise, dignity and sophistication, died on March 19, 2021. In addition to her musicianship, Evans is noted as an activist for parity in music education as well as a promoter of the legacy of Blues music. As she often said, “I’ve been around a long time and I’ve really paid my dues.”

She was the age of eighty-one. A family statement did not reveal the cause of death.

The lengthy career of the unsung, effervescent entertainer is chronicled in her first biographical memoir, Margie Evans: The Classy, Sophisticated Queen of the Blues, due for release on Amazon in two weeks.

In all of her endeavors, Evans embodied African American women of courage, faith and wisdom who demanded respect. In each of her acting roles, radio commercials, iconic albums and international tours, she represented complex, decisive women, articulating a profound grace, depth, perseverance and dignity in each of her performances.

Marjorie Ann Johnson was born in 1939 in Shreveport, Louisiana, in the United States. She chose to be known as Margie. Raised as a devout Christian, Margie Evans’ early exposure to music was through gospel, inspired by her mother, Mrs. Veva Williams, who taught Latin and piano. After graduating from Grambling College, majoring in elementary education, in 1958, Margie moved to Los Angeles, where she later married her longtime friend and neighbor, Rev. Jim Evans. Always very intelligent, well read, talented and articulate, she gained the position of a background vocalist with Billy Ward, with whom she sang between 1958 and 1964, before joining the Ron Marshall Orchestra between 1964 and 1969, singing in Monterey, California. She then successfully auditioned to join the Johnny Otis Band. During her four-year stay there, she performed on The Johnny Otis Show Live at Monterey and Cuttin' Up albums. In addition to her recording and performing duties, Margie used her powerfully positive influence to help set up the Southern California Blues Society to help promote the art form through education and sponsorship.

Evans then commenced her solo career in 1973, and found almost immediate chart success. Her single track “Good Feeling" (United Artists 246) entered the R&B chart on June 30, 1973 for four weeks, reaching number 55. However, it was another four years before her single, “Good Thing Queen- Part 1" (ICA 002) entered the same chart listing on July 9, 1977 for eight weeks, peaking at number 47. Also, in 1975, Margie supplied the background vocals on Donald Byrd’s album, Stepping into Tomorrow. Those who knew her knew that Margie Evans heard God’s call at an early age and represented godliness and clean living in all of her performances and international tours. She was always jovial, effervescent and full of life. When resting or preparing for a performance, she could often be heard praising God, praying and singing Gospel hymns in her hotel room and dressing room.

Ever moving forward, in 1980, Margie performed at the San Francisco Blues Festival and the Long Beach Blues Festival, repeating the feat at the latter a year later. During her international touring, she took part in the American Folk Blues Festivals, sponsored by L+R Records in 1981, 1982 and 1985. As the momentum continued, in 1983, Evans was granted the Keepin' the Blues Alive Award by the Blues Foundation at the historic Peabody Hotel in Memphis, Tennessee.

Performing into the early 1990’s, Margie Evans toured the United States, Canada, Australia, Asia and Europe, in addition to participating in the DuMaurier Jazz Festival as well as appearing with Jay McShann at the Toronto Jazz Festival. Motivated by her own reality that “A prophet is honored everywhere except in his own hometown,” an adage from Mark 6:4, also noted in Luke 4:24, in the same decade, Margie then embarked upon her solution through community service, with her daughter Vicki Evans by her side, by helping to organize the 5-4 Optimist Club for local school children from the South Central Los Angeles district, where she became the first African American female President of the auspicious chapter.

In reflection of current events in the mid-1990’s, Margie decided to try to recapture an earlier era when the races mixed more easily at various venues, brought together, momentarily at least, by a shared passion for music. Once again, assisted by her daughter, a retired bilingual mentor educator, she decided to launch “Los Angeles Music Week,” a nearly two decades long non-profit annual celebration of locally based musicians in performances ranging from soul to salsa, blues to bolero, bebop to hip-hop. “Music can bring every race together on the face of this Earth,” said Evans, who once sang with a Latino band in Monterey Park. “All of the greatest messages of the world are spoken through music,” Margie shared in the interview for the L.A. Times article, “Instrument for Unity: Singer’s ‘LA Music Week Seeks to Bridge Racial Gaps” by Edward J. Boyer. Created in 1994, Los Angeles Music Week, Incorporated was a non-profit 501(c)3, community- based outreach program, with sixteen years of dedicated community service, founded by Director Margie Evans, assisted by President Vicki Evans. Los Angeles Music Week honored the various contributions of local landmark artists of all genres and worked exhaustively with the L.A. City Councilmembers, as well as the L.A. County Supervisors, to provide equitable access to music education for children. LAMW shared with students the history of music in Los Angeles and the part it plays in shaping music internationally. Numerous musical legends and educational contributors were honored by Los Angeles Music Week, including but not limited to Ray Charles, Joe Harnell, Charles Veal, Peggy Lee, Lalo Schifrin, Benny Carter, Cliffie Stone, Jester Hairston, Mehli Mehta, Buddy Collette, Lalo Guerrero, Dr. O.C. Smith, Tito Guitar, Clora Bryant, Hadda Brooks, Kenny Burrell, Bubba Jackson, Steve Allen, Laurindo Almeida, Ray Evans and Jay Livingston. Students at various schools received donated instruments, music tutelage and live musician seminars. Musicians, conductors, composers, songwriters, music educators and arrangers received televised City Council honoree celebrations, live publicity and networking opportunities with both legendary as well as new artists. Therefore, Los Angeles Music Week has proven to be an Instrument of Unity, building bridges to all of the diverse citizenry across all ages, ethnicities and backgrounds.

After her successful 1996 album, Drowning in the Sea of Love, Margie’s latest recording, a collaborative CD and DVD, Unplugged was recorded in 2016 with her dear friend, Swiss Blues singer, Philipp Fankhauser, with whom she also recorded other albums, Thun- San Francisco and The Checkerboard Blues Band: Blues for the Lady in 1989, 1994 respectively. In 2015 and 2016, Evans returned to the stage, guesting with Fankhauser in front of sold out venues throughout Switzerland.

In her long and extraordinary career spanning six decades, Margie Evans has not only succeeded as a well-renowned performer, producer, songwriter, motivational speaker and actress, she has also shaped the course of history in her community activism, music advocacy, her classy representation of women in the Blues and in her fight for Traditional Blues to be properly categorized by NARAS in their music awards programs. She started recording in the late 1960s and was still planning to record before her homegoing.

Her extensive discography, representative of her classic, inimitable Gospel-flavored soul vocals is well noted in her Wikipedia article. As Margie would often say to those she met, “I’m somebody special, Google me. Know your history.”

The filmography of the Margie Evans includes performances with Glendale Light Opera in Showboat, playing “Queenie,” an influential role, the role of “Annie” in Daddy Goodness, a Los Angeles-based Roquemore Productions theater performance, along with numerous films, such as Flap Jack Floozie with Teri Garr and From Here to Maternity, both Tom Schiller Productions, Legends of Rhythm and Blues for the BBC London, Tribute to Duke Ellington for United Artists, numerous television roles, as well as commercials and radio performances.

The details of the virtual memorial service for Margie Evans will be announced at a later date. Donations can be made in honor of Margie Evans to the Blues Foundation and radio station K-Jazz 88.1 FM, America’s Jazz and Blues Station at kkjz.org.

As Margie said, reflecting on the news of recent COVID deaths, “People of faith in Christ know that we do not die. When it’s my turn to go home, I will be more alive than I am right now. I will just have changed my address. I will be in the presence of God Almighty.”

Although she is famous for singing the Blues and representing her artistry with poise, dignity and classy sophistication, with well articulated diction unlike the typical female blues singer, in her later years, Margie became a faithful messenger of the Gospel. She sang and spoke about Jesus, sharing in song, The Time for Christ is Now,” Stop and Forgive,” “Jesus Loves Me,” “Amazing Grace” and “It is Well with My Soul” on stage and in local churches. She sang hymns to people who were ill, discouraged, sad or struggling with life’s issues, always encouraging and sharing words of peace, joy, love and wisdom. As many will attest, her life represented the adage, “Live, Laugh, Love.”

Margie was always determined to make the most of every opportunity. Her dynamic musical legacy continues to uplift the masses and encourage others to live wisely and make a positive difference in everything you choose to do. She is fondly remembered and cherished by everyone who loved her, knew her and who enjoys her amazing music. She will live on in our hearts forever.