I am thrilled with the programming line-up for this season--there will be such a variety of styles of improvised music and I am happy to be able to showcase so many fine Canadian musicians along with top-notch players from New York as well as Europe.
—John Geggie 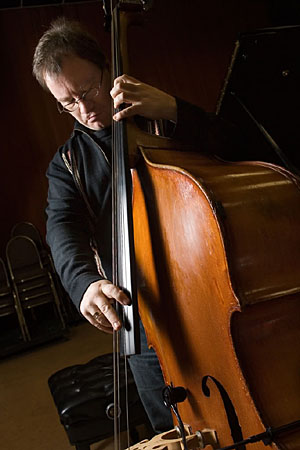 slideshow
The National Arts Centre is pleased to announce the Fourth Stage 10th season with the return of the critically acclaimed Geggie Series. The first concert of the season will be presented in collaboration with the Embassy of France and the Alliance Franaise on Saturday, September 26, 2009 at 8pm. The concert will have a transatlantic flavour with the presence of French saxophonist Jean-Marc Padovani, pianist Marianne Trudel and drummer/percussionist Aldo Mazza, both from Montreal. Explains John Geggie 'I am thrilled with the programming line-up for this season--there will be such a variety of styles of improvised music and I am happy to be able to showcase so many fine Canadian musicians along with top-notch players from New York as well as Europe.'

Also new this year and to celebrate its tenth anniversary, the Fourth Stage is offering flexible subscription packages that let you create your own season! Subscribe to one or more series or go “Fourth Stage a la carte"—mix and match any 4 or more performances from the Fourth Stage 2009–10 season—and you'll enjoy discounted ticket prices and NAC subscriber benefits. Subscribe online at-—it's fast, free, and easy!

John Geggie has secured for himself a position in the Canadian and international jazz scene as a versatile musician and creative composer. This fall, he will be celebrating the release of two new CDs of his own compositions. He has also recorded or performed with a veritable who's who of creative improvised music: Edward Simon, Seamus Blake, Donny McCaslin, Jon Christensen, Andy Milne, Ben Monder, George Colligan, Craig Taborn, Sheila Jordan, David Murray, Andrew Cyrille, Matt Brubeck, Ted Nash, Billy Hart, Vic Juris, Marilyn Crispell, {{Myra Melford. Bill Carrothers, Cuong Vu and bassist Mark Dresser. He has for many years hosted the Late Night Jam Sessions at the Ottawa International Jazz Festival. Previously, he has performed at various international festivals including in Rouen and Maubeuge (France), in Molde (Norway) and throughout the United States. Most recently, he performed extensively in the Ottawa International Chamber Music Festival and the Guelph Jazz Festival.

His performances are regularly heard on broadcasts by the CBC and SRC. In addition, he continues to maintain a busy concert schedule with the 13 Strings Chamber Ensemble and is involved in many recording projects. John is on faculty at the Crane School of Music, State University of New York (SUNY Potsdam) and has students at both Carleton University as well as University of Ottawa.

Since his formal training in Marseilles, composer and arranger, Jean-Marc Padovani, has made many recordings including Nimeno, with a septet featuring Italian trumpet player Enrico Rava. Jean-Marc Padovani also works in the field of theatre and film. For several years, he created numerous musicals in collaboration with writer Enzo Cormann, as part of their company “la Grande Ritournelle". The jazz quartet has always been an important part of his creative output; his meeting with Paul Motian in 1996 resulted in a tour of France and the recording Takiya! Tokaya! In 2006, he reunited with guitarist and composer Claude Barthelemy and formed a new quartet “Distances" with Olivier Sens and Pierre Dayraud. In early 2009, Padovani created Liqaa, a subtle mix of Arabic-Andalusian music and jazz. Upcoming this fall, his latest work Sketches will be recorded and he will begin a collaboration with the “Orquestra de Cambra de l'Emporda" directed by Carlos Coll and with the baroque singer Marie Cubaynes.

Recipient of the Prix Etoiles Galaxie de Radio-Canada (2007) for the best composition played at the Montreal Jazz Festival, pianist and composer Marianne Trudel has played in Canada, United States and France in various settings, including solo piano recitals, trios, quintet and large ensemble for which she writes and arrange all of the music. She has published 3 recordings under her name:" L'embarquee, Duo Trudel-Bourbonnais", “Sands of Time, Marianne Trudel Quintet live" and “Espaces libres, solo piano".

Her strong and eclectic musical background shows her multiple interests in the infinite phenomenon of music. She has shared the stage with, among others, Charles Aznavour, Chucho Valdes, Evan Parker, Mark Dresser, Kenny Wheeler, Muhal Richard Abrams. Her previous studies have included a Master in Ethnomusicology (Universite de Montreal), a Bachelor in Jazz Performance (McGill University), and numerous workshops in North America and Europe.

Member of internationally acclaimed percussion quartet, Repercussion, for over 25 years, Aldo has gone around the world twice with his ensemble, recorded five CDs and performed over 2, 500 concerts and television appearances. Aldo has appeared on over 100 CDs and sound tracks and recorded with such well-known artists as Celine Dion, Jon Bon Jovi, Alain Caron and Aldo Nova. He has performed live with such artists as James Brown, Chris De Burgh, and Oliver Jones and with symphony orchestras. Artistic director and founder of the KoSA International Percussion Workshops & Festival for the past eight years (USA & CUBA), Aldo is also an active clinician for many percussion companies, including Sabian cymbals, Ludwig Drums, and Latin Percussion (LP) to name a few. He is presently, instructor of Percussion at KoSA Academy, McGill Conservatory of Music in Montreal as at the Jazzworks Canada jazz camp at CAMMAC.

UPCOMING CONCERTS IN THIS SERIES

The next concert in this series takes place on October 31, 2009: it will be a celebration of the release of the CD Geggie Project (Ambiance Magnetique) and will feature Marilyn Crispell--piano and Nick Fraser--drums. On November 27, 2009, Geggie is pleased to present an evening of mainstream jazz featuring the New York-based guitarist Paul Meyers, joined by Josh Rager (Montreal) on piano. To mark the release of his second CD, Across the Sky (Plunge Records), John will be joined on January 30, 2010 by saxophonist Donny McCaslin from New York, pianist Nancy Walker and drummer Nick Fraser. The concert of March 6, 2010 will feature modern and contemporary jazz by four adventurous horn players, Lina Allemano on trumpet (Toronto), Remi Bolduc on alto sax (Montreal), Bret Zvacek (USA) on trombone and Chet Doxas on tenor sax (Montreal). Playing drums on this concert will be Montreal-based Isaiah Ceccarelli. The evening of April 17, 2010, will be filled with lyrical and impressionistic improvisation featuring New York pianist Frank Kimbrough and Jean Martin on drums (Toronto). The final concert, on May 15, 2010, will showcase creative contemporary jazz and original compositions played by young Canadians on the New York jazz scene--Michael Webster (tenor sax), Erica vonKleist (alto sax and flute) and Greg Ritchie (drums).

All performances are at the Fourth Stage and begin at 8 p.m.