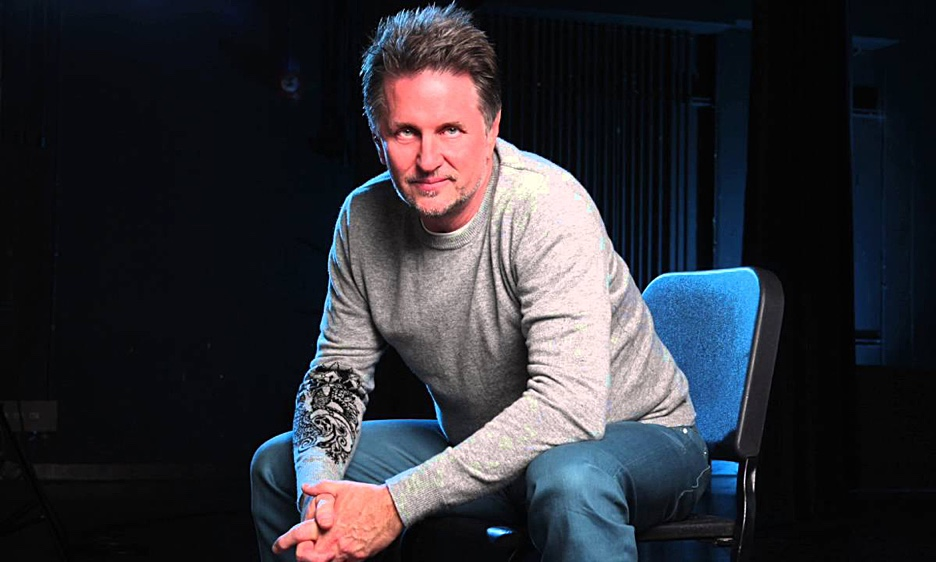 Multiple Grammy/Emmy Award winning composer/arranger Gordon Goodwin has added actor to his storied resume with a spirited cameo as “Mr. Hughes,” the lead judge presiding over the California Battle of the Bands in the jazz-driven period piece, 'Knights of Swing,’ a late 40s era coming-of-age journey that follows the challenges,disappointments and successes of six high school boys, and the girls who join them to form a really swingin’ big band.

Goodwin relished the opportunity, “I have worked in film for many years, but always on the score in post-production, never in front of the camera. But this role was an easy fit forme. I really knew Mr. Hughes, and could also relate to those high school kids who had a dream of forming a big band. That was me when I was their age!”

Directed by Emilio Palame and David Gutel, and powered by an incredible cast and crew of dreamers and believers, Knights of Swing is available exclusively via Vimeo on Demand.

Throughout California, Goodwin is an in-demand live act with regular stints at Yoshi’s in San Francisco and iconic LA jazz clubs, Catalina’s and Herb Alpert’s Vibrato, and this summer, he’s taking part in the inaugural Hollywood Bowl Jazz Festival, a rebranding from the Playboy Jazz Fest which ran for 40 years. Performing at the Bowl for the fourth time, Goodwin, with his 18-pc Big Phat Band, will play an early evening set on Sunday, June 26. Other acts on the 2-day lineup include Tower of Power, Terri Lyne Carrington + Social Science, Femi Kuti & The Positive Force, Chief Adjuah (formerly Christian Scott), Cory Wong, Veronica Swift, Fantastic Negrito, and headline sets by The Roots and Gregory Porter. Tix are available now.

During the festival set, Goodwin will showcase music from throughout his 5-decade career including music from his most recent release, “The Reset,” a bristling, and topical, 5-song fusion excursion that addresses current world events while also paying tribute to the late great Sammy Nestico (longtime arranger for the Count Basie Orchestra who passed away last year at the age of 96) and rekindling the David Foster-penned classic “Through the Fire,” with a gorgeous vocal by Vangie Gunn.

Born in Wichita, Kansas, Goodwin’s parents moved to Southern California when Goodwin was four. After completing his formal music education at Cal State University- Northridge, Gordon began working at Disneyland in the theme park’s band and after a few years he was commissioned to work on a musical that featured past and present Mouseketeers (including Britney Spears and Christina Aguilera). Upon hearing his music, the master drummer and bandleader Louie Bellson recruited Goodwin to join his band. That exposure led to studio work with the likes of Quincy Jones, Mel Torme, Ray Charles and legendary vocalist Johnny Mathis.

In 1999, Gordon founded the Big Phat Band for what he thought would be a single performance at his alma mater Cal State at Northridge. Since then, the Big Phat Band has recorded 10 albums, and in the process received 21 Grammy nominations. Goodwin won a Grammy for ‘Best Instrumental Arrangement’ for “Incredits” for the film The Incredibles and has been honored with 3 Emmy awards for his work on the Steven Spielberg-produced shows ”Animaniacs' and 'Pinky and the Brain.' His work has been featured/utilized in more than 80 film & TV productions spanning the gamut of pop culture, amplifying the likes of National Treasure, Star Trek: Nemesis, Snakes on a Plane, Get Smart, Remember the Titans, The Sorcerer’s Apprentice, The Majestic (starring Jim Carrey), The Lion King, and Ratatouille.

Goodwin’s most recent full-length album, 'The Gordian Knot,' is a nod to the Greek mythology of a knot impossible to undo. Highlights from the collection include “Kneel Before Zod” a song about the super villain who destroyed Superman’s home planet, Krypton, “T.O.P. Adjacent,” a blazing tribute to Tower of Power, “Sunset and Vine,” a 6- minute stroll thru the looking mirror of the legendary Hollywood intersection, a re-make of “The Incredibles,” a tribute to famed drummer Buddy Rich called “The Buddy Complex,” and a sultry, sophisticated rendition of “Summertime,” a take on the aria composed by George Gershwin for the 1935 opera, 'Porgy and Bess,' with vocals, once again, by the esteemed Gunn.

Up next is a commissioned piece for The Boston Pops, whom Goodwin first played with in 1986, accompanying on grand piano while John Williams conducted and Johnny Mathis and Natalie Cole performed a tribute to her father. The new work is for an upcoming program.

Tying it all together, he’s also the host of the popular long-running radio program, “Phat Tracks with Gordon Goodwin,” airing for 5 years on KJazz, America’s jazz and blues station, and beginning this year, broadcasting and streaming from its new home on San Diego’s Jazz 88.3 FM (KSDS), the weekly 2-hour show is a mix of music and stories and commentary.

“Hosting Phat Tracks has been invigorating for me. I love to spread the word about exciting young artists, as well as engage in discussion about the value of this music and what it brings to the human condition. My goal is to break down barriers between musical genres and enhance people’s understanding and appreciation of this important art form,” said Goodwin.

Phat Tracks with Gordon Goodwin can be heard every Saturday afternoon from 1-3PM PDT on Jazz 88.3 FM in San Diego or at jazz88.us

“I was immediately taken by Gordon’s contemporary musical viewpoint, the dynamics of his “Big Phat Band,” its bevy of superb soloists, and the exhilaration of its sound.” —Quincy Jones

Gordon Goodwin · You Are My Sunshine (ft. Ray Charles)