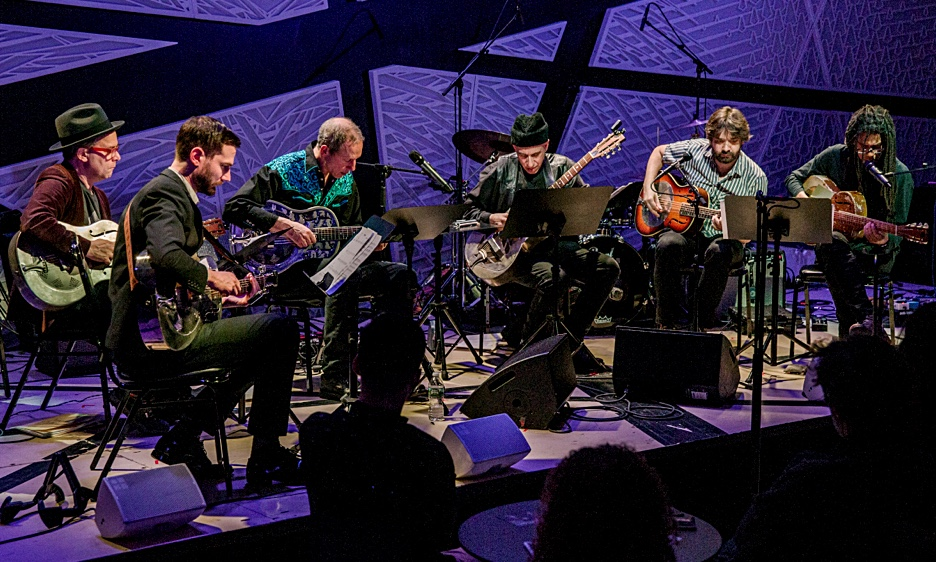 SOURCE: THE MUSIC OUTPOST PUBLICITY
March 15, 2021
Sign in to view read count
On March 20th and 21st, the Alternative Guitar Summit presents its annual two-day music festival, part of the NYC-based Summit's month-long celebration of innovative guitar music. Unlike years past, the 2021 Alt Guitar Summit Festival will be held online and thus accessible to global audiences despite the Covid 19 pandemic. And to accommodate all music lovers during a time of financial hardship for many, tickets for the 2021 Festival are “Pay What You Wish;" doors are open, and donations encouraged if possible. Never before has a feast of innovative guitar music been this accessible. And never before has any music festival presented such an extensive and impressive line-up of guitarists: nearly two dozen of the most renowned guitarists on the contemporary scene, with an evening featuring duos performing Pat Martino's music, and the day following devoted to guitar mavericks performing their own work.

The afternoon of March 21st is devoted to and will feature Nguyen Le, Nels Cline, Michael Gregory Jackson, Wolfgang Muthspiel, Mary Halvorson with Tomas Fujiwara, Henry Kaiser, and Anthony Pirog, videotaped from their homes to yours. Hosted by Joel Harrison and writer Michael Ross. “Pay What You Wish;" donations go towards production costs. Several of the guitar innovators performing at the “Virtual Visionary Solos" event are also featured in a new book by Joel Harrison called Guitar Talk: Conversations with Visionary Players, coming out on Terra Nova Press in mid-April 2021.

so that everyone, everywhere can attend this sumptuous, unprecedented alt-guitar feast! And while registration is “Pay What You Wish," we encourage you to donate what you can afford. (To accommodate all time zones, videos of all of the Festival events will be available for 48 hours after the last performance.)

There are a handful of guitarists that have changed the way we think about the instrument over the past five or six decades. Many names such as Jim Hall, Wes Montgomery, and Joe Pass are no longer with us. Pat Martino, very much still alive, is one of those icons.

Born in 1944, Pat’s story is the stuff of fiction. Showing incredible determination and love of the jazz art form from an early age, by fifteen years old he was touring the country with all Black bands. This was the early 1960’s, and it’s said that when a tire blew in the band’s vehicle, the band had to send Pat into the segregated southern towns to get it fixed. Embraced by the music’s founding fathers he grew up fast. In his late teens he lived in Harlem where he played all night in smoking bands that are now the stuff of legend. His virtuosic, swinging lines were fully formed by age eighteen and a string of records, such as El Hombre, Consciousness, and Timeless, followed through the '70s and became benchmarks for any aspirant. The range of these recordings is remarkable. We see influences from Indian music, funk and R&B, classical, folk, and more. All of it is framed by Pat’s deep immersion in the roots and culture of jazz.

In 1980 Pat had a brain aneurysm that almost killed him. A last minute operation saved his life, but his entire memory was gone. Having no idea who his parents were, much less how to play the guitar, he languished. And yet as if by supernatural will power he taught himself to play again and by the '90s had returned to the stage in full form. Numerous records have followed full of his gorgeous compositions and hallmark soloing. Pat Martino is more than a musician. His speaking and writing demonstrate a wholly unique approach to life, one imbued by spirit and hard-won wisdom.

The Alternative Guitar Summit celebrates living composer/ players every year. Despite the pandemic we are forging ahead with a once in a lifetime aggregation of guitarists who will honor Pat by playing his compositions. five sets of guitar duos will play one piece by themselves and one with a rhythm section. Many know Martino the soloist. Fewer know the depth of his compositions. We hope to highlight his writing.

This live-in-the-studio performance is being recorded for eventual release on Highnote Records. The performances are FREE! However, we hope that attendees will donate not just towards the costs of production, but more importantly towards the fund set up to assist Pat Martino. Help us celebrate this extraordinary life.

This story appears courtesy of The Music Outpost Publicity.
Copyright © 2021. All rights reserved.