SOURCE: ALL ABOUT JAZZ
November 6, 2016
Sign in to view read count 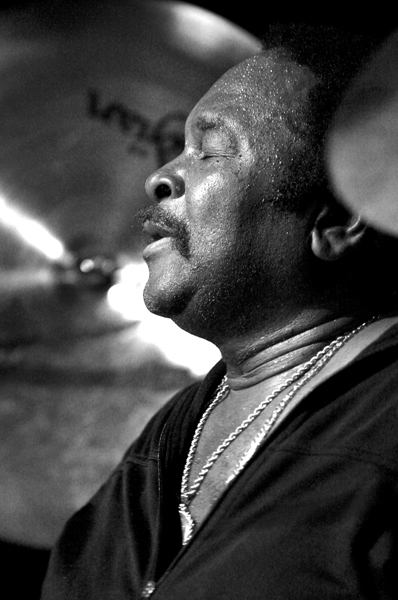 These are not words I ever thought I would have to write. Legendary drummer Alphonse Mouzon was diagnosed with a rare form of cancer in September. He had to immediately undergo surgery which has bought him some time. But his kidneys are too weak for radiation therapy and he is planning to go to Mexico for an alternative treatment program. Given the cost of this course of therapy, he has set up a Go Fund Me page so that his legion of friends and fans can help. Time is of the essence so people please do what you can to help this inspiring musician keep doing what he loves for years to come.

I, along with millions of other fans, first heard Alphonse Mouzon when he joined Wayne Shorter, Joe Zawinul and Miroslav Vitous as an original member of Weather Report, the most successful of the fusion jazz bands to emerge from Miles Davis' late 60s musical evolution.

Mouzon's high energy drumming propelled the band until he left to join McCoy Tyner's quintet in 1972. Along with the fire breathing sax master, Sonny Fortune, Mouzon and bassist Calvin Hill performed on several memorable recordings including Sahara and Song For My Lady. In late 1973, a 20 year old Azar Lawrence replaced Fortune, (who left to join Miles Davis), in time to tour Europe with Tyner, Mouzon and Juini Booth where they recorded the classic live album, Enlightenment.

Mouzon would go on, with Larry Coryell and Randy Brecker, to form another formidable jazz fusion group, the Eleventh House. But first, Mouzon signed with Blue Note Records in 1973 and recorded Funky Snakefoot, which triggered his highly successful career as a band leader.

Zoom ahead nearly four decades later to the fall of 2013 when Mouzon reunited with old friend Azar Lawrence, along with veterans of the jazz scene, pianist Theo Saunders and bassist Henry “The Skipper" Franklin, for an unforgettable 10 month gig at the RG Club in Venice, California. It was here that I not only met but was blessed to become friends with Alphonse, (even occasionally helping him set up and break down his drum kit).

During those ten months I regularly found myself sitting transfixed, jaw open and involuntarily tappin' my feet and boppin' my head to the frenzied beat. This monster band, which performed together as recently as 2 months ago at the Los Angeles County Museum of Art (likely just before Alphonse received this devastating rare cancer diagnosis), always sounded like a rumbling, steaming train, relentlessly roaring forward with modal madness. Azar Lawrence's band requires nuclear power to drive it, and that is exactly what Mouzon provided. Of course, when Lawrence, the fearless leader, called out a ballad, Mouzon just as easily picked up his brushes and deftly beat out a sensitive and swinging rhythm.

I also discovered, over the course of that unforgettable gig, that not only was Alphonse one of the greatest musicians to ever sit down behind a drum kit, but he was also a funny, passionate and incredibly generous human being who needs your help.