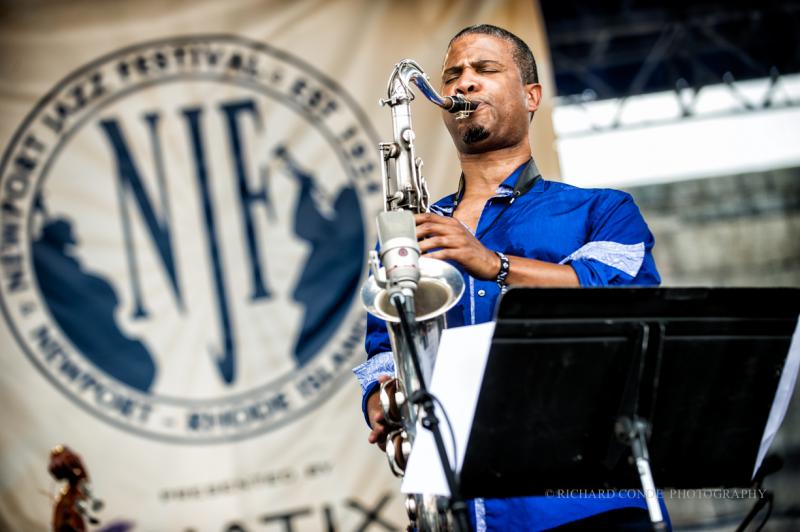 From the first crushing strike against the drums, Brian Blade's heavy hand and swirling rolls captivated the audience attending a rainy installment of the Newport Jazz Festival. Blade led his Fellowship Band through "Stoner Hill," a dour, gray opener that mirrored the ambiance at one of the soggiest days the outdoor festival is likely to have ever experienced. While the wet weather initially seemed to have spirits down, the raucous applause at the end of the piece left no doubt that the crowd's enthusiasm for the music was alive and well.

"Landmarks" began as a trio format, where Blade used brushes and a lighter touch. It wasn't long, however, before one of the nastiest wrists in jazz returned with its pop and boom, kicking up the tempo and infusing swing.

An army of umbrellas stood should-to-shoulder along the perimeter of the seating area. The pitter-patter of rain on umbrellas formed a rhythmic pattern in the wide open spaces of the moving and expressive "Ark-L9-Tex." To the audience's amusement, Blade closed on "Let The Light Shine Again."

The sun did shine briefly, for little more than an hour. Throughout most of the day, crowds huddled together, desperately seeking shelter from the pelting rain. They tried just about every means: raincoats, ponchos, tarps, and makeshift garbage bags were all spotted on the sprawling grounds surrounding the main stage. There were even a few folks who appeared to have abandoned all hope of remaining dry, and simply walked through the muck barefoot.

The glossy, water-like sounds of Warren Wolf's vibraphone sparkled on "Armageddon," as the San Francisco Jazz Collective took the stage. The band stormed on an upbeat tempo, led by a jerking bass line. Trumpet and tenor sax played the melody in unison, when Miguel Zenon advanced for the first solo. Working for several bars, he included a flurry of notes that sparked riffs from the other horn players. Zenon twisted and corked his body as he worked his way through the solo. Moving toward the instrument's upper end, he teed up a long, high, piercing note that yielded to Wolf's vibraphone solo. As Wolf finished, the band resumed the main melody, rephrasing it to varying rhythmic timings, slower, and slower, ending on a note that brought the audience alive.

"Playing with the San Francisco Jazz Collective is a lot fun because I think the Collective is made up of some of the best names in jazz," Warren Wolf said. "Typically, each year the Collective selects one artist, and each member chooses one of that artist's compositions and arranges it. We're allowed to do whatever we want —to take it as far out as we want —so this has been really great."

The set continued with the slower paced "Frosted Evils," Kevin Eubanks' "More Than Meets the Ear," and a stirring rendition of Horace Silver's "Songs For My Father."

"Playing at Newport's 60th anniversary is a special experience," Wolf said. "The only thing I could have asked for was better weather," he added with a laugh. "It still looks like a great audience from what I can see," he noted with a nod toward the crowd.

In October, the Jazz Collective will work on the music of Joe Henderson. Wolf will hit the road with the Collective, and then in December, he performs with bassist Christian McBride at the Village Vanguard.

Pianist Aaron Goldberg walked a lyrical line at the beginning of Kurt Rosenwinkel's "Our Secret World." Luminous notes churned from Rosenwinkel's guitar; a sprinkling of electronic effects caused swells of tones to wobble and spray.

"Kurt is a musician I was aware of since I first started playing jazz back when I was in high school," Goldberg said. "I think that since the early '90s I was sort of aware of him."

"I always recognized Kurt as a unique and interesting voice," Goldberg continued. "I think the first time I heard him was when he was with Gary Burton. I've long admired Kurt and when I first started to play with him, he knew of me mostly because I played with Joshua Redman."

"When he asked me to join the band, I felt it was a challenge and a real honor. His music requires a great deal of flexibility to handle appropriately."

"Brooklyn Sometimes," the second piece from the performance, allotted Goldberg time to stretch out on the ivories.

"It always moves me to play that tune," Goldberg said. "I remember looking out at the wet crowd and thinking 'I have a great job!'" he recalled with a laugh.

Goldberg, who grew up in the Boston area, has attended the Newport Jazz Festival numerous times. "I remember my ultimate rainy Newport experience," Goldberg affirmed, "complete with thunder and lightning!" Continuing, he explained: "There was a Miles Davis tribute that I really wanted to see. Herbie Hancock was there, and during all this rain with the thunder and lighting, Herbie's sheet music blew right off the stage, and he just kept on playing! It seemed like there were only a few hundred people left at the end, and when it was over, we applauded and cheered as loud as we could."

The set also consisted of "A Shifting Design," which provided drummer Kendrick Scott some moments to shine (despite all the rain), the mellow "Heavenly Bodies," and "Zhivago."

"I think "Heavenly Bodies" is the one that really moved the crowd," Goldberg said.

Noting that the weather was less than ideal, he elaborated: "You can always count on Kurt to power through any set of circumstances and bring the music to a climactic situation that takes the people on a journey. It's a matter of immersion in the moment. This [performance] is a case where it wasn't a perfect situation, but [Kurt] rose to the occasion, just like I think he always does."

Another performer who rose to the occasion may well have been Wynton Marsalis, who performed with the 14-piece Lincoln Center Orchestra. Drawing upon melodic themes from jazz, the charts were rearranged for the orchestra. These orchestral interpretations, interspersed with solos from the jazz idiom, created music that was modern in nature, yet still retained elements of classic Orleans.

The audience danced to an adaptation of Horace Silver's "Cape Verdean Blues," which was followed by Count Basie's "I left My Baby."

Bassist Carlos Henriquez's arrangement of "Take Five" began with punchy sounds as a wall of horns floated through a reinterpretation of the melody made famous on Paul Desmond's alto saxophone. Notes blended, melted, and swayed, on a piece that saw Elliot Mason's tarnished trombone cry out with soulful emotion.

"The first jazz musician I ever listened to was John Coltrane," Marsalis explained to the audience. Subsequently, he performed "Resolution" the second movement in the Coltrane's masterful work "A Love Supreme." The set concluded on Duke Ellington's noted "Black, Brown & Beige: Movement III, Symphonette."

The 60th anniversary of the Newport Jazz Festival presented by Natixis Global Asset Management is sure to be an anniversary that is long remembered. Dick Hyman, Howard Alden, and Jay Leonhart provided a classy trio performance. During Robert Glasper's electronic induced set and Gregory Porter's danceable grooves, the festival's shade tent became a haven for those looking to escape the liquid sunshine. Dave Holland's Prism kicked off an eclectic set, while those who were bold enough to stick around could hear the Newport Now 60 Band, or party with Trombone Shorty. Sure, there was a constant, nagging rain that provided ugly accompaniments on multiple sets. But, there were also numerous times that the tired looks on the faces of more than 6,000 patrons quickly turned to smiles and cheers. Let there be no doubt: the 60th anniversary of the Newport Jazz Festival was about the enduring spirit of the music and the perseverance of its impassioned audience.