In the Pacific Northwest, where she built her career, Greta Matassa wins wide acclaim; 7 times, the readers of Earshot, the Seattle jazz magazine, have voted her the best jazz vocalist in the Northwest. She was inducted into the Seattle Jazz Hall of Fame in 2014. Jim Wilke, the Seattle jazz maven and host of the syndicated “Jazz After Hours” radio program, praises her versatility. “She has a fearlessness in approaching material,” Wilke says, “that makes her like an instrumentalist in a jam session.” Bassist and producer John Clayton says “One of the best jazz singers we have to boast about these days.”

Her 40 year career has been a whirlwind of exciting opportunities and experiences. Over the last 20 years she became established as one of the greatest jazz singers of her time. Working with top jazz musicians in Los Angeles, Chicago and New York. In 2016 She was featured with bassist John Clayton’s group in a centennial tribute to Ella Fitzgerald. She has recorded 11 CD’S and travels extensively teaching and performing.

Her decision to start teaching was probably her greatest contribution to the future of the genre she loves so much. For the last 20 years Greta has become one of the most unique and respected educators in the field today. Offering individual lessons and mentorships as well as establishing loyal student bases from Seattle to Japan, From Alaska to Kauai, from Chicago to New York.

Matassa's fascination with songs began early. Her family moved frequently when she was small, but by the time she entered middle school, they had settled on Bainbridge Island in Puget Sound, opposite Seattle. This is what she said about her childhood:

“Growing up, my parents were big jazz fans and we had a lot of jazz music around the house. They were happy to encourage my interest in music. My father is a visual artist, and we used to spend hours talking about abstract expressionism and how that related to jazz.”

Although she took only a few voice lessons, she found more to be gained from directly working with the recordings of classic jazz singers from Ella to Ray Charles. “My method for learning to sing was quite simple and straight-forward, I sang along with the great jazz singers I loved so much and let them teach me everything I could learn ! I still do this every day.”

Greta began singing professionally while still in high school and as more opportunities developed, she quit school to go on the road. All through the 1980’s Greta sang in a wide variety of musical groups. From top-40 dance bands to an all original heavy metal group, she continued to explore her instrument. She was soon a featured guest artist on a cavalcade of Seattle area jazz musicians groups. At the same time she became, through her extreme versatility, a wildly successful session singer, doing voice-over for many of the areas most recognizable radio and television jingles.

She became even more diverse when in 1989 the Pacific Northwest Ballet asked Matassa to step in for Ernestine Anderson in a program based on the music of Kurt Weill. The show, in the Seattle Opera House, gave her wider exposure.

“The Weill show ran every two years for about ten years. It put me into the legit field and, eventually, led to Spectrum Dance Theater, which then got a grant and asked me to do a program with them. We debuted it in 1998. It was called ‘Voices of Jazz Danced,' a tribute to fifteen classic jazz singers.

Greta married and had two daughters in the early 90’s. She also released the first of her 11 records to date. Throughout the next decade Greta experimented with assembling a permanent group. After various combinations of some the northwests greatest jazz musicians she finally established her Quartet featuring Darin Clendenin piano, Clipper Anderson (whom she later married after divorce) and Mark Ivester drums. Later adding the amazing Saxophonist Alexey Nikolaev.

Now began a relationship with one of the top jazz clubs in the country. Tula’s restaurant and jazz club in the Belltown area of Seattle became a mainstay in the jazz scene. Greta was, and continues to be featured monthly.

For the next 20 years she began touring the US and abroad, establishing teaching bases and performing at jazz clubs, concerts and festivals.

Although it has been asked why she is not more internationally famous, She responds that she as made conscious musical choices that do not always guarantee fame and has always been more interested in the integrity of her music.

To that end she has become, over recent years, a member of a group of national and international jazz singers that actively share their resources with each other. Mostly women, these strategically placed singers (NYC, LA, Bay Area, Chicago, Kauai, Japan, Vancouver BC, Portland) help each other to travel, by sharing gigs, students and fan- bases on an entirely new organic level.

With the release of her newest CD “Portrait” on Origin Records, Greta is getting the kind of attention internationally that re-establishes her as one of the greatest living jazz singers.

Greta Matassa and Barney McClure at Bake's Place This Friday

Catching up with Greta Matassa

”The album (Portrait), closes with Billy Strayhorn's “Lush Life.” All members of the quintet support Matassa and one another in what could become known as a definitive vocal version of that masterpiece.” ——Rifftides “Boppish, snappy and conversational” —Downbeat ”One of the best jazz vocalists we have to boast about these days.” —John Clayton ”Greta Matasa is the consummate Jazz vocalist of modern times. Storytelling. Scat. Phrasing. Improvisation. Connection. A voice full of colours and textures with a strong sensibility in delivery.” Dee Daniels ”Worldly, gentle, bold, dynamic, Favorites From a Long Walk is a gift for the heart

”The album (Portrait), closes with Billy Strayhorn's “Lush Life.” All members of the quintet support Matassa and one another in what could become known as a definitive vocal version of that masterpiece.” ——Rifftides “Boppish, snappy and conversational” —Downbeat ”One of the best jazz vocalists we have to boast about these days.” —John Clayton ”Greta Matasa is the consummate Jazz vocalist of modern times. Storytelling. Scat. Phrasing. Improvisation. Connection. A voice full of colours and textures with a strong sensibility in delivery.” Dee Daniels ”Worldly, gentle, bold, dynamic, Favorites From a Long Walk is a gift for the heart. Greta Matassa is one of America's finest singers, and stands firmly among the best in today's jazz.” —Jazz Review ”Greta Matassa moves from triumph to triumph.” —Christopher Loudon, Jazz Times ”She can give Ms. Streisand a run for it! —Seattle Times ”Matassa is a Seattle treasure.” —Seattle Times ”Her scatting is as confident, nimble an energetic as Ella's and her phrasing is hip like Nancy Wilson's” —Earshot Jazz ”Echoing Rosie Clooney’s natural warmth and Nancy Wilson’s impeccable phrasing, Matassa moves from triumph to triumph” —Christopher Loudon, Jazz Times ”The thing that’s really impressive about her is her versatility. She has a fearlessness in approaching material that makes her like an instrumentalist in a jam session. At the same time she can croon a ballad that will break your heart.” —Jim Wilke, host of nationally syndicated Jazz After Hours on PRI ”Ella and Billie” is Matassa’s tour de force” —Roberta Penn, Seattle P-I ”Here Greta has captured the true essence of her gift, live performance.” Jazz Times calls the CD, “as cozy as a fireside brandy on a rainy Northwest night.” ”Her pitch, her phrasing, her ability to find the groove and swing it place her in the company of Ernestine Anderson and Dianne Schuur.” —Joseph Murphy, Earshot Jazz ”A vocal chameleon herself, Matassa can sound husky or crisp, ebullient or wailing, girlish or jaded. She recalls Billie Holiday in one phrase and Cleo Laine the next.” —Misha Berson, The Seattle Times ”There was Matassa herself, whose voice can ping-pong along the highest riffs and effortlessly belt down to the darkest whiskey tones.” —Mary Murfin Baily, The Seattle Times ”…She’s so light-hearted and humorous. Her musicianship is so meticulous. Her voice is so lovely. Her stylings are so precise and detailed.” —Joe Adcock, The Seattle Times ”Purists might argue there will never be another Ella or Billie. These cats have obviously never heard Greta Matassa!” —The Seattle Times ”Matassa is worth a sizable price of admission wherever and whenever she sings!” —Rick Nelson, The Tacoma News Tribune ”Greta Matassa is a powerful, distinctive vocalist. Seemingly limitless as to what jazz form she can master” —The Seattle Times

“Vocalist Greta Matassa can do Ella and get away with it! It’s not mimicry, it’s talent, and it’s only part of a much greater gift.” —The Seattle Times

“Greta Matassa is a consummate jazz singer who has it all, a great sound and sense of swing, convincing delivery of any lyric that she sings, and she always connects with her audiences. In addition, she's a terrific teacher who has mentored vocalists for years in her workshops and lessons. Hearing her always makes me smile.” —John Stowell

“Greta knows how to get deep into the heart of a song, with irresistible feeling and an ear for the sound of surprise.” —Tamir Hendelman

“Greta is amazing! She can sing a song and deliver the full range of emotion from sad to joyous, from delicate to strong...and is one of the most developed and imaginative improvisers I have ever heard. I have witnessed firsthand (actually, guitar in hand) the power of her creativity and the way she inspires others...go on Greta!!!” —Bruce Forman

“Rebecca Kilgore ”There are few vocalists who send chills up my spine, but Greta sure does. What a joy to accompany her; she makes me want to be a better musician.” Josh Nelson 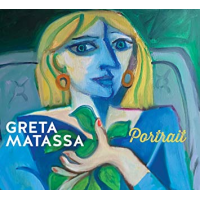 I Wanna Be Loved 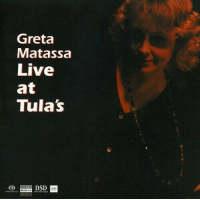 All This And Heaven...

Got A Song That I Sing

From: I Wanna Be Loved
By Greta Matassa

All About Jazz musician pages are maintained by musicians, publicists and trusted members like you. Interested? Tell us why you would like to improve the Greta Matassa musician page.