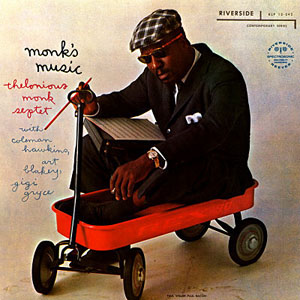 Many albums in the Original Jazz Classics reissue series include alternate takes or tracks recorded for, but ultimately not included on, the original vinyl LP. The label's 2011 Remasters edition of pianist Thelonious Monk's Monk's Music (Riverside, 1957) is no exception—but is something of a first, in that "Blues For Tomorrow," the 13:33 minute bonus track, does not include a single note from the leader.

The track was recorded on June 25, 1957, in the closing minutes of an otherwise unproductive session. Monk, unusually, arrived on time, but was distracted with worry about his wife, Nellie, who was in hospital. Drummer Art Blakey arrived an hour late and then had to assemble and mic up his kit. The band had difficulty following Monk's directions, leading Monk to exclaim to tenor saxophonists Coleman Hawkins and John Coltrane, "You're the great Coleman Hawkins, right? You're the guy who invented the tenor saxophone, right? Your'e the great John Coltrane, right? Well, the music is in the horn. Between the two of you, you should be able to find it." Eventually, towards the due end of the session, Monk threw in the towel and went home.

Producer Orrin Keepnews, desperate to salvage some releasable music from the date, asked the remaining sextet to record a blues, which was quickly put together by alto saxophonist Gigi Gryce. "Blues For Tomorrow" was not included on the original Monk's Music, and was first released on a Riverside various artists compilation. (The alternate takes of "Off Minor" and "Crepuscule With Nellie" have long been included on reissues of Monk's Music).

Happily, a second session on June 26 went resoundingly well, producing the other eight tracks which make up the Remasters disc—which also includes, in the 00:55 minute opener, "Abide With Me," a second Monkless item, this one arranged by Monk for the horns only, as a curtain-raiser to the album proper.

Monk's horns-rich arrangements, and the quality of the soloists to hand, has made Monk's Music a well-loved and important part of Monk's canon. Compositionally, however, it marked time. Putting aside its immediate predecessor, Thelonious Himself (Riverside, 1957), on which the mostly unaccompanied Monk focused on standards, it followed Brilliant Corners (Riverside, 1956), on which Monk led a quintet/septet on mostly freshly composed material. Most of the tunes on Monk's Music would have been familiar to the assembled musicians, who were thrown on June 25 by new and tricky arrangements and, very likely, by Monk's distracted mood.

Joe Tarantino's 24-bit remaster does Monk's Music proud, and it is appropriate to have "Blues For Tomorrow" on the same disc—even if there's no Monk.