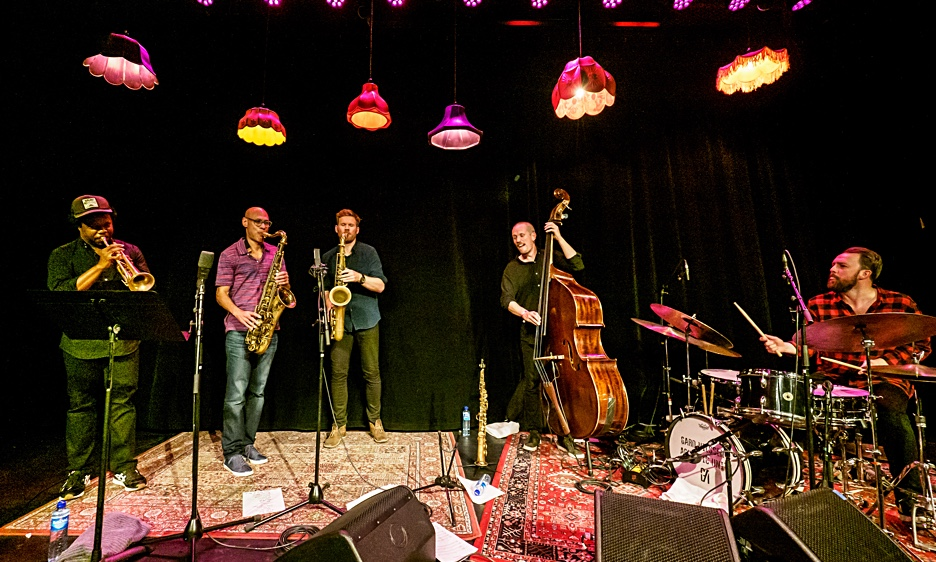 In the last few years, the Moldejazz festival's artists-in-residence have kept their appearances down to a manageable human count, with two or three concert manifestations apiece from Pat Metheny, Vijay Iyer and Maria Schneider. For the 2019 edition, that position was awarded to Norwegian drummer Gard Nilssen, whose strength lies in a rabid appetite for running, or being involved in, more bands than most mere mortals can imagine: for a run of varied platforms featuring different line-ups and musical directions, Nilssen was one of the wisest choices possible. His other strengths, of course, are in his exceptional playing ability (technique, spontaneity, sonic creativity, rhythm mastery), his conceptual imagination and his general good taste. Nilssen was given permission to bring in his bands, and proceeded to do so, on every single day of the festival.

In 2021, Moldejazz will celebrate its 60th birthday, so it's almost the longest-running European jazz festival. Molde lies in a fjord setting on the west coast of Norway, and most of its concerts take place at the Plassen cultural edifice, which houses the Storyville Jazz Club. This institution also has its roots in the 1960s, although it was only welcomed into its present home in 2012, when Plassen was completed.

On the first day, Nilssen presented an expanded sPacemoNkey, his duo with Morten Qvenild, joined by another keyboardist, Ståle Storløkken, and guitarist Stian Westerhus. Playing in a darkened Vårt theatre at Plassen, this was Nilssen in his doom-hued, starkly minimalist, gothic improvising, electro-shock state. The extreme absence of illumination forced attention onto the sudden, isolated sonic eruptions, quietness acting as a scene-setter for unexpected stuns. Black hole lighting shaped dark silhouettes, and an unholy bond was formed between all in the room, and in particular Nilssen and Westerhus, at one stage, trading blows of hardened extremity. Qvenild works with a later palette, emerging out of the 1980s electronic field, a lighter scrunch compared with the surrounding doom prog of his three colleagues.

Nilssen continued to unveil a different face each day, the next being Bushman's Revenge, this trio also benefiting from the addition of two guest players, the Swedish saxophonist Per 'Texas' Johanssen, and the ubiquitous Norwegian keyboardist Anja Laudval. In this fresh form, they relocated to a quieter, more spacious zone, exploring tones and textures rather than rocking out as a guitar power trio. The newer material's softer feel didn't allow for much diversion towards the older tunes, and the sPacemoNkey mood was extended, albeit using a mellower spread, even if the lights remained low.

Travelling beyond Nilssen, the second day of the festival was markedly strong, not just in performing quality, but in its breadth of jazz styles. Joshua Redman had arrived a few days earlier than planned, due to a late gig cancellation elsewhere, so added himself to the high-noon interview session list. Redman managed to combine a self-questioning, self-doubt stance from within a foundation of relaxed assurance. He adopts the attitude of a player who has endlessly practiced, then lets himself drop into free-fall, transposing this to his actual conversational approach. Redman subsequently took the award for full festival involvement, regularly sighted checking out other artists and generally hanging out. This unusual allocation of time undoubtedly contributed to the strength of his playing in coming days.

Illustrating the masterful spread of Moldejazz, we could catch mainstream mysterious entertainer Melody Gardot at the large Bjørnsonhuset venue, singing, playing piano and guitar, as well as closely engaging with the audience, turning a big sold-out gig into an intimate parlour experience, where each audience member doubtless thought that they were being individually serenaded. Or we could discover the great rising-beast local band, Master Oogway, up in the confines of the Storyville Jazz Club, delivering their barrage of leviathan math rock guitar fuzz-overload, or saxophonic-bursting jazz prog complexity. They were one of the festival's most gripping acts.

On a more cerebral, calmer level, Henry Threadgill played what appeared to be a lone Euro-date at the Vårt, with his Zooid combo. He played a lot more saxophone than has been heard in recent years, although there were still substantial stretches on flute and bass flute. Normally, this band is a rigorously oiled organo-machine, precise and scalpel-sharp, but this time out, they didn't seem as rehearsed as usual, even bordering on the slack. This is, of course, relative, when compared to most bands, as Threadgill operates on a highly detailed level.

Then, in the evening, there was a chance to hear trumpeter Ambrose Akinmusire perform his "Origami Harvest" work, an opportunity which is not overly regular, and possibly will be even less so in future, as this ever-evolving artist moves on to his next concept-piece. Jazz took central position, with rap on the one hand, and string quartet modernity on the other. Each of those elements took periodic ascendancy, as the key thrust switched organically, or even origamically. Brooklyn rapper Nappy Nina lent a hard hip-hop flow, highly agile in her phonetic rush, seemingly casually delivered, but always precise when pouncing around the multiple triphammer time-flow beats.

The Mivos Quartet (also from Brooklyn) moved in a more serpentine manner, or when ruffled, taking off into flighty bat-mode. Akinmusire's tonal articulation had an entangled rapport with the electroacoustic mastery of keyboardist Sam Harris, who also tackled the basslines, sometimes so sub that they were a presence rather than a specific line. The strings clipped in alliance with halting drum attacks, time suspended on the hoof, with the set concluding via improvisation, as a bonus. "Origami Harvest" is a masterful example of jazz fusion, old school third stream and hip-hop, updated for the current sonic climate. All aspects naturally become one entity, so your scribe shouldn't have mentioned those separate ingredients, really.

Back with Nilssen, the Wednesday evening found him up at the Storyville Jazz Club with Acoustic Unity, a combo which might be viewed as his primary outlet. They had Akinmusire in as guest, performing very well considering that he was probably immersed quite quickly, within a unit that has a long-running impro-compositional inbreeding. The trumpeter referred to scores, but still ran off on his own during the solo tussles (Acoustic Unity favour simultaneous on-the-run spotlighting, as the players careen and alter ascendancies at lightning flashing speeds), eventually integrating successfully. It was exciting to catch Akinmusire in more extreme abstract mode than when leading his own outfit. Then, the peak experience arrived during the encore, as Redman joined the end of the horn-line. Yes, the tenor man was in the house, lurking around at yet another gig! Their mad scramble through Ornette Coleman's "Happy House" was yet another peak of this year's festival, adding a phenomenal increase of energy to the already long-crackling Storyville.

On the Thursday, Nilssen was ostensibly taking a rest, but then he elected to appear on a lunchtime panel which climaxed with a linear drum duo between him and Dave King, where the pair bonded instantaneously. King was in town as the unfamiliar sticksman replacement for Redman's Still Dreaming group, but was the ideal choice for their tackling of the Old And New Dreams repertoire of Joshua's father Dewey. That post-Ornette Coleman-Don Cherry vibration provided yet another highlight gig of the festival.

On the Friday, one of the most straight-ahead jazz sets was pleasing in its bluesy groovin' directness, as Larry Goldings (Hammond organ), Peter Bernstein (guitar) and Bill Stewart (drums) combined virtuosity, humour and an earthy feel, again providing a Storyville highlight. One venue that was used more than usual during this festival was Molde's main cathedral, where tubaman Daniel Herskedal appeared on that penultimate day. He was joined by a line-up of viola, piano and percussion, with guesting oud player Maher Mahmoud joining for the climactic sequence. A proud processional moved into a doomy foretelling, with massive drum booms and sylvan violin, the delicate and the grandiose alternating throughout Herskedal's set, or sometimes even standing shoulder-to-shoulder. The leader's music has a tougher edge nowadays, with a meaty boom that was intensified by the cathedral surround, the closing "Batten Down The Hatches" acting as an impressive showcase for Mahmoud's oud soloing.

Again on the Friday, Nilssen's Supersonic Orchestra might have been his greatest success, and not just due to its ridiculous tripling of most instruments, in a complex network of violently shifting horn-forces. The extended compositions bled on the knife-edge of scored and unscored, reeling, blasting, slinking and stabbing by turn, creating some of the most breath-holding (and breath-shortening) music of the entire festival. The closing night's Amgala Temple gig involved a trio with guitarist Amund Maarud and multi-instrumentalist Lars Horntveth, and to say that it might have been a contender for one of the least striking Nilssen platforms is to underline how high his general levels were: this set was still strong, in a power-rock, power-electronics and power-groove fashion. Ultimately, Nilssen managed to build a towering example of The Artist In Residence concept, a massive achievement where every (daily) combo involved were different, striking, tightly controlled and/or dangerously unpredictable. The gauntlet has been laid down for 2020's artist-in-residence at Moldejazz, John Zorn, perhaps the only superbeing who can topple Nilssen from this year's golden perch.