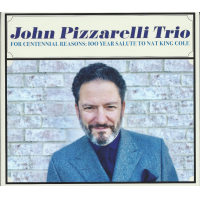 John Pizzarelli's fondness for the work of Nat King Cole isn't exactly a secret. He delivered two full-length tribute albums to that most-revered of figures during the '90s—Dear Mr. Cole (Novus, 1994) and P.S. Mr. Cole (RCA, 1999) —and he's continued to sing Cole's praises in the intervening years. Now, with the great pianist-vocalist's centennial upon us, Pizzarelli had good reason to produce this third salute, a pleasingly mature set honoring one of his prime influences and chief inspirations.

Instrument of choice and vocal range and timbre aside, Pizzarelli has quite a lot in common with Cole. Technical mastery and good taste inform their respective work; both men are born entertainers, injecting wit and humor into the music; and each swings and sings with a sense of cool that's all too rare. Pizzarelli clearly absorbed Cole's best qualities, yet he still presents as his own man, as he always has.

Leading a trio, Pizzarelli gives us fourteen songs that please without pushing. Right from the start, with a winning "Straighten Up And Fly Right," he demonstrates precision when it comes to tempo selection and swinging pocket. Keeping this in the right frame of musical mind is no easy feat, as Pizzarelli takes on both the Oscar Moore guitar duties and the Cole vocal role, but he handles it with ease. That song and others here, like (Get Your Kicks On) "Route 66" and "It's Only A Paper Moon," figured in the guitarist-vocalist's first Cole tribute, but each has evolved and settled into a more solid shape and arrangement over the years. And there's a fair amount of material here that's new to Pizzarelli's discography—quirky tunes like "I'm Such A Hungry Man" and "Save The Bones For Henry Jones ('Cause Henry Don't Eat Meat)"; a woolgathering "The Very Thought Of You"; and a number of other chestnuts.

While Cole's catalog is the obvious focal point, Pizzarelli adds two originals to the mix that prove wholly complementary. "A Hundred Years From Now," which the leader co-wrote with his well-known wife, vocalist Jessica Molaskey, is pure magic. Using jazz parlance to lay out the ideal of enduring romance, it proves to be a real standout. And "Nat King Cool," nodding to the Nat King Cole Trio's instrumental cuts, steps on the gas and sounds great on the open road.

Pizzarelli, with some help from bassist Mike Karn and pianist Konrad Paszkudzki, hits both the sweet and swinging spots in Cole's legacy on For Centennial Reasons: 100 Year Salute To Nat King Cole. With music like this, it's doubtful that anybody will complain if he opts to record a fourth Cole-centric set in the future.

Straighten Up And Fly Right; A Hundred Years From Now; The Very Thought Of You; (I Would Do) Anything For You; I'm Such A Hungry Man; It's Only A Paper Moon; Body And Soul; Nat King Cool; When I Fall In Love; Save The Bones For Henry Jones ('Cause Henry Don't Eat Meat); Hit That Jive, Jack!; Could-'Ja; Red Sails In The Sunset; (Get Your Kicks On) Route 66.