By J Hunter
September 15, 2010
Sign in to view read count
The trombone: long locked into a stereotypical role formed by Dixieland, and only occasionally broken since. Fortunately, the last few years have seen more and more trombonists following J.J. Johnson's lead and bringing the instrument out front. Four discs with trombones at their center have stood out so far in 2010; two are reviewed here, two more will follow in a sequel. 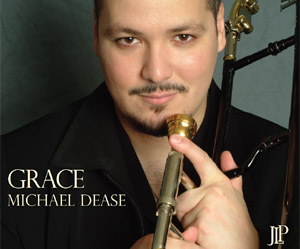 Michael Dease was pretty prominent on multi-instrumentalist Sharel Cassity's disc Relentless (Jazz Legacy Productions, 2009). JLP impresario John Lee has been a fan of Dease's since he saw the young lion stand out in the brass army that is Slide Hampton's World of Trombones. With Grace, Dease gets to stand out on his own. Not that he's "on his own" on his JLP debut as a leader—far from it.

Dease's primary backups are pianist Cyrus Chestnut (a JLP artist himself), bassist Rufus Reid and drummer Gene Jackson. A quartet like this can do serious damage all by itself, but Lee also fills Grace with some truly outstanding guest stars. The opener,"Discussao," gets a bump from horn master Claudio Roditi and guitarist Mark Whitfield; Roditi's flugelhorn dovetails with Dease's evocative sound, and Whitfield's acoustic guitar melds with Roger Squitaro & Circle Rhythm's subtle percussion to double the magic of one of Antonio Carlos Jobim's most beautiful pieces. Dease has a lush, romantic tone that is tailor-made for ballads and bossas, and his technical wizardry extends to tenor and soprano saxophones, as well as to valve trombone. He nails Miles Davis' "Four" with sterling help from Roy Hargrove's flugelhorn, and Dease gives two Ivan Lins tracks—"Setembro" and "Love Dance"—the respectful treatment they deserve.

Thankfully, Lee doesn't stuff Dease into a pigeon-hole. Bix Beiderbecke's "In a Mist" may start slow and lush, but the pace picks up in the middle section until Dease and Hargrove are both swinging for the fences. "Discussao" is followed by McCoy Tyner's "Blues on the Corner," which struts down the street like a dandy in a new suit, accompanied by Eric Alexander's on-target tenor sax. John Coltrane's "26-2" lets Dease sink his teeth into some straight-ahead bebop, while Oscar Peterson's "Tippin'" is a speeding Ferrari hurtling downhill with no brakes. Dease handles every bump and curve as easily as you please.

Chestnut's work on Grace is off the charts. As a primary foil for Dease, he couldn't be better, and his solos are beautifully constructed and beyond soulful. Cassity contributes both alto sax and alto flute to "Setembro," splashes more flute onto a meaty arrangement of Randy Brecker's "I Talk to the Trees," and teams with Dease and Hargrove to give Herbie Hancock's "Toys" a glowing front line. The latter piece might have been better if Hargrove had been on trumpet and Cassity had returned to alto sax, but that array would have sounded out-of-character with the rest of the disc.

It's cool that JLP gives Hall of Fame jazzers a place to play. But Lee's decision to devote at least one release a year to an up-and-comer may be his best decision of all—particularly if all the newbies make something as great as Michael Dease's Grace.

Visit Michael Dease on the web. 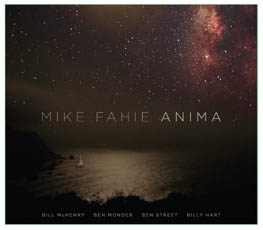 Connecting a disc's title to the spirit of music itself may sound resoundingly pompous, but Mike Fahie's liner notes to Anima actually gets the job done: "Music (like life) has an anima—an undefinable essence that makes it more than the sum of its parts and enables us to communicate at a deep, emotional level." Basically, that one sentence puts both the music and the performances on Fahie's BJU debut into a nice, neat nutshell. Nevertheless, here are a few more details.

"The Journey" opens the disc with a trip to the spiritual beginnings of music: Fahie's echoing in-the-clear solo symbolizes the first time some prehistoric man picked up a bone with holes in it and blew in one end just for fun. It's stark, it's spare, and it's a haunting attention-getter, particularly when Fahie starts to burble and hiss like some long-gone creature. His solo and accompanying music broadcast a Middle Eastern influence that tempers the piece's Western direction; Bill McHenry's saxophone incorporates that influence into his first solo while Ben Monder's guitar fills add a touch of mystery. The piece never gets faster or louder per se, but drummer Billy Hart throws bombs and scrapes cymbals to increase tension and drama, and Ben Street's bass throbs like a thumb that's been hit with a hammer.

Fahie's writing, arranging and leadership talents possess the same outstanding quality that saturates his playing skills. The layered meditation "June with John" has a seemingly-simple premise: play a tune, remove one note per measure from 8 to 0, put all those measures back, and keep repeating the process. (Sounds easy? Try it while improvising; if it's half as good as "June," consider it a success). Fahie throws Paul Simon's "Cecelia" into a darker context, intimating that Simon's protagonist may not be all that jubilant about his current relationship. "Waltz for P.C." is a slice of Americana that is so relaxed and so much fun, while "Democracy" is just that: every player has an equal say in the process, which makes for a progressively titanic excursion into free jazz.

Despite the quintet matrix and the extreme talents on offer, there's a sense that Anima has been stripped to the bare essentials, even as it offers maximum enjoyment. McHenry could have gone big on the bebopping "Village Greene," but he avoids the need for a "big" sound because of the adventurous choices he makes. Hart can (and does) go big whenever he wants, but it's his site-specific accent work on Anima that makes the biggest impression. As usual, Street and Monder—or, as Fahie refers to them, "The Bens"—are so dialed into each other, they are essentially one four-armed, ten-stringed instrument that brings robust shape and stunning texture to whatever they touch.

Jazz needs all the new experiences it can get. Mike Fahie goes one better: Anima gives the genre a taste of new life—not a bad accomplishment on a debut.

Visit Mike Fahie on the web.

Tracks: Discussao; Blues on the Corner; In a Mist; I Talk to the Trees; Four; Tippin'; Setembro; 26-2; Toys; Love Dance; Grace; Salt Song.