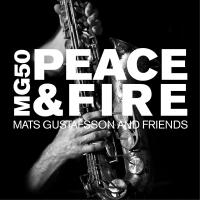 Mats Gustafsson at fifty. Name another artist who has had this significant and widespread effect on jazz, noise, free improvisation, alternative rock, electronica, and free jazz. Besides John Zorn, that pool is quite shallow. Gustafsson's music seems to attract innovative players into imaginative situations. If you are a fan, this 50th birthday celebration recorded in October, 2014 at Porgy and Bess, Vienna is your personal slice of cake. If you know nothing about Gustafsson's music, this is a great introduction to ensembles he's created, associated with, or players that have inspired the saxophonist or been inspired by the saxophonist.

What's missing? Sure we wish Peter Brötzmann, Joe McPhee, Barry Guy, Merzbow, Thurston Moore, Balázs Pándi and the anarcho-punk band The Ex, all pieces and parts of the Mats Gustafsson story could have completed the loop. Or, are they just planning to make the anticipated 60th birthday celebration?

The music of these four discs comprises sixteen different lineups, and of the twenty-nine tracks, Gustafsson performs on seventeen.

Disc one opens with two free pieces by Gustafsson and percussionist Didi Kern, "Peace" and "Fire." Both present that itch that cannot be scratched of extended technique. Same for RISC or Billy Roisz and Dieb13's ambient electronic drone "Birthday Boy." Next up is Sven-Åke Johansson, the septuagenarian drummer performing a solo and singing the two classics "I Didn't Know What Time It Was" and "I Cover The Waterfront" as he did on Hudson Riv A Foggy Day (SÅJ, 2011). The highlight, though, on disc one is Gustafsson's band Swedish Azz with Per Åke Holmlander (tuba), Kjell Nordeson (vibraphone), Dieb 13 (turntables), and Erik Carlsson (drums). The quintet subverts the melody of conventional modern Swedish jazz with extended technique, sampling and distortion of time. Besides here, their output has been available only on 12," 11," 10" and 7" vinyl, and are indeed, prized editions to any collection.

Disc two brings the the noise with Fake The Facts, a skillful free trio of Gustafsson playing both saxophone and electronics, Martin Siewert (guitar/electronics) and turntable artist Dieb13. They are joined by drummer Martin Brandlmayr and Paul Lytton for nearly twenty minutes stirring a cauldron of energy and clamor. This is followed by the duo of electronics artist Christof Kurzmann and vocalist Sofia Jernberg, the Swedish Shelly Hirsch and finally three tracks by Gustafsson's most ambitious project to date, his ensemble Fire!, which can be as small as a trio (with Johan Berthling and Andreas Werliin) or as large as a twenty piece orchestra. Here the trio expands to a septet with Agustí Fernández, two vocalists and bagpipes. The dreamy first piece "Molting Slowly (Without Noticing)" is warm up for the more intense and heavy sounds of "Exit Part Two" and "Would I Whip." Two pieces that would satisfy any Zeppelin fans out there.

Disc three finds Gustafsson in collaboration (apparently a first) with the Austrian contemporary music ensemble Klangforum Wien. Their two pieces explore a sort of chamber free improvisation, mixing strings, oboe, flute with the birthday boy's fluteophone, slide and baritone saxophone. Next up is a reunion of Gustafsson with the Tr!o of Günter Christmann (cello & trombone) and Paul Lovens (drums & cymbals) plus Thomas Lehn's synthesizer. Each player, a master of free improvisation, paints a Pollock-like smatter of confusion, that requires a hyperopic ear.

The disc ends with perhaps the finest garage rock (slash) jazz band in the world, The Thing. Gustafsson, Ingebrigt Håker Flaten, and Paal Nilssen-Love are joined by Chicagoan Ken Vandermark for three pieces. Each piece builds from the most delicate interactions into a flaming ball of fire.

Disc four is sans Mats. Each piece is a solo performance with the exception of Christof Kurzmann and Ken Vandermark's duo "Vienna Upstairs," a mesmerizing landscape piece with the saxophonist sailing over the carpet of electronics. Kjell Nordeson parades and regales us with his percussive attack on vibraphone and drum set. Per Åke Holmlander on tuba, Agustí Fernández, piano and Erwan Keravec's bagpipes each expand their instruments with extended technique on their solo tracks. Each a marvel of approach and each a captivating listen. The disc ends with saxophonist Anna Högberg alto solo "Ha Den Äran" (Happy Birthday). The young Swedish musician may just be the next Mats. Her technique, featured on her stunning release Anna Högberg Attack (Omlott, 2016) is the next evolution in improvised jazz, and gives us confidence that the revolution begun by Coltrane and carried on by Ayler, Brötzmann, and Gustafsson will continue.