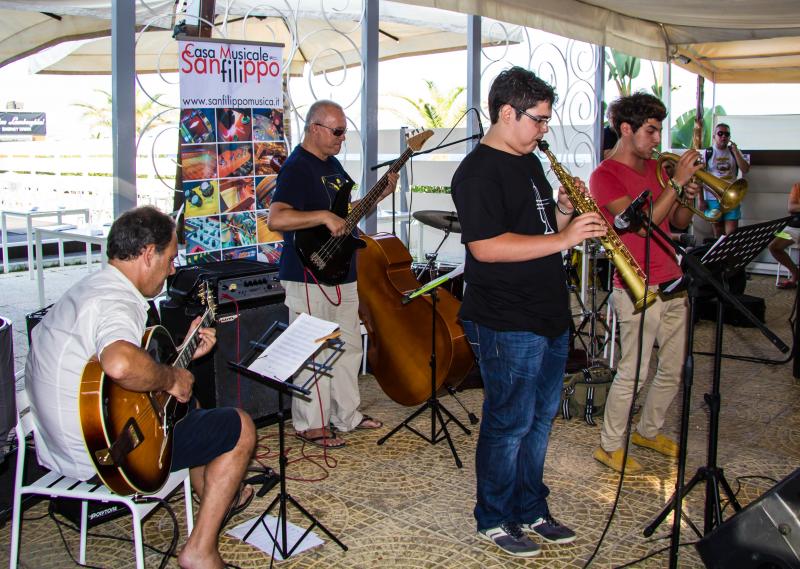 Messina, the city on the Sicilian side of the Straits connecting the Thyrrenian and the Ionian seas—for the geographically challenged, that bit of sea on the point of the Italian boot—is not on the list of the most famous Italian or even Sicilian touristic locations. Overshadowed, in its own province, by Taormina—and by the cultural as well as environmental riches of other cities—it serves mainly as the point of entry, its harbor busy with ferries for visitors coming by train or car.

The Straits area is prone to earthquakes, and in 1908 a disastrous tremor destroyed the city—with over 70.000 dead, one of the most terrible seismic events of the modern era, wrecking most of the historical buildings. Messina was rebuilt on a modern plan, and its pleasant center, with big regular avenues, lacks the exotic charms of the narrow street and alleys of other Italian cities. But the savvy visitor can find plenty to enjoy here: the view of the straits is unique; the sea crystal clean due to the strong permanent currents; the swordfish and tuna fresh; and the granitas to die for. Even other Sicilians will concede that Messina is the capital of the grainy iced lemon juice or cream-topped coffee.

Founded by Greeks on the site of its harbor—a sickle-shaped peninsula offering natural repair to ships, and using a crescent-shaped city as logo, Messina has more than this mythic connection to jazz. The area was infamous for the two giants, Scilla and Cariddi, who stood guard on the straits' narrowest point, sinking the ships trying to pass by—a myth born from the currents that can reach eight or nine knots, truly a river running into the sea, that would deviate ships on its rocky coast. In modern times, the same names were given to the first steamboats used to cross from the Island to the Continent, as Sicilians say; pretty much the same sort of ships used on the Mississippi. And after the earthquake, among the many emigrants to the USA was a boy from Messina who made his name in music: Pete Rugolo, arranger for Stan Kenton and producer of Miles Davis' Birth of the Cool (1957) sides for Capitol. Messina gave his good share of musicians to jazz: other greats with roots on the Sicilian side of the straits include Joe Pass (Passalacqua), Chick Corea (mother's side), and Joe Lovano—not a bad crop!

Enters pianist Giovanni Mazzarino, one of the major players in Sicilian jazz today. A worldwide career as both a leader and appreciated accompanist for vocalists did not diminish his love for the island, and for the past few years he's organized a festival-cum-summer workshop in the city where he now resides, Piazza Armerina, on a hill in the center of Sicily. Due to local political uncertainties, the festival was not bound to happen this year, so he swiftly moved his operation to Messina, aided by longtime friends and followers of his music, so that with the sponsorship of the town, the university and the port authority, a last-minute program of high quality was put together and took place from July 17-23 in fabulous locations all along the sea. 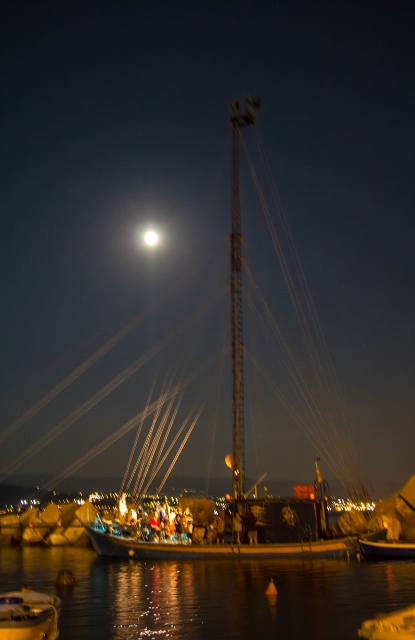 Rava does not need introductions. His incredibly full agenda brings him all over Europe in the summer, but he gave no signs of slowing down in Messina, where he led a scintillating performance with a Sicilian quartet: Cafiso, Rubino, Toscano and Cafiero. Francesco Cafiso, at the ripe old age of 21, has been around the world, including many concerts with the patronage of Wynton Marsalis, and he's maturing into a modern musician built on the freer part of the Phil Woods heritage. Dino Rubino, slightly older but an amazing talent since a kid—"my favorite trumpet player," says Rava—played his first instrument, piano, with a balanced blend of melodic invention and rhythmic drive. The opener was the trio Urban Fabula, with pianist Seby Burgio, bassist Alberto Fidone and drummer Giuseppe Tringali delivering their zany combination of different musical genres with humor, taste and easy swing. Joining them was yet another Italian young trumpeter, Daniele Raimondi, who had impressed me in Siena before and is currently residing in Paris, a city hospitable to Italian musicians.

The second night saw Italian vocalist Gegè Telesforo, whose brand is a mix of vocalese, funk and heavy innuendos during long introductions. Despite occasional successes, the set failed to ignite the interest, but with Telesforo's famous TV program DOC hopefully serving as an introduction to jazz for the general public, a more than honorable function. The first act was the local duo of pianist Luciano Troja—whose Earl Zindars tribute, At Home With Zindars (Self Produced, 2010), is a unique testimony—and guitarist Giancarlo Mazzu/Luciano Troja Duo. Their slightly cerebral plan was to transform well-known standards into totally new variations, mostly not stating the time and carrying the familiar tunes into unfamiliar territory, often with highly complex feats of interplay. The combination of guitar and piano is always difficult, but the use of advanced techniques let each instrument sing with their own voice without too much interference.

Maria Pia De Vito is another vocalist, but what a difference. Her set, with English pianist Huw Warren—a duo that met on Myspace and has been collaborating for many years now, was a totally original combination of traditional songs, improvisations, vocal acrobatics always functional to the storytelling, and the trademark versions, in de Vito's Neapolitan dialect, of Brazilian songs, the language of the Southern Italian city being perfectly suited to the timing and phrasing of chorinhos ("Um a Zero") and bossas. A quartet led by guitarist Giuseppe Mirabella opened, again with Rubino, Fioravanti and Bagnoli, presenting his latest CD, Naumachia (Abeat, 2013). An original composer with a distinctive guitar sound and penchant for improvising oblique lines, Mirabella is quietly affirming his personality.

Fabrizio Bosso might well be the most technically advanced trumpet player in the world, bar none. His facility, speed, range and attack are difficult to match. But they are a winning combination because of his musicality: the simple statement of the melody of "You Don't Know What It Means," with its subtle shading of tones and phrasing, was enough, even before the solo, to confirm his place in the pantheon. He was accompanied by the festival's director, Giovanni Mazzarino, on piano, and by the powerful support of double bassist Riccardo Fioravanti and the crystal clear drummer, Stefano Bagnoli. It was an amazing example of how a drummer can energetically propel a group while remaining unobtrusive—transparent to the sound of the group—deftly using dynamics and timbre.

Joining the singers and students was a cast of Sicilian musicians, including many of the above as well as the well-tested duo of Sergio Munafò on guitar and Riccardo Lo Bue on bass; drummer Mimmo Papa, perfect in his support of the singers; and pianist Riccardo Mezzatesta. And, again , many joined in the late-night jams: virtuoso, jovial clarinetist Nicola Giammarinaro, bassist Giuseppe Cucchiara and altoist Francesco Patti, all young members of Bagnoli's successful We Kids Trio; singer Serena Ferrara, who won the scholarship awarded to best singer; twins Giovanni and Matteo Cutello, on trumpet and alto, respectively—14 years old and the latest of an apparently inexhaustible mine of talent which is today's Sicilian jazz.

But the most moving moment was when, in the balmy Sicilian night, the 18 year-old Nicola Caminiti picked up the soprano and let "My Favorite Things" rip out, channeling John Coltrane in such a way as to floor me. The following performance, with Donato, Cucchiara and versatile drummer Emanuele Primavera, was one of the highlights of the festival, rife with the freedom and love for the tradition that are the trademarks of great jazz. Caminiti was awarded the scholarship for under 21 students, and he's clearly a name to watch. 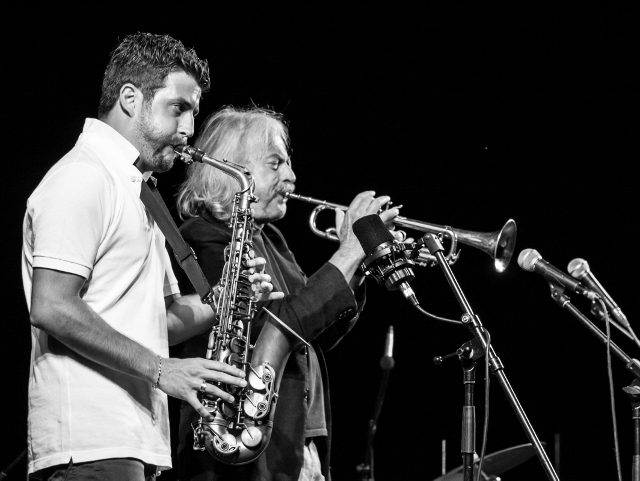 Arriving in Messina, the first thing noticeable on the sea are the unique structures of the feluccas, hunting for swordfish, and the festival closed with an unheard-of jazz party on one of them, moored in the tiny harbor of Ganzirri. A fitting conclusion, symbolic of the concept of the festivals visionary director, Giovanni Mazzarino.