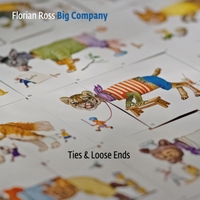 The late pitcher Satchel Paige once offered this sound advice: "Never look over your shoulder; someone may be gaining on you." Nowadays, those who seem to be gaining the most ground when it comes to big-band jazz are Europeans and Asians who've been listening closely to and learning from their peers in the States and using that knowledge to build a better mouse trap, so to speak. Composer / arranger Florian Ross, based in Cologne, Germany, had been writing and filing away big-band charts for almost twenty years before he decided to record some of the best of them, assembling a group of young musicians from Cologne to form Big Company and release a superb debut album, Ties & Loose Ends.

There are several good reasons for that title, which Ross fully explains in the liner notes. And while he's no one-man band (seventeen others are involved), Ross not only wrote eight of the album's eleven numbers and arranged everything, he also chose the musicians, produced the album, mixed and mastered its various tracks, designed the jacket cover and took the photographs that are displayed inside and out. One assumes he also swept the studio and turned out the lights afterward. As Ross loves classical and popular music as well as jazz, he has augmented his own compositions with luminous arrangements of Maurice Ravel's graphic prelude to "Le Tombeau de Couperin," Modest Mussorgsky's tranquil "Une Larme" and Victor Young's elegant standard from the Great American Songbook, "My Foolish Heart."

Ross's themes are by and large "earnest contemporary," comparable to music being written these days by the likes of Maria Schneider, Dave Cavanagh, Darcy James Argue, Carla Bley, Kenny Werner, Dave Chisholm and others. Nothing is amiss until track nine, "Eleanor," on which Ross employs an amplified and distorted voice to undergird the ensemble and Phillip Bramswig's guitar. Well-meant, no doubt, but largely incoherent and thus pointless. Alas, Stefan Schmid's squawking tenor solo only adds to the confusion. Elsewhere, matters are far more balanced and agreeable, starting with Ross's "Doors Closed" and continuing through "Cycling," "Running Walls," "Prickly Pear," Meditation in D," "Slow Motian" and "Rosa Cantina." Each of those essays is rewarding, with perceptive solos along the way by Schmid, soprano Frank Vaganee (who leads the splendid Brussels Jazz Orchestra), alto Christoph Mockel, tenor Wolfgang Fuhr, baritone Marcus Bartelt, trumpeters Matthias Bergmann and Menzel Mutzke, trombonists Klaus Heidenreich and Peter Schwatlo, pianist Lucas Leidinger and bassist Dietmar Fuhr. The rhythm section is dependable, albeit slightly under-recorded at times.

When all is played and done, not a bad start for someone who waited more than forty years to record his first big-band album. Surely, Ross must have enough fresh charts set aside for another album (or more).