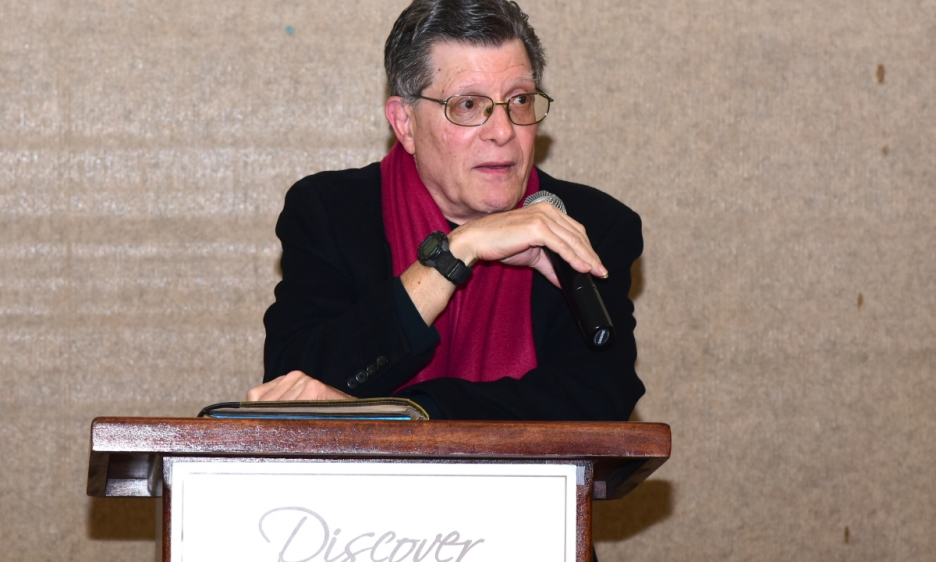 By MARC COHN
September 2, 2020
Sign in to view read count

Dr. Cohn is a New Yorker-in-exile and has been doing jazz radio as an avocation since 1967. He is Professor Emeritus in Seed Biology at Louisiana State University, where he has won numerous teaching awards. He is a widely recognized authority on seed dormancy, is Editor Emeritus of Seed Science Research (the premier scientific journal in the field), and is a recipient of the Seed Science Award (nationally, the most prestigious research award in seed biology) from the Crop Science Society of America.

As a pre-teen listener, hearing pop tunes on WMCA and WABC, listening to classical music on WQXR, Jean Shepherd monologues on WOR, and discovering Ed Beach on WRVR.

From the above listening. The really great DJs made you feel like they were talking to you, personally—not talking to the walls.

Lloyd Moss on WQXR (who was a "closet" jazz fan); Jean Shepherd on WOR; Dan Ingram on WABC; 'Uncle Ed,' Billy Taylor, Del Shields, Alan Grant for the above reasons. And they played good music for their respective genres. You could have a good time AND learn something.

Freshman year in college. One of my dorm-mates had a pirate radio station in his room with a microphone and one turntable. You had to chatter while changing records. "Real" radio started shortly thereafter on WNEU in Boston.

All those guys, mentioned above, were my long-distance mentors. I internalized what they were doing versus your run-of-the-mill DJs. I didn't have in-person mentoring. I learned by listening back to "break-tapes" of my own shows, which patter-wise were initially pretty weak (I'm being polite here). When you hear yourself doing/saying dumb things, first you want to hide and then you get mad and figure out how to fix them.

From real radio, indeed: "Midnight Special" by Jimmy Smith. It was the theme of my show, which started at midnight.

WNEU/WRBB (Boston), WVBR (Ithaca, NY), WTJU (Charlottesville), WLSU/WPRG/KLSU (Louisiana State University), WRKF (Baton Rouge) and presently WHYR. All volunteer, except for one summer in Ithaca where I got paid to do a Saturday afternoon "top-40" soul show.

This could take a while. Here's the time structure. On WHYR, the show is two hours (although I've done shows as long as five hours in the past including progressive rock, R&B, ambient and an occasional country music show). There are four segments that need to time out to 28'56" each due to network syndication considerations. A VERY important idea one needs to consider today, with the vast amount of competing media, is 'why should someone listen to me play music that almost anyone can play for themselves at any time?" When local radio or one's personal collection were the only jazz sources, that was an important question but not the critically vital question. So, I've constructed a general 'format': 25% 21st century music and 75% classics, going all the way back to the 1920s. I have a spreadsheet with over 100 major players from the history of jazz, as well as some underserved players. I keep track of when, what and who I've played. You've got young people today who don't know who Count Basie is! Everyone else is doing 'what's new/hot.' And maybe it's new, but most of it isn't all that hot.

G&M has two special shows each month: 50th anniversary celebrations of Blue Note recordings and birthday salutes. Other shows feature various ideas I get from the jazz press, jazz literature (I'm reading and rereading constantly), and records of note, as well as the major centennial celebrations and multi-week, chronological career retrospectives (We're in the midst of surveying Sonny Rollins. In the past we've done Bird, Trane and Horace Silver). And then there are those times when you're listening to one track (old or new), the light goes on in your head, and a set or segment jumps out. We also do various compare and contrast segments to illustrate different approaches to the same tune. Our R&B versus jazz version C&C is VERY popular.

Then, there's how the songs flow/fit together. I don't do sets longer than three tracks anymore—how can a listener remember the third song in a five-song set? I spend a lot of time deciding which tracks to play. The main criteria generally: is the melody/track memorable and does it have the right groove. I allocate about two minutes/segment for talk, which is mostly running down what you heard and who's playing. In past iterations of the show, I've talked a lot more (remember, I'm a real professor and without some discipline, I talk like one). But that was back in the day when the DJ was the primary source of information. Today, you give the listeners the essential points and they can further explore to their hearts' content on the Web. I'm just the guide by the side.

My obsessive time management software tells me the number is 30 hours/show.

All of the above.

Let's try the short version. Do they have something to say? Do they have a distinctive sound (for a listener, not another musician)? Are the tunes played distinctive and memorable? I have a line that I use when I train scientists: Just because you can type 140 words/minute doesn't mean you have anything to say. In other words, exceptional technique is essential, but it's just the baseline. That's a real issue today to my ears.

You talk TO your listeners, not AT them (I visualize faces on the wall behind the console). Most people reading off scripts sound like they're reading. Within the requirements of doing radio, make them feel like they're sitting with you in the house listening. From your tone/attitude make sure that the listener feels that you are absolutely THRILLED to be sharing the time with them. If you are bored with your show, your audience was bored 10-minutes before you were! Fortunately, I have Ms. Natalie Caruso from WHYR to take care of the social media promotion.

Do you have a sense of who is listening to your show?

Teenagers, young adults, grandparents, various dogs and cats all over the world. When I did a night-time show just locally, I'd have young people come up to me at gigs I was mc'ing and tell me they listened to the show under the covers in bed, late at night, just like I did at their age. Or waiters at restaurants would recognize my voice and tell me that they got into jazz as youngsters because of my show. G&M is programmed for the casual listener who wants to get more into the deep end, although a lot of musicians tune in and enjoy the show. Most shows can be enjoyed either in the background or in your face.

Good radio is good radio. But like every other medium, there's a lot of vin ordinaire out there, which makes it challenging to discover/recognize the good stuff for the average listener. Streaming jazz sites (without a DJ talking) become lifestyle accessories or aural wallpaper, i.e. background music. Hopefully, at least the musicians are getting some royalties.

Well, I skip around a lot. From the AAJ stable, I usually listen to Mondo Jazz and Jazz At 100 every week and sample a few others. I'll dip into WBGO in metro New York and Jazz FM out of London (Ruth Fisher & Chris Philips, mostly) to check out the competition, so to speak, and to hear the flavor of the month.

Can you share a funny episode that happened during your radio career?

No music in the shower; that's quiet time.

Well, Buddy Bolden and Joseph "King" Oliver, just for a start. If you have to ask why, you'll never know....

What underrated disc do you wish everyone knew about?

Oh, where do I begin. Rodney Kendrick (Dance, World, Dance & Last Chance For Common Sense (Verve); Bennie Wallace (The Talk Of The Town (Enja); an Eddie Harris LP on Angelaco (Sounds Incredible—don't know if this was ever on CD); Houston Person (Soul Dance (Prestige); Ray Anderson (Where Home Is (Enja); Arnett Cobb (Smooth Sailing (Prestige); Marty Ehrlich (New York Child (Enja); Hines/Grappelli on Black Lion; all of the Ralph Peterson Fo'tet records on Blue Note; any solo Jessica Williams or Dave McKenna discs you can find. That's just off the top of my head.

That's a nasty question. I can only speak about recordings. More of the recorded history is accessible today than ever before. So, hearing/seeing the music on the web is easier than ever. There's more new music available at the highest technical level than I've heard in my lifetime. HOWEVER, very little is memorable, whether it's avant-garde or contemporary. I can hardly tell one young tenor player from another. The writing may be sophisticated technically, but if you can't whistle the tune when you walk down the street, it's forgotten. What was it that Bu said? Music should wash away the cares of everyday life? Not happening for many 21st century releases. Sometimes, I have to stop screening new releases because I feel the darkness descending on my state of mind. I could ramble on about this, but that's the short story. We don't get enough live touring groups playing locally, and when we do, the shows are mostly half-filled. Hopefully, the state of live jazz is better elsewhere (pre-and post-COVID); I can't say.