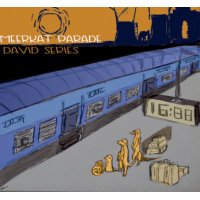 Apparently the official term is "clan" or "mob" when meerkats gather in a group. Despite their being social animals, nothing suggests they'd be organized enough for anything resembling a parade—that would only be a silly distraction from the business of burrowing, foraging and avoiding the jackals. Nonetheless David Series and a sharp crew find some good humor in the idea. His debut as leader doesn't aim to be quite as wild and aggressive as its namesake; this quartet's initial fusion jaunt shows the playful chemistry of smart friends having fun.

Meerkat Parade leans on the easy side of jazz without becoming bland. There are electric tones to the guitar and keys, generally the smooth Pat Metheny-like kind that serve as candy for the ears. James Lindsay introduces the recording with an unhurried double-bass solo before some subtle guitar shadings creep in; soon Huw Rees steps in with some angular organ lines, not exactly harmonic and not random. The opening drift makes for an interestingly atypical intro piece before they fill the session with a series of sharp and solid grooves.

The leader's laid-back compositions find him twining unison lines with the others while still leaving plenty of breathing space for each member somewhere. The breezy "Oink" rolls with the low-key cheer of a springtime daydream, Series and Rees trading sunny leads before the rhythm section builds to an understated crescendo. With "Where's Waltzy" it's the bass's turn to play hopskotch with Series' smooth chording; "Hermwei" features some brisk unison rhythms that keep all the players consistently on their toes despite the easygoing tone.

Once Max Popp's drums propel them through the finale under a frisky dash of Herbie Hancock funk, the affair can't help feeling over a bit too soon. It may be because this Parade wraps up in a tidy 36 minutes, though it feels just right for what's on offer—a comfortably light-swinging and focused jaunt without any meandering or padding to be heard. Let's hope it serves as an opening set in anticipation of fun jams to come.