Jon Faddis at The Wheel 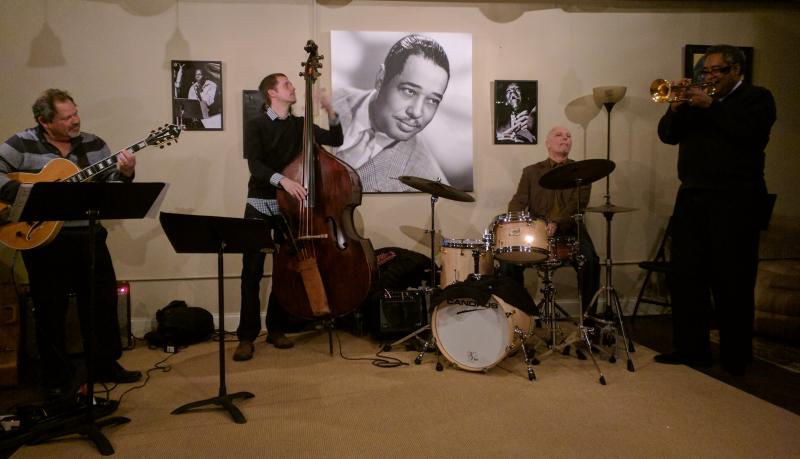 "The Wheel Sessions" have been taking place in the funky performance space called The Wheel in Greenville, South Carolina since August, 2016. Ten bucks gets you two sets of music with many of the best jazz players in Upstate South Carolina and the Asheville, North Carolina area, plus your choice of beer or wine. There is a deep bench of excellent local performers who have graced the series, but getting famous trumpeter Jon Faddis to headline a show has to be considered a coup.

The rhythm section included several regulars in the series: veteran guitarist Jorge Garcia (a Cuban native, Garcia now lives near Greenville, but is still active in the Miami, Florida area); double bassist Mike Holstein; and drummer Kevin Korschgen (also the founder of The Wheel Sessions). They opened with the Charlie Parker classic ""Confirmation," with hot solos all around. Prompted by the jazz musician portraits that line the walls of the space, Faddis told a story about legendary drummer/bandleader Art Blakey. It seems Blakey arrived at a band meeting. The band members were expecting to get paid, and he said "I've got some bad news. I got mugged and they took all your money." After the laughter subsided Faddis noticed the Duke Ellington portrait, and called up a woman from the audience to demonstrate Ellington's European greeting technique. Kissing the woman four times, he explained "one for each cheek."

After calling Miles Davis' "All Blues" the trumpeter called two young trumpet playing proteges to the stage. Caleb Pitman lives in Greenville; Alan Blanchard made the trip from Tallahassee, Florida. They both played very well, and also got lessons on the protocol of sitting in—basics like when to come on stage and where to stand while others are soloing—firmly but humorously. The set continued with a classic bossa nova, Luiz Bonfá's "Manhã de Carnaval" from the movie Black Orpheus, followed by "A Night in Tunisia," the most well-known tune from Faddis' mentor, legendary bebop trumpeter Dizzy Gillespie.

Something reminded Faddis of a James Moody story, about the Pope calling for a late night pizza delivery. In a rush, the delivery man parked in a restricted zone. When he got back from the delivery, he found a policeman giving him a parking ticket. Protesting "I was delivering a pizza to the Pope," the cop replied "I'll tear up the ticket if you give me half of what the Pope gave you for the pizza." Faddis mimed the down-stroke of the sign of the cross.

The performance demonstrated that Faddis still has his high screech trumpet range. And the three trumpeters traded eights, then fours. An unaccompanied trumpet solo incorporated a humorous quote of "Hernando's Hideaway." Bringing the trumpeters up front for bows, Faddis joked that they made a "reverse Oreo" (white on the outside, black on the inside).

The second set began with an even younger trumpeter called to the stage (playing a borrowed trumpet, so definitely unplanned): Bobby Metaliano, who called Horace Silver's "Song For My Father." For "Mood Indigo" trombonist Brad Jepson joined in, first with a cup mute, then open. He stuck around for "Softly, As in a Morning Sunrise," joined by another Wheel regular, Tom Wright on alto sax. The horns all traded eights with the drums. The entire band then sight-read an original by drummer Kevin Korschgen titled "Blakey." This kind of surprise is typical of the entire series: an opportunity for experimentation in front of an accepting audience. During the following tune "Caravan" Faddis made a different kind of musical joke by briefly turning on the distortion pedal on Garcia's pedal board. The band then played Miles Davis' traditional rhythm changes tune "The Theme" to close.

It's a rare thing to experience jazz played largely acoustically (the only amplification was used by the guitar and bass—there were no microphones or public address system) in an intimate space, let alone jazz played on such a high professional level. The experience was bittersweet, as Korschgen announced that there would be only two more Wheel Sessions in this venue. It will become a storefront, so the series will have to find a new home. Jon Faddis generously played a second benefit show on Saturday night.