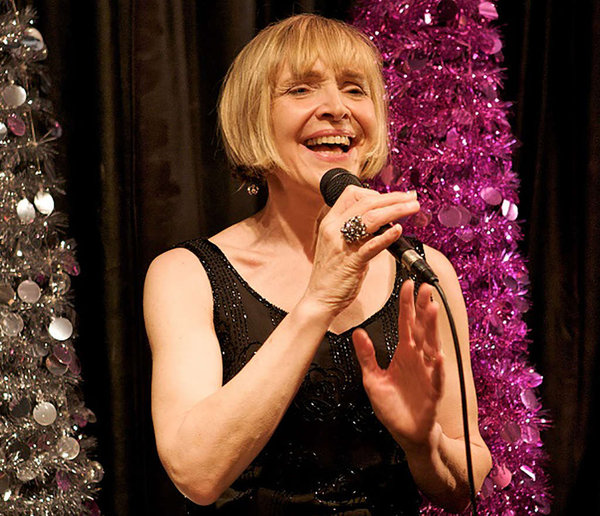 Mary Ellen Desmond's Comfort and Joy Concert commenced a decade ago as a shot in the dark, and now, after eleven years running and a CD to its name (Comfort and Joy, Frontrow Records, 2013) the annual event has become a Philadelphia institution. It's addictive. Many jazz fans, including this reviewer, have undergone withdrawal symptoms when they had to miss a year! There's nothing quite like it for authentic jazz that captures the energy and sentiments of the season. The renditions on this night were purveyed by Desmond, accompanied, as usual, by her outstanding group consisting of Larry McKenna on tenor saxophone, Tom Lawton on piano, Lee Smith on bass, and Dan Monaghan on drums.

The performance stood in sharp contrast to the Christmas season's hackneyed and repetitious music that comes over the airwaves and is piped in everywhere, which, if we're honest about it, has devolved into a marketing strategy for holiday sales. Desmond's singing, in addition to being polished and honed to perfection, is sincere and honest, capturing the range of genuine feelings and experiences that we all have during this time of year. And the group backed her seamlessly, with McKenna achieving a level of playing that the Pied Piper couldn't rival. The fact that the concert was held in the beautiful historical sanctuary of St. Luke's Church furthered the true values of the season: peace, universal love, and hope.

The set began with an instrumental version of the holiday standard "Santa Claus is Coming to Town" done as straight up jazz with swing and bebop flavorings. McKenna delivered several great choruses, as did Lawton and Smith on their respective instruments, setting the stage for what was to come. Desmond came on with a few words of greeting and sang "The Christmas Song" ("Chestnuts roasting on an open fire"), indicating that it was composed by Mel Torme, himself a great jazz vocalist. (She mentioned the composers throughout, pointing out their often taken-for-granted contributions to the jazz legacy, which is the reason their full names are given in the set list, below.)

Desmond interspersed lesser known tunes between the standards, showing her mastery of the repertoire and her desire to air songs that aren't often heard. Bob Russell's "Warm in December," Hoagy Carmichael's "Winter Moon," and "Perhaps this Wintertime" (Profile, Dreambox, 2009) a McKenna original with lyrics by Melissa Gilstrap, who was present in the audience, were prime examples. These were rendered with great depth of feeling along with superb vocal control by Desmond. Over time, she has honed her use of dynamics and timbre to expressive perfection, and thus she was able to convey great depth of meaning to these more personal and intimate songs.

An unexpected highlight of the evening was the well-known duet "Baby It's Cold Outside," featured in the iconic album, Ray Charles and Betty Carter (DCC Jazz, 1961). In a cameo appearance as a singer wannabe, the drummer and jazz writer Bruce Klauber, who is by now a Philadelphia legend, dueled for attention with Desmond, as the song goes, trying to get her to stay with him on a winter night as she tells him repeatedly she has to leave. Klauber has a voice that would scare all the animals out of the woods, but he stayed on top of the tune and milked every desperate emotion from it. It was perfect holiday fun.

Finally, it is hard to imagine a more swinging rhythm section than Lawton, Smith, and Monaghan. Lawton's and Smith's solos were rich and inventive, and Monaghan's drumming was sophisticated, light, and lively, setting up Desmond for an exciting holiday bash.

The concert was sponsored by The Saint Luke's Hospitality Center, an outreach ministry of the Church of Saint Luke and The Epiphany that provides help to lives affected by AIDS/HIV. This year it shared the proceeds from the show with the Fikelela AIDS Project, an outreach program of the Anglican Church of Cape Town, South Africa. Fikelela strives to reduce new HIV infections and works with children's centers for the abandoned and orphaned.