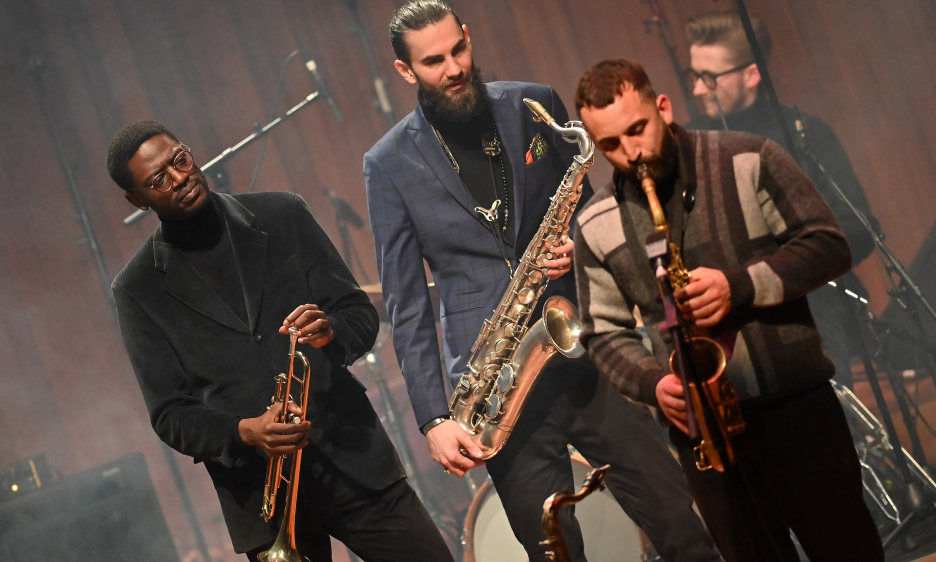 An elegant yet gritty exposition of Kavuma's lyrical modern-day hard bop, tonight's performance, which was sold out, must surely have been one of the 2022 London Jazz Festival's most enthusiastically received events.

Fittingly for one of the closing events of the 2022 London Jazz Festival, trumpeter Mark Kavuma's performance at the Barbican Centre's associate concert hall, a few hundred yards down the road from the main venue, was on an epic scale. Kavuma appeared with his twelve-piece Banger Factory band, an eleven-piece gospel choir and the eighteen-piece Kinetika Bloco community big band, of which he is an alumnus and a tutor. All the musicians came together for the grand finale, which also included another twenty-five or so players.

This final cohort was drawn from the junior ranks of Kinetika Bloco, a free-to-access outreach programme akin to Tomorrow's Warriors, through which many of London's finest jazz musicians have passed. Among the graduates are Kavuma—pictured above with (l-r) Ruben Fox, Theo Erskine and Will Cleasby—members of Banger Factory, and the concert's guest stars Theon Cross, from the late-lamented Sons of Kemet, and trumpeter Sheila Maurice-Grey, leader of Kokoroko; most of Kinetika Bloco's highest-achieving alumni, including Kavuma, Cross and Maurice-Grey, give up their time to tutor new student intakes.

The evening started with a breakout Banger Factory trio consisting of Kavuma, on piano rather than trumpet, Artie Zaitz, on Hammond B3 rather than guitar, and drummer Will Cleasby. They performed three tunes: Kavuma's "Cedar Tree" and "Church" and Zaitz's "Lockdown Blues," from Kavuma and Zaitz's nuanced groove-fest Back To Back (Banger Factory, 2021).

The full Banger Factory lineup followed (see Personnel below), with Kavuma and Zaitz reverting to trumpet and guitar and Theon Cross guesting. The ensemble delivered an elegant yet gritty exposition of Kavuma's lyrical modern-day hard bop drawn from the band's sophomore album, The Banger Factory (Ubuntu, 2019), and its follow-up, Arashi No Ato (Banger Factory, 2021): "Mrakpor," a showcase for vibraphonist David Mrakpor, "Arashi No Ato," "Eluid," "Love Will Find A Way" and "One More River." For "One More River," an uplifting gospel-infused piece, the band was joined by the choir.

Kavuma's writing for the Banger Factory ranges from sinewy mid-tempo swingers to pretty ballads, of which there were two tonight, "Love Will Find A Way" and "Arashi No Ato." Best known for his high-voltage shamanistic romps with Sons Of Kemet, Cross's solo on "Love Will Find A Way" was extraordinary, inhabiting a tender, intimate terrain where the tuba rarely ventures. Solos by Kavuma, saxophonists Mussinghi Brian Edwards, Theo Erskine and Ruben Fox (son of Kinetika Bloco's founding musical director, the late Mat Fox) also stick in the mind, as does a lovely one by bassist Michael Shrimpling on one of the ballads (the notes resonate but their precise context is lost in space).

By the set's close, ninety minutes had gone by, though it seemed like fewer. After the interval, Kinetika Bloco came—or rather exploded—on to the stage for the evening's final half hour, playing five tunes from Legacy (Banger Factory, 2021). The opener was Duke Ellington and Juan Tizol's "Caravan," given a storming high-decibel treatment which threatened to blow the hall's roof off. "Remedy," "Honesty" and "Papa Fox" kept the heat on. The final number, the concert's grand finale, was "Echoes Of Palmares."

Just before "Papa Fox," tuba player Andy Grappy, one of the band's elders, stepped forward and recited Wendy Cope's poem "The Ted Williams Villanelle," which was inspired by the American baseball player and is a kind of extended mantra for young Kinetika Bloco students:

During an interview back in 2017, Sheila Maurice-Grey said that the moment she first realised that she wanted to be a jazz musician was when, as a novice trumpeter, she attended her first Kinetika Bloco session. "All those people playing together," she said, "making such a joyful noise. I felt to myself: I want to be part of that." Sitting in the audience, hearing that joyful noise and seeing the delight on the musicians' faces, the feeling was infectious.

It is good to report that the gig was sold out. It must also surely have been among the festival's most enthusiastically received events.