By JOHN KELMAN
September 30, 2014
Sign in to view read count 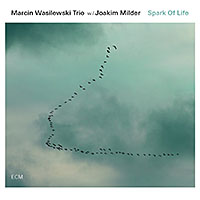 What do you do when you've released three albums as a trio (more, if you include albums released in Poland, prior to coming to the label) for a producer who traditionally seems to like shaking things up after that magic number? For Polish pianist Marcin Wasilewski and his longstanding trio—first coming together in their teens, they've been together more than two decades, and first recorded for ECM with trumpeter Tomasz Stanko for a triptych of evolutionary albums that began with 2002's Soul of Things and concluded with the far maturer Lontano (2006)—there have been two moves in 2014: first, show up as Norwegian guitarist Jacob Young's band (along with saxophonist Trygve Seim) on Forever Young, and now, follow that appearance with another set under the trio's own name, but with guest saxophonist Joakim Milder in tow. Spark of Life is another stellar collection from a trio predicated on the value of longevity and leveraging the opportunities this now late-thirty-something trio has been afforded to build a language all its own.

The Swedish-born Milder is no stranger to either the Polish scene or to ECM, though it's been 17 years since he last made an appearance on the label on one of Tomasz Stańko's most lauded sessions since the trumpeter's fruitful return to the label in 1994, 1997's Litania: Music of Krzystof Komeda. Here, in a smaller, more intimate context, the saxophonist helps make Spark of Life an album that, while rich with the profound lyricism that has imbued Wasilewksi's trio since it first emerged in Poland as the Simple Acoustic Trio, with its own tribute to the great film and jazz composer, Komeda (GOWI, 1995), simmers at a higher temperature...even, at times, approaching (if not exactly reaching) a full boil.

Not that Spark of Life doesn't possess the same elegance, the same rarefied, song-like melodism of previous albums including 2008's January and 2011's Faithful, nor does it fail to capitalize on the innate strength of the trio, which performs six out of Spark of Life's eleven tracks on its own. Wasilewski's "Austin," is as soft and lyrical as the trio has ever been, an inviting opener that creates a strong sense of continuity with what's come before. And if "Austin" seems redolent of the American music town for which it might be named, despite it actually being a dedication to fellow pianist Austin Peralta, Wasilewski's "Sudovian Dance"—which follows and introduces Milder to the mix—turns to a more appropriately Baltic sense of folkloric melody, even as bassist Slawomir Kurkiewicz and drummer Michal Miskiewicz begin to turn the heat up during the saxophonist's solo, hinting at more muscular interaction to come.

Still, Wasilewski's title track—presenting in two variations, first with Milder, but closing the album with a trio-only take—demonstrates that Milder does more than simply light a fire. A rubato tone poem where Miskiewicz's textural support is particularly noteworthy, Milder engages in a piece where interpretation and tone are everything. The saxophonist demonstrates similar developmental patience on his own irregularly metered "Still," while on a by now de rigueuer look at a Komeda piece, in this case, "Sleep Safe and Warm," the saxophonist demonstrates his attention to detail on a track that simmers with a slow-burning pedal point before breaking the tension into its familiar changes, with Kurkiewicz and Miskiewicz treading a very fine swinging line between the implicit and the explicit.

While Wasilewski contributes five of the album's compositions, the trio makes clear that its musical touchstones range far and wide on a series of covers that range from a luxurious look at "Do Rycerzy, do Szlachty, do Mieszcan," from the Polish rock group Hey, that features Milder at his sparest and most refined, to a trio reading of Jazz Police's "Message in a Bottle. Heavily deconstructed and reconstructed, Kurkiewicz delivers his most potent solo of the set, while Wasilewksi demonstrates just how many rounded surfaces he can find in the relatively square corners of such a simple construct—having, in the past, found similar freedom in the music of Björk and Prince. And while he's long been a personal reference for Wasilewski, Spark of Life is the first time the pianist has taken the leap to actually perform a song by Herbie Hancock. In this case, the bright and bubbly "Actual Proof"—performed often by Hancock but first heard on the Headhunters' Thrust (Columbia, 1974)—and here turned into a more liberated and open-ended version that comes as close to incendiary heat as this trio gets, also providing Miskiewicz a rare moment in the spotlight.

ECM has, in its 45-year history, created a number of particular emphases amongst its massive breadth of musical offerings, and one of them has been to take that most conventional of jazz ensembles, the piano trio, and push it into different directions that respect the tradition of American greats like Bill Evans, Herbie Hancock and, looking further back, Lennie Tristano, while encouraging it to incorporate music of other genres and cultures as, at the same time, it strives to assert a clear sense of modernity. Of the young piano trios it has encouraged over the years, the Marcin Wasilewski Trio may well be its longest-standing, and for good reason. Clearly, Wasilewski, Kurkiewicz and Miskiewicz are capable of working in other contexts—Wasilewski and Kurkiewicz, for example, working together on drummer Manu Katche's first two ECM dates, 2006's Neighbourhood and the 2007 followup, Playground—but it's equally clear that it's in the context of this trio that these three young Poles find the most freedom to explore as they please.

With the addition of Milder on roughly half of this 74-minute program, the Marcin Wasilewski Trio has managed to retain its core strengths while adding something new to avoid any pitfalls of predictability. If the at once sublet yet intense Spark of Life is any evidence (along with Forever Young), it's a sure thing that this simpatico trio still has plenty up its collective sleeve to ensure no risk of that ever happening.