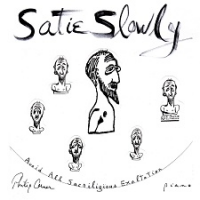 Pianist Philip Corner slows down Erik Satie and shows where Philip Glass, Terry Riley and Steve Reich came from. Satie Slowly is exactly that: the piano music of Satie vastly slowed down compared to most contemporary performances and recordings. The lengthy subtitle to the release says it all: "Avoid All Sacrilegious Exaltation." The large insert, assembled from Corner's papers over the last 40 years, note:

If his piano pieces are so easy why are they so badly played? What they have this must not be violated is an objectivity allthemore solid for being so fragile...they resist all "added expressivity"; they make those who indulge sound ridiculous. Yet nothing is lacking in them.

Satie was a composer during the age of the French Impressionists. Like the Impressionists, Satie's music was subtly complex, spacious and organically precise. Corner's more conservative approach with time and tempo expands what is heard in Satie's solo piano music. Hearing Satie's "Ogives," it is hard to believe that these pieces were composed a half century or more than Glass' Piano Music.

Corner's playing is deliberate and intense, produced with the effort of restraint. This affects Satie's compositions as if seen through a crisp magnifier shining light on every crevasse and crack present. Satie may not be Chopin, but he might be considered the French Scarlatti of the 20th Century. That's how Corner plays it anyway.