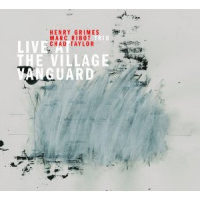 Playing and recording at New York's Village Vanguard is often seen as a sign of ascendancy in the jazz world. For some, the honor is bestowed early on; for others, it comes at a more mature stage; and for a third group, it comes even further down the road. Guitarist Marc Ribot is part of that third group.

This protean rabble-rouser has been an important part of New York's artistic landscape for decades, contributing to the music in more ways than anybody could ever count. His guitar has helped shape the sound on recordings from Tom Waits, Elvis Costello, John Lurie, Sam Phillips, Caetano Veloso, John Zorn, Joe Henry, and numerous others. His own efforts, documented on smaller labels like Pi and behemoth imprints like Atlantic, include audacious offerings and tributes to such disimilar figures as Cuban icon Arsenio Rodriguez, avant-garde giant Albert Ayler, and Ribot's mentor, Haitian guitarist/composer Frantz Casseus. Given all of this information, some may wonder why it took so long for Ribot to end up at the Village Vanguard. The answer could have something to do with the unpredictability behind his work or the fact that his music usually leans far to the left of what that legendary club typically offers. Regardless, it was nice to hear that he finally broke into that venue in 2012, and it's a good thing that the moment was captured for posterity.

The ghost of Albert Ayler, John Coltrane's Sun Ship (Impulse, 1971), and the durability of the standard are the three themes that Ribot and company focus on during Live At The Village Vanguard. The guitarist and his band mates—drummer Chad Taylor, who's every bit as wonderfully unpredictable as the leader, and bassist Henry Grimes, who had last played the club with Ayler more than forty-five years before this album was recorded—go to town on the Coltrane and Ayler material. The program begins with Coltrane's "Dearly Beloved," which takes a long journey. The meandering arco bass of Grimes, accompanied by the whispers and clinking glasses of the audience members who were unaware that the show had started, leads to group calibration, swelling sounds, aural avalanches, and beautifully caustic antics that boil over. "Sun Ship," on the opposite end of the album, is more compact and blunt. It's ornery from the get-go. Ribot throws in a couple of zany, twisted quotes during his solo, and Taylor is wonderfully turbulent.

The Ayler material has a different character to it. "The Wizard" comes out like avant-garde rockabilly, but fractures and fissures start to appear. This leads the trio to go off the rails, devolving as time marches on. "Bells" strikes a deeper chord in the mind and heart. Ribot's thoughtful guitar work leads to stirring ideas, but Grimes' solo leads to a more curious path. A slice of Americana arrives near the midway point of the song, with country-meets-folk-meets-bluegrass allusions, giving Ribot and company new material to twist and contort.

It's odd to say that fairly direct interpretations of standards could be a surprise on a jazz album, but such is the case here. Ribot has made an art out of avoiding the expected, so the inclusion of "Old Man River" and "I'm Confessin' (That I Love You)" prove to be more shocking than the more abrasive moments on Live At The Village Vanguard. He trades solos with Taylor in controlled but gleeful fashion during "I'm Confessin (That I Love You)," and he delivers a tart-toned tale during "Old Man River." Grimes, renowned as an outside player, proves that he can work inside with the best of them.

It would be overstating things to say that Ribot's engagement at the Village Vanguard, and this album documenting it, signal mass acceptance of his work. It wouldn't, however, be unfair to say that they indicate a growing audience for his magnificent and multifaceted artistry.