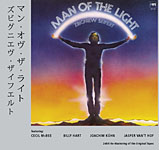 If ever a title was in need of the wider exposure it eluded when first released, it's Polish violinist Zbigniew Seifert's unparalleled Man of the Light—finally seeing the light of day thanks to Promising Music's ongoing series of remastered re-releases from the German MPS label of the 1960s and '70s. Seifert's death from complications from cancer in 1979, at the age of 32, cut tragically short a career that had only begun its upward trajectory in North America with his outstanding collaboration on Oregon's Violin (Vanguard, 1977) and his own Passion (Capitol, 1979), featuring guitarist John Scofield, pianist Richie Beirach, bassist Eddie Gomez, drummer Jack DeJohnette, and percussionist Nana Vasconcelos.

But Seifert—who cut his teeth playing alto saxophone with Tomasz Stanko in the Polish trumpeter's quintet, immediately following legendary Polish composer/pianist Krzysztof Komeda's departure for Hollywood—had already begun generating attention for his fiery violin work on dates like saxophonist Charlie Mariano's 1976 fusion outing, Helen 12 Trees (MPS/Promising Music, 2008). Few were prepared, however, for the sheer power and unrelenting beauty of 1977's Man of the Light. At a time when the violin was experiencing something of a jazz renaissance, Seifert trumped all around him, suggesting how saxophone icon John Coltrane might have sounded, had he picked up a bow rather than a reed.

Seifert wastes no time combining Coltrane's "sheets of sound" with a folkloric melodism rooted in Polish traditionalism on the fiery "City of Spring." German pianist Joachim Kuhn plays with the intensity and modal vernacular of Coltrane's pianist, McCoy Tyner, but evokes a more personal sound through his unmistakable European classicism and near-reckless abandon. Bassist Cecil McBee and drummer Billy Hart play with equal exuberance on this breathtakingly up-tempo opener that sets the bar high for the rest of the set, while Seifert delivers a solo of cathartic virtuosity. The title track, based around a visceral, mid-tempo 5/4 ostinato, is just as thrilling, with Kühn and Seifert contributing solos as captivating and relevant today as when they were first recorded in 1976.

Seifert also proves capable of compositional depth and passionately beautiful calm. "Stillness"—a duet with McBee, but featuring Seifert's overdubbed violins as a mini-string orchestra—is, indeed, based on relative stasis and a spare set of changes, with McBee's robust-toned solo of equal lyrical mettle to his ever-ardent leader. Overdubbing himself again on the similarly expansive "Love in the Garden," Seifert engages in a transcendent duet with Dutch keyboardist Jasper van't Hof, capturing a spirituality akin to Mahavishnu Orchestra Mark II's more tranquil moments on Apocalypse (Columbia, 1974).

"Turbulent Plover" swings with attitude—another modal workout for the quartet that features Kühn's most expansive solo of the set—while "Coral" ends the album conclusively, perfectly balancing the album's multifarious touchstones. It may only last a scant 42 minutes, but Man of the Light is a true desert island disc; one of the most exhilarating, important, and underexposed jazz albums ever recorded, and all the more tragic for its largely unfulfilled promise of even greater things to come.

City of Spring; Man of the Light; Stillness; Turbulent Plover; Love in the Garden; Coral.